An interview with the creator of Beautiful Escape: Dungeoneer

Hello and welcome!
This is yet another entry in my regular series of interviews on rpgmaker.net. The goal of the series is to further promote RMN's featured games and creative minds behind them.
It's great to see a game from Calunio featured. Back when I joined RMN he was one of the prominent developers with an interesting take on the engine and a very analytical reviewer. We still chat about his games from time to time, because their themes are completely different and their mechanics original. Beautiful Escape: Dungeoneer is one of his better known games. I would say that gameplay mechanics reflect your avatar well. This game's about sadism and torture. If you're interested in this dark twist on dating sims, you can read a proper description and download it here. 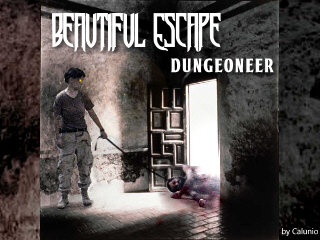 Thanks for letting me interview you. How are you doing?
Doing great, thank you! I appreciate the opportunity!

Could you introduce yourself?
My real name is Nicolau Chaud, I'm 37 years old, and I'm a psychologist and psychotherapist currently working on my doctor's degree. I started making games in 1997 as soon as I started learning to program. My first experience with RPG Maker was with RM95, way back. The first game I made for other people to play was Alvorada do Mal (in my native language - Portuguese), which I started in 2004. It was a very ambitious project, had a good reception, but even though I worked on it for almost 10 years, I never got to actually finish it. That's because in 2009 I entered a contest in an RM forum called Gaming World with the theme fanboys, for which I made a way less pretentious game called Marvel Brothel. It took some time, but it got a huge reception, reaching a peak of 1k downloads/hour before it was taken down for copyright issues. But in that moment, I decided I would drop Alvorada do Mal and work on projects in English, because they had much better reach. One year later I made Beautiful Escape: Dungeoneer for an RMN contest, and a bunch of other games since then.

How does it feel to get your game finally featured?
Feels really, really good. Not just because "yay, people like my game", but because RMN has a special place in my heart and in BE:D's history. When BE:D was released, it got mixed receptions in the community, including a bunch of pretty harsh and negative feedback to the point of "this game shouldn't have been made". It didn't even get 3rd place in the contest for which it was made. Also, I've been in RMN for almost 10 years, and it's the first time I have a featured game. Having it featured now is very meaningful to me.

4. Beautiful Escape: Dungeoneer has a very original theme, what inspired you to make a sadist game?
The contest's theme was "escape". My first idea was to make a game in which you were a rat trying to escape from a mad scientist's lab (which takes me back to my psychology lab background). But I like dark themes. So I changed to "human trying to escape from mad scientist", then "you're the mad scientist capturing humans", then "rich and powerful sadist who captures humans". But I prefer stories that are more relatable. So I decided the protagonist should be a loser instead of a rich and powerful man, and I created the whole Dungeoneer community inspired on RMN and the whole thing about being a community in which people appraise each other's art, sometimes in a really mean way.

Is the difficulty part of the experience? I found it impossible to break my first victim.
Not really. The first torture is indeed a bit harder, first because you have less equipment, and second because you might not be used to the mechanics. But if you just want to kill the victim (which gives you a low score but not a game over), it's not that hard.

Are there things you would make differently, if you were making the game now?
I never thought about that, but I don't think so.

What obstacles did you have to overcome when developing Beautiful Escape: Dungeoneer?
I'm not sure I would call them obstacles, but making the game was a very intense experience. First because I pretty much abandoned everything else in my life for two weeks and dedicated 10-13h/day on it. Second because I like doing research on my topics, and researching torture isn't without its tolls. But I'd be lying if I said I didn't enjoy all of it.

What is your favourite part of your game? Is there something you feel gets overlooked by its players?
I don't think I have a favorite part. Maybe the ending. The whole game is very personal in many ways. Regarding things that are overlooked, nothing important, but two things might be worth mentioning: there's a button (I don't remember which, maybe shift or 1) that if you press during a torture session, you hear a creepy laughter; and there are a few scenes in the game in which you'll see a small red dot blinking at the top right of the screen, indicating that moment is being recorded by Daily. 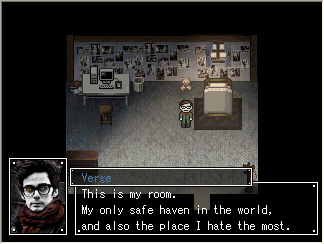 
How would you compare Beautiful Escape: Dungeoneer with your other projects? Do you think it was the right choice to feature this one over the others?
BE:D is my favorite game. I believe it's the best game I've ever made. So, yes, I think it was the right choice. Some of my other big projects (like Marvel Brothel and Polymorphous Perversity) aren't even on RMN; the first due to problems with Marvel, the second due to its theme.

My first RM encounter ever probably was Polymorphous Perversity. How did you come up with that and what is it about?
It always bothered me that sex is always implicit in games, if present at all. And even sex games are usually very small, repetitive, bland and overall pointless. I wanted to make a game that was overloaded with sex in the most explicit way possible (within my pixel skills restrictions). I was also inspired by the creativity and freestyling of Space Funeral, so I wanted to make a game that didn't have to be so constrained by usual and logical rules. That was my starting point. And then I started researching sexuality, fetishes, and made a game that was interactive from the development - players got to send pictures and share fantasies that were used in a game. I'm happy with the result.

What are you cooking up right now?
I'm working on a game called THERAPIST. It's a life simulator, and it's the story of a mentally troubled psychotherapist who needs to learn how to handle a sex offender patient while dealing with his own life issues. I'm excited, but not working on it as often as I wanted to.

Is the game going to be commercial? What is your stance on commercial indie vs. hobbyist?
Probably not. I don't want to make money with games. I thought about making it commercial because, strangely, people care more about things they have to pay for than free things. But I also love to use music that is copyrighted, so... we'll see. I make games as a form of expression and art. I feel like if I charged money for those games I might be too concerned about the reception of it in the wrong way. I think it would affect my choices in a way that would make the game worse, or at least make the process of doing it less enjoyable. So I'm a hobbyist. But nothing wrong with commercial indie.

What do you think makes you unique among other devs?
I make games no one else would make.

How does your working process look? Do you have any quirks?
My last game was Suzy and Freedom from 2013. I'm in a great hiatus since then. I started working on THERAPIST this year, but it's been too slow, I'm not sure I'd even call what I do a "working process". Something I could call a quirk is that, maybe in searching for more motivation, I feel the need to show every single pixel I do to someone. My friends are tired of seeing my screenshots!

Is there an advice you would give to a developer making their first game?
Don't expect to make a great game, or even finish one. There's usually a huge difference between the game we idealize and the game we end up making. And the gaps between the two are things we learn from experience. You'll learn a lot from your first game, so much you'll want to abandon it and start over, and that's fine. Don't get too attached. But as you collect experience, try planning your games better and work on things you feel like you can actually pull off.

Anything else you would like to share?
My profound admiration for anyone who makes games for free. 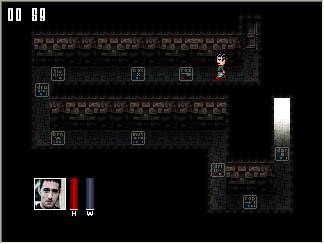 
You got my admiration too. Thank you for taking your time and responding to my questions. Good luck with your degree and with THERAPIST.

Close
11/06/2019 12:48 PM
Nice interview! Calunio's definitely one of the developers that really inspired me in that, truly, they do tackle games noone else makes with all the good n bad attached. (playing the game was an incredibly disturbing experience. researching and making it must've been even worse.)

author=Kylaila
Nice interview! Calunio's definitely one of the developers that really inspired me in that, truly, they do tackle games noone else makes with all the good n bad attached. (playing the game was an incredibly disturbing experience. researching and making it must've been even worse.)

I'm glad my games inspired you like that! In light of that, can you recommend me any one of your own games?

If Verge was a random rich man, the game would be way more generic and flavorless. Unless the rich man was also troubled in some way. We're living a time in which no one likes perfect characters anymore. We empathize with troubled and problematic (see Joker).
Kylaila

You've definitely inspired me in how I interpret and value art, in realizing what is possible, and how valuable the unpleasant can be... but I feel I haven't quite translated it into making something. I'm afraid I'd have to disappoint you if you crave something truly thought-provoking, but then I haven't really looked back over the games I made. I'd pick Sorceress to Be if I had to choose one.

My poetry would be a bit closer, but poetry's poetry.
That said... damn, that really does hit home. Maybe I should. I'd feel proud of that if I did something with actual meaning in it. There are a number of experiences which aren't quite pleasant that I could well work into something.
TheRpgmakerAddict

Close
11/11/2019 10:39 PM
Nice interview! I always find Calunio's games, even those considered controversial and disturbing to be also quite deep and singular. It's a distinct perosonal style I like a lot. Alvorada Do Mal is my favourite, even if incomplete, it's a setting and a story I liked a lot.
JosephSeraph

Close
11/16/2019 02:11 AM
Beautiful, loved hearing the Origin Story / morphing of the idea for BED. Also, the wya you described PP made me want to play it (Which, admittedly, I didn't, kinda, when it released. Didn't seem like my cuppa tea. But yeah this good)

By the way, feel free to bother me with ur pixelz on Facebook. Oh, and also! It's not a bad idea to spam ctrl+v on twitter. I also need to show every single pixel I do lmao, so, uh... relatable. It keeps you going, longing for that metaphorical biscoito.
shinesfox
0