A BOSS GUIDE TO BOSSES: PART 1

Let me boss you around a bit as I talk about my favorite element of video games: the boss.

A Boss Guide to Bosses: Part 1

Everything that follows is a guideline based on my experience, and is not an absolute. There are times when ignoring this advice will improve your design. Still, knowing the rules means you can be even more clever when you break them!

By the way, this article is written for novice designers, and focuses specifically on gameplay, aesthetic, and story design for bosses. It won’t cover the more technical aspects of code or art. It's not specific to any genre, either: it's my hope that designers of action games, RPGs, and even puzzle games can make use of this while creating their challenges.

I imagine most folks reading this will have a specific concept of “boss” in their head when they read this. We think of characters like Bowser, Sephiroth, or Ornstein and Smough. This is the traditional video game boss: an ultimate enemy much more powerful than any around them. 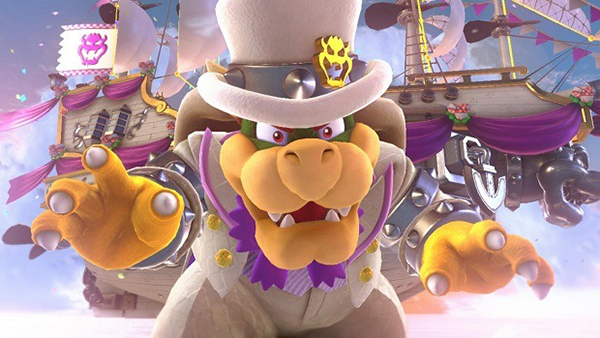 Bowser is every boss cliché in one: he’s big, he roars, and he takes three bonks to defeat.

However, not every genre has super-powerful enemies, or even enemies at all. The design suggestions in this article are open-ended and should be applicable to a variety of genres. So, from here on out, when I use the word “boss”, I’m referring to any element in a game that does two things:

Depending on the game, a boss could be a harrowing platforming section, puzzle, or escape sequence. In a strategy game, it could be a map where you’re surrounded by foes and the odds are stacked against you. If it demands the player prove their mastery of the game while creating a satisfying burst of emotion, it’s a boss. 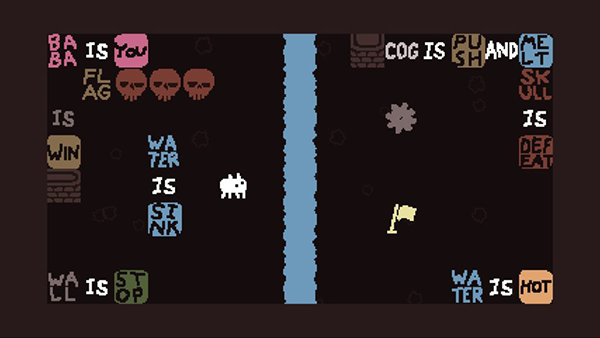 Baba is You is a puzzle game that often follows this pacing curve, teaching you new abilities and then boggling you with complex combinations.

A Test of Mastery

A great boss in a video game is like a great (and too rare) boss in real life: respectful, hard-working, and continuously challenging you to improve and reach your potential. They are fair and they want to see you succeed, but they will spot your obvious flaws and make you very aware of them.

Or, to use another common analogy, games teach gameplay in the same way a teacher teaches long division:

You get a short lesson detailing the core mechanics.


You do some homework to expand and practice in various situations.


You take a final exam that pushes your mastery of the game in a threatening situation.


Notice that the majority of games spend most of their time in the “homework” section. During this time, the player has fun taking things slowly, experimenting with the tools we’ve given them and figuring out the best method of making progress. We slowly introduce new mechanics, such as jumping, sword-swinging, or switch-flipping, and present them to the player in various combinations. There are some challenges along the way, but very few brick walls.

The boss is the final exam that asks the player to prove how comfortable they are with the game, and simultaneously gives them a chance to show off their style. By the time they reach the boss, we’ve taught the player all the tricks they’ll need for victory. If it’s a platformer, the player should have a reliable sense of how fast they can run and how far they can jump. If it’s an RPG, the player should know the skills available to their party and how to combine them effectively. 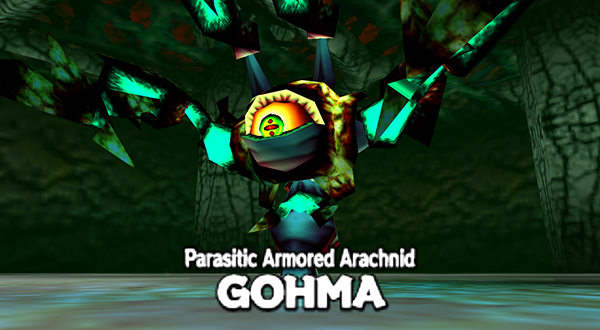 Zelda bosses like to test your skill with your newest gadget, and Gohma is no exception: you can't beat her without knowing how to aim a slingshot.

Our boss should rely on variations of mechanics the player is familiar with and avoid anything wildly new that requires explanation. Asking a player to dodge fireballs when they’ve already dodged lasers is natural. Asking them to learn the controls for a gun when they’ve only used a sword is confusing. Boss fights are stressful by nature. A stressed player can handle learning small tricks, such as a boss’s attack pattern, but they can’t handle big changes like a new control scheme. There are exceptions, but we’ll get to them later!

Part of facing a memorable boss is the excitement! Bosses are almost always at the top of the pacing curve. The levels immediately before should climb in difficulty, and the boss should be the peak. Our game has a core emotion it’s trying to evoke in our players - triumph, horror, cleverness. Once we figure out what that emotion is, there are a ton of approaches we can take to make sure our boss creates a swell of that emotion.

A difficult boss that takes many attempts to defeat is memorable because it creates a powerful feeling of struggle. Striking a balance between challenging and frustrating is difficult, but players are much more likely to remember a boss that gave them a rough time. This is the kind of boss that makes someone cheer when they finally win, and creates moments they’ll bring up with their friends when talking about the game. It’s hard to remember a boss that is defeated quickly and easily, even if the fight is unique. The player simply doesn't see or think about them long enough. This doesn't mean your boss needs to be brutal, but if you want the player to remember that boss, you'll want a boss that makes your player think a bit. 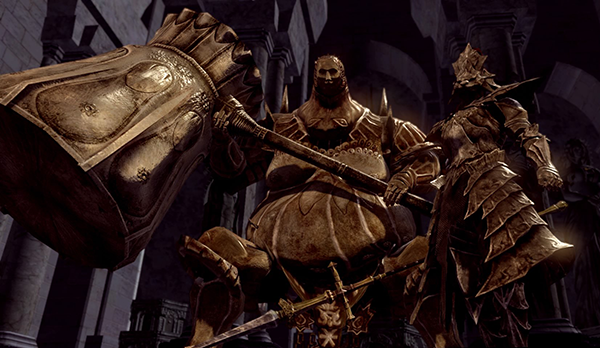 Ornstein and Smough are a large difficulty spike, ending the first half of Dark Souls in a unforgettable struggle.

It can also be important to build up a boss’s personality. This is easily done by easing the boss into the game via the story, which creates anticipation for the fight. If a boss is a recurring character that the player interacts with multiple times, the player will attach more meaning to them. The boss could be an ally that betrays the hero, or a frightening area that has been whispered about by NPCs. Flaunting a villain early and often will get the player itching to knock them down a peg.

Having a boss reappear later in the game for a rematch (with some new moves!) is another way to utilize this build-up. A great example is Ultros from Final Fantasy 6. He appears early and is quickly established as comic relief, breaking up the game’s otherwise serious story with constant jokes and slapstick. Plus, he returns multiple times, making what could be a forgettable one-off enemy into many players’ favorite boss. Try to weave bosses into the plot as much as possible. 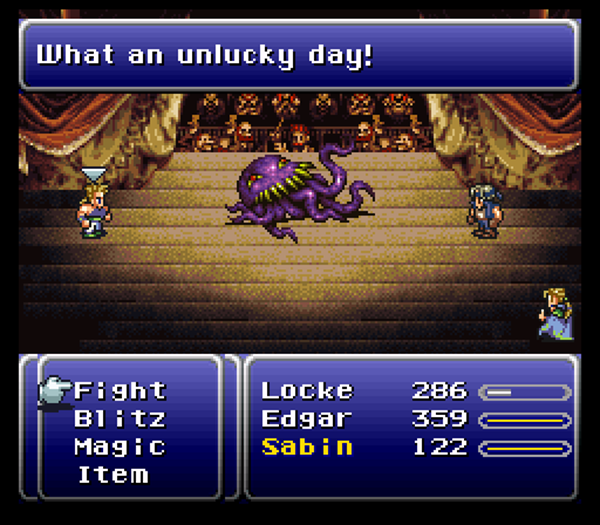 His ridiculous design and vivid personality makes Ultros one of the most memorable bosses in the Final Fantasy series.

Another way to draw excitement is a distinct audio & visual design. Our boss should stand out from challenges before it. There are several ways to accomplish this, such as:

The goal here is to differentiate our boss from the rest of the world, so our player knows that the stakes have been raised. Traditionally, bosses are much bigger than regular enemies, making them more intimidating. However, if the enemies of our game are all huge dragons, the sudden appearance of an relatively small human knight will be even more unsettling.

Be careful when planning boss designs, though. Since the unique aesthetics is part of what makes a boss memorable, the associated assets are often used only once. Trying to give each boss their own musical theme, for example, will balloon our composer’s workload. If we can find clever ways to reuse these resources, we can save ourselves a lot of effort. This is one of the reasons we see so many bosses appear as regular enemies later in a game, and why so many games have boss rush modes.

Finally, since the boss is the peak of the excitement curve, we have to let our players rest afterwards. This is called denouement, or falling action. It gives the player a chance to take a breath and allows them to absorb their accomplishment to remember later. It can be tempting to string multiple stressful scenes back-to-back while trying to raise the excitement peak even higher, but this will exhaust players and create a blurred picture of what happened. It’s best to follow a boss with some quieter scenes, or a relatively peaceful area to explore. After a pause, we can begin to raise the pressure again with new enemies or mechanics.

Now we know what any boss needs to feel satisfying and stay memorable. Stay tuned for part two, where we’ll walk through the steps of designing a boss from scratch!