Floating numbers are cool, they pop, they stand out and they relay information very quickly. Modern AAA games such as looter shooters or RPG heavy open worlds rely on them heavily still, so they're a huge UI staple in game design. This is not a tutorial/guide "what you should do" but more of "here are some things to consider..."

Probably the simplest way to display damage, much like a console output you simply print the damage, who did it and which person got attacked. I wasn't even going to count this as a "damage pop up" but it's worth noting that they didn't start appearing until Final Fantasy 3 (Maybe the first instance of it? Someone please correct me because I don't know for certain). But this is as fundamental as you can get other than making it invisible.

What I find interesting is that FF1 feels log/print based but gets rid of the descriptiveness of it, showing that they definitely wanted numbers to be as straightforward as possible. So it's no surprise they arrived at: just put the number above the enemy, the player gets it.

There are many ways to animate the numbers. The most simple animation being to have them float upwards, this makes it useful if there's more than one number. But the bounce I think just naturally adds to the "pop" flavor, the satisfaction of landing a hit. Ragnarok Online has some of the more advanced ones for its time, it bounces to the side, it scales down, it fades into the nothingness. It becomes less visible the less relevant it is. If there are going to be a lot of numbers, they better look good!

An important commonality I’ve noticed is that when numbers shrink they don’t shrink all the way, they should always be somewhat readable even if they’re getting smaller or enlarged for a few seconds.

This should just be included in animation, but this also applies to static as well (Octopath Traveler for instance). Digits are pretty much the main thing that makes a number "separated" so using basic animation principles you take what you can get to create any kind of wave/arc or motion in such a text based thing. Later dragon quest games do something neat with "stagger fading" them illustrated in this frame by frame:

Point is digits can be considered separate elements, and it's worth thinking about.

"Damage" is a bit misleading since numbers can be more than just relating to character HP. HP recovery, mp restoration, getting poisoned, etc. Though it's worth thinking about if healing should be animated/colored differently than damage, maybe it just floats up slowly and less erratic than its negative counterparts. Miss/dodge should be weightless and fluttery, and deny any kind of satisfaction, or maybe feel like a relief. Perhaps getting damaged by the enemy could be animated differently from getting damaged? The possibilities are endless!

This is going to be a personal thing and yet another thing to think about. In my opinion the more cursive the more ugly, the more compact and monospaced the more readable. I guess there's just something about the symbology of numbers that makes "compact" more correct. Or maybe I'm just brainwashed by the RPGs that did it first. Xenogear's damage font is a huge no no for me but uh, don't let me stop your dreams if that's something you really believe in.

Hey did you know Paper Mario displays a different amount of stars depending on how much damage you did? Me neither! I guess it's better felt than seen. Regardless Paper Mario does not fuck around in this department. The problem with animating numbers is that it can prevent readability, so why not animate something else behind it? The number only merely moves but you can convey the impact more clearly with secondary elements. Also imagine if you were unable to read numbers or the numbers were disabled in an emulator for some reason, you could probably still tell what's "bad" and what's "good" based on the elements.

If you can't pull off combos in a fighting game, you can at least PRETEND that you are. Whether attacks have multi hits for aesthetics purposes or there's actually a branching combo / timing system, it's probably a good idea to display total damage or number of hits. Though there's something to be said about the aesthetics of NUMBERS EVERYWHERE as more of indicator than the values themselves. There's something primal about it... Valkyrie Profile does not have total damage indicators as far as I can tell, but it does have an hp bar that represents the entire enemy party's health. So numbers are less relevant and more for pleasure in this case.

Main thing I find interesting about multi hits is that the animators are more involved in when the numbers appear. Programming wise, you'd assume animation would play, then the damage number. But with multi hits you want the numbers to spawn per hit, and that requires timing. Animation editors in Unity and Godot let you call scripts during frames of animation. It's a method worth heavily considering even if you aren't about crazy combos. But it means further communication between animation/coding work flows.

As a side note DQ's multi target AOEs are interesting to consider. They're a bit offset so you don't just see the numbers appear all at once. It's still pretty quick, but I imagine the more targets the longer the numbers take to fully appear one by one. So the extra bit of milliseconds help with taking in the information.

This also ties into the concept of just, number spam as a way for the player to express themselves. MMOs are going to have more numbers due to the timing and pacing of the battle systems so numbers are just going to naturally appear more often. Makes sense right?

This character build in Ragnarok Online is a "crit sin build" It has a high chance to crit, chance to double attack, chance to auto steal etc. We call this "stacking procs" they're fun as hell. Here's the thing: in previous versions of the game, you could not double attack a critical strike, they were considered separate. This is IMO a design flaw as it prevents synergy but it was likely due to some GUI limitation. Double attacks or multi hits in RO will display multiple faint numbers then a yellow total. In this fixed case, you see two critical strikes and the yellow total, but also two normal numbers and the same yellow total. The developers probably wanted to avoid this originally. It's hard to tell which critical were part of the double attack but you can at least feel it in the sound effects.

The player isn't thinking about each individual number anymore, they're thinking "What's my highest damage, what's my DPS? How long does it take for me to kill this thing I'm farming? What's just the first digit?" The numbers are still necessary but in the grand scheme of the game the numbers relay something more long term. The animations and difference between number types are going to matter more. If stacking procs is the point of the game than it should feel or look different as you stack more and more or add variety. All of it becomes a blur but it all adds up to be an impression of your character's power.

Point is, it's worth looking at how it all comes together. If you were to spam numbers together, can you tell them apart? Does it feel good to add more and more numbers, or is it just confusing. Are there going to be different possibilities for different types of damage and states? Are there contradictions in those differentiations?

Anyway that's all I got, feel free to suggest anything I missed or worth considering, or just thoughts in general. To me this is merely a start in detailing this aspect of RPGs. The only page on the internet I can find on this subject btw: https://www.giantbomb.com/damage-numbers/3015-2106/

Aesthetics and how it feels is all very important for the game, but I think that the most important aspect is still "easy readability" regardless of what style you use.

Graphics can add a lot of flavor to a game, but they should never impact negatively on gameplay.

I also prefer a single number instead of several, since it's easier to take the information in and gauge how strong it was. Multi strike attacks with several Damage Number pop-ups tend to seem weaker even when they are not.
Red_Nova

Close
04/09/2021 01:43 PM
One thing to expand on for the Fonts section is that, like iddalai said, the numbers need to be readable immediately, especially if they won't stay on the screen for very long. The Persona 5 example, while nice and stylish, could have benefited with just a little space between each number to keep them from blending together when trying to read them. Even I still have a hard time reading them sometimes, and I've beaten it 3 times across vanilla P5 and Royal.

I know that hating on Comic Sans is a bit of a meme, but the font is actually recommended by multiple Dyslexia groups because the distinct shape of each character helps Dyslexic people read them. Other examples of fonts good for the visually impaired are Arial, Times New Roman, Veranda, Harrington, and Lavanderia.

And in case there's any uncertainty... 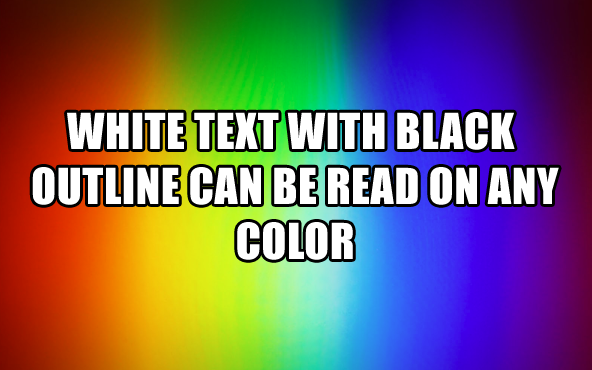