DISCLAIMER: This piece is an extract of the article released on 8th november in Ludi Tarantula Archives. I didn't release all article largely based on the use of images, but we hope that this can be an interesting point of contact for you! Enjoy!
_______________

Why did you released this extract here?
We released this extract here because, in two days, it will be released a very important analysis article of a game based on a problematic narrative structure. This is a new generation in which gamers demand more and more stories to passionate themselves, and before share with you an example of case of study, we thought was important to do some prologue parts with some theory of storytelling, in fact, I released here only the preview based on a recall of linear narration definition.


So, you will have understood what I am talking about, of course, about storytelling in the context of Horror RPGs! Well, after all, it was also the title of the article. Yup.

What to say, we started this year's season with a lot of premises and discussions but finally we will be able to begin to resume together the slightly more theoretical approaches, in the article on Purgatory I had badly run away ... I was looking forward to this one!

What are the premises for this article?

To begin with, the advice I propose is that I am not a scholar of some kind of videogame storytelling class. Everything I will say here is based only on the observation I had the opportunity to make during my experience with Horror RPGs.

What I noticed in general, even though I'm ignorant on the subject, was that in the world of video games the narration has never been an element for which the media has distinguished itself and the complexity of a plot is also scarcely considered in a proper manner, not to mention the issue of multiple endings. It is not only in the context of RPG Horror or in Japanese titles such as the various visual novels and route models, many Western titles also seem to take advantage of this method. I could mention titles like Detroit: Become Human which are based on numerous endings depending on the game choices. Many have considered it as an admirable operation and to be commended, I can understand why, but. There is a but.

It seems to me a "too comfortable" move. What I ask myself is how much it is worth staggering the responsibility of entrusting the player with the progress of a story, I would see it as an excuse to never make a final decision. Leaving aside the cases where the story is linear and technically only an ending is right, I take advantage of this premise to state that the theme of the endings is the last thing we will worry about in this article.

I know it had to be said, because it is now one of the key features for which RPG Horror is known, indeed, one of the few formalities in the narrative field for which the genre is recognized.

By making a short historical re-cap we try to remember one of the key elements of this genre: the clues inherent to the storyline are discovered during the exploratory phase which often distances itself from the part of a story in which there are cutscenes. Good.

Then we will remember that Mad Father introduced and made the public recognize the basics of linear narration in which the discovery of the clues of a story are strictly limited to a precise context (we are referring in particular to the RPG Horror current). Let us remember, perfectly introduced the theme of linear narration in an area as wide as the videogame one  in which everything is in the hands of the player.

Let's review this concept for a moment, I leave you this outline here. 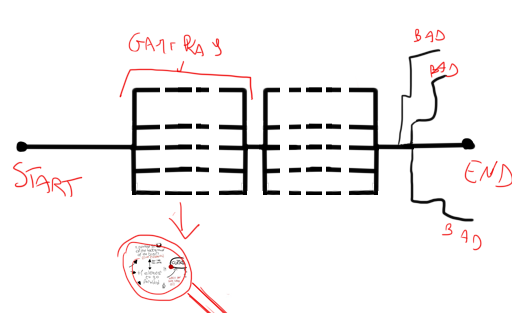 We have the unique narrative line, the parallel dotted lines you see are all those clues and flashbacks that are scattered throughout the game, but then as you can see they all come back to a single narrative line that never stops being only one and stable and based on the cause-effect relationship, a feature that is already distinguished by the fact that the gameplay phase the level of action and understanding of the story is, however, different from the “big scenes” that carry on the plot. And this goes on until the final act, to be exact the reaching of the breakpoint in which the endings branch out only in the context of the conclusive climax, these lines as you can see go well with the scheme on the free gameplay that Ele had done in the article dedicated to Mad Father.

As you can see I marked the endings with thinner lines to indicate the little impact on the main narrative line, the game makes you understand very well the chosen path. The various “bad ends” are different consequences to types of events, do not distort the personality of the characters.

At this point you must have understood one thing: the narration I am referring to refers only to the text. The text is the game itself and is read, understood and interpreted just as one reads a sentence.

What we will do in Back To The Future as soon as we get back to the rubric is compare the text with the paratexts. Actually we already do, we talk about paratexts whenever we talk about packaging , but now you can realize how much the relationship between text and paratext will be extremely important for the generation of storytelling, Pocket Mirror has just met a collision between these two elements, for example, causing a drop in a certain type of audience expectations; they are “road accidents” that can be encountered in the context of the creation of an audiovisual product. It will be one of the many parentheses that we will open on storytelling because the art of narrative in the audiovisual market is closely linked to the production sphere , therefore it will be inevitable to consider the context and the production intentions that have a significant influence on the language adopted by the telling a story.

We had a great example in Corpse Party, from the ’96 version made for a contest by an independent author, he just concentrates the information in the finale in order to bring the gaming experience to the fore. While in the version later marketed the priority is to categorize the characters and expand in a more deterministic and clear clues to the plot : let’s take for example the death of Sachiko, the more evident example. In the 1996 version it is summarized in a wall of text , in its commercial alter ego it is shown to be clear and understandable to as many users as possible.

So, after having also concluded our parenthesis, why then are we proposing this article? Why talk about alternative techniques to linear storytelling?

Let’s try to take up a concept mentioned in Mad Father.

Even if the linearity certainly allows to have a wider and potentially interested audience in the story, this does not take away the potential interest of public in more sophisticated style of narration (for example with construction of subtexts) that can be used not only as an alternative style of narration but also as a complementary line to the main plot.

… We can finally start talking about the three ways adopted by Horror RPGs to propose a story!