Visual Novel Maker is an engine created by Degica. Degica is mostly known for publishing the RPG Maker series created by Enterbrain. The engine was on Steam for a long time prior to release. The launch day for the engine was changed a couple of times, but it eventually was released on November 17, 2017. (As of writing this review, that was 4 years ago.) It released at starting price of $59.99 USD.

Visual Novel Maker uses JavaScript and CoffeeScript, but no knowledge or coding is needed to understand how to use it. Instead it has a list of commands that you can drag and drop. You want to show a character, drag the command and choose the character you want to show. Once you get into the rhythm of developing, you would be surprised at how fast you can whip up a game. Like the RPG Maker series, Visual Novel Maker comes with default assets (and as of writing there are a ton of extra DLCs you can purchase along with it.) For having resources to make your game with, this engine is top notch.

Visual Novel's main competitor is Ren'Py (There are other engines, but most people looking at Visual Novel Maker will compare it to Ren'Py.) Ren'Py is a free and open source engine that uses Python. Ren'Py is actually very easy to pick up and learn. After fiddling around with RPG Maker VX Ace for a couple of years I decided to pick it up and make a game with it. Ren'Py also has a lot of documentation and a huge community supporting it. The engine is also frequently updated. For a smooth experience that has been cooking in the oven for a long time, you can't beat Ren'Py. 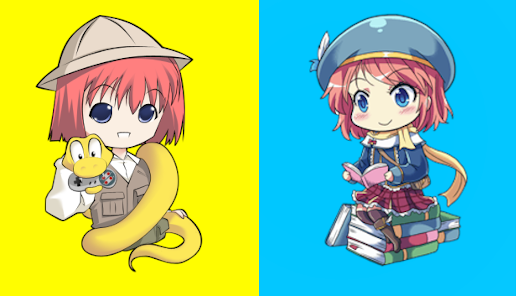 Let's look at the positives and negatives of both engines.

Ren'Py
+Free to use.
+Open Source.
+Easy to get into.
+A huge community.
+The python library is big, big, big.
+The engine gets updated all the time.
+When you search something you want to do in the engine you can find an answer.
-Time consuming to do simple things, like show a character or background.

Visual Novel Maker
+Fast and easy to make a game.
+Easy to make your own UI with and install in game.
+Hotspots were an awesome feature.
+A live preview window.
+Lots of assets, like it ridiculous to count them at this point.
-Bugs, bugs, bugs.... It's a buggy mess.

The release state of Visual Novel Maker was plagued with bugs. It worked, but it worked in a wonky way. Think of how Cyberpunk was released initially. You could play it on PC sort of okay, but it was a hot mess on the consoles. And I have to give credit to Degica, they really worked on the engine. they even released some extra assets for free.

The problem is that 4 years later... The engine still has some problems. Just the other day I started my game and the sound didn't come on. I also had a problem with someone who purchased my game and got a black screen. When I tried to use the translation feature, the engine froze. In my development time I have been contacted by a couple of developers asking me if I could help them with certain problems (one of those developers actually went on to make a pretty successful game using Visual Novel Maker. Then for their second game they ditched the engine.)

I purchased Visual Novel Maker on its release date. I made 3 commercial games and released them on Steam. And I'm planning a 4th game... And it's going to be made with Ren'Py. And it comes down to the simple fact that I want to provide the smoothest gameplay experience to my customers.

author=Irog
Ren'Py also runs on Linux and other platforms !

I guess that means you can download Ren'Py onto a Steam Deck and make a game with it in portable mode?????????????

Close
02/22/2022 06:42 PM
On itch.io there are a lot of visual novels made with Ren'Py that have 3 downloads (Windows, Mac and Linux). The Linux download directly runs on Linux, no need to bother with Steam. I guess Ren'Py can build all 3 download files from any development platform.
kory_toombs

I bought a nice pre-made UI for Ren'Py. It includes a lot of nice features. The support for the engine, the scripts /resources, it just can never be matched.
Irog

Close
02/23/2022 07:11 PM
That's the beauty of Free and Open Source Software (FOSS): no need to reverse engineer the product and take copyright risks so you can expect a lot of plugins! FOSS also enable the community to submit bug fixes, thus improving the software reliability.
Pages: 1