Essentially, this is a Ring Menu for people who are better at artwork than managing variables.

This template was basically imported from Oracle of Tao as I made it, so it has roughly 20x the common events and loads more variables around than needed. It's kinda because of this that I decided to try something different, making this event without any variables (aside from Key Press, which I resumed), and with only two switches (RingMenu and Menu Wait).

That's right. It took exactly ZERO variables to make this (aside from like key press to control buttons, maybe). And the only reason it took so many common events was because I wanted to clearly manage the processes.

The template, because it has garbage cruft from my game, may need explaining on how it works, so here goes.
-I made a KeyPress event, which in turn has a lot of extra stuff. But the main thing is that it shuts off the menu, and opens a custom one, then uses the MenuWait switch to keep the menu from cycling (a glitch that commonly happens to me because menu and cancel are the same button).
-Next, I started with a simple menu based on the hero MainMenu being named MainMenu, and hit enter after making a label and a picture.
-Then I made a KeyPress submenu, changing the processes of pushing left and right (it basically renames MainMenu to whatever the current selection is).
-Then KeyPress tests if the enter button is pressed, and checks it against the name. That is, MainMenu does main menu processes!
-I decided against rotating the ring itself, instead shifting the arrows, because the latter would involve animation to a point I wasn't comfortable with using this method. However, if you want to, it simply involves swapping out the top icon for the next one and making in-between animations.

This should be enough to get people started on their Secret of Mana games! 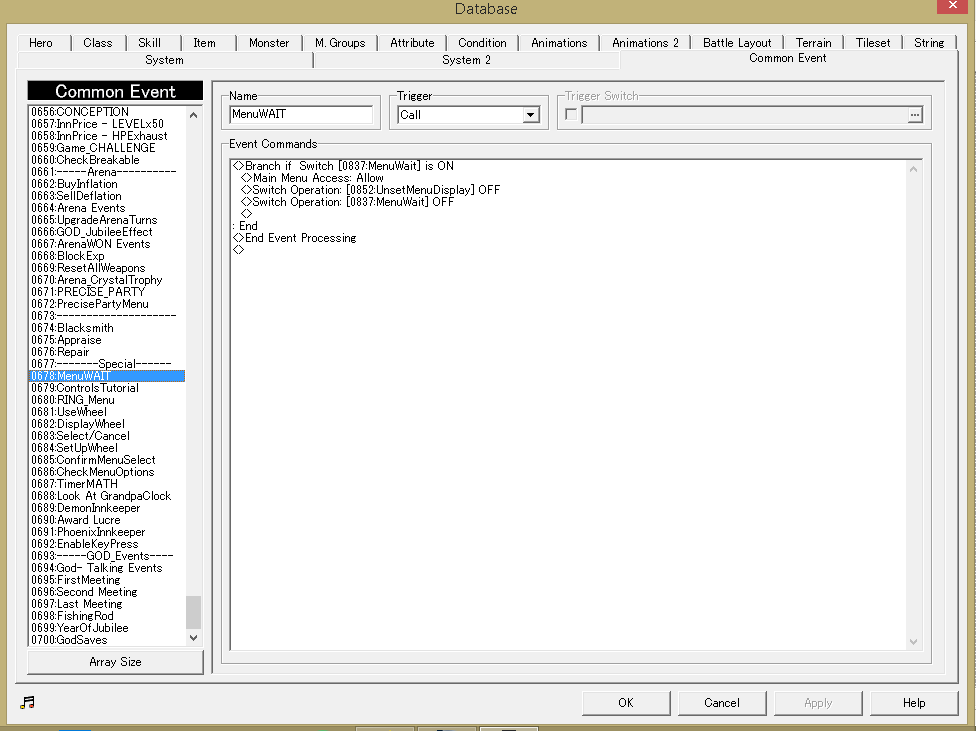 1. You need this to jam the menu so the cursor moves instead of the character, basically you're hijacking Key Press events.
2. Make pictures for the wheel (not pictured here). You can checking for certain switches, or have one default picture. So you have three parts: icons, cursor, and the selection display. 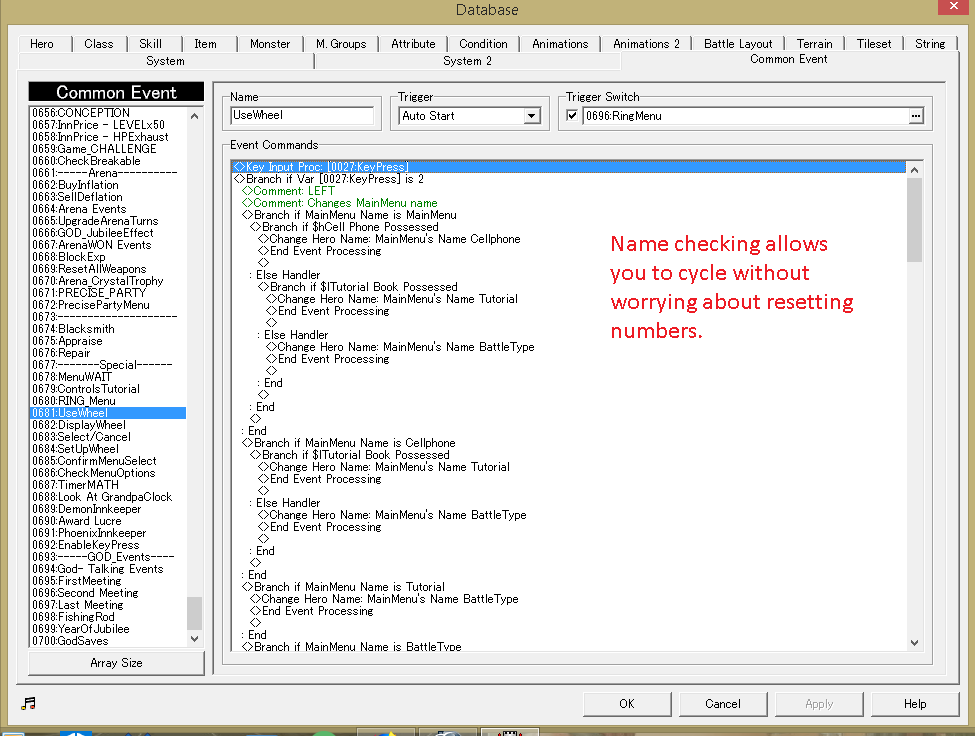 3. Change the selection of the wheel. I'm using names rather than conventional variables, because it allows them to change in a cycle rather than going 0-6 then back to 0. Also, this is not a rotating wheel, though if you understand this better, you can have the wheel rotate instead of the cursor. 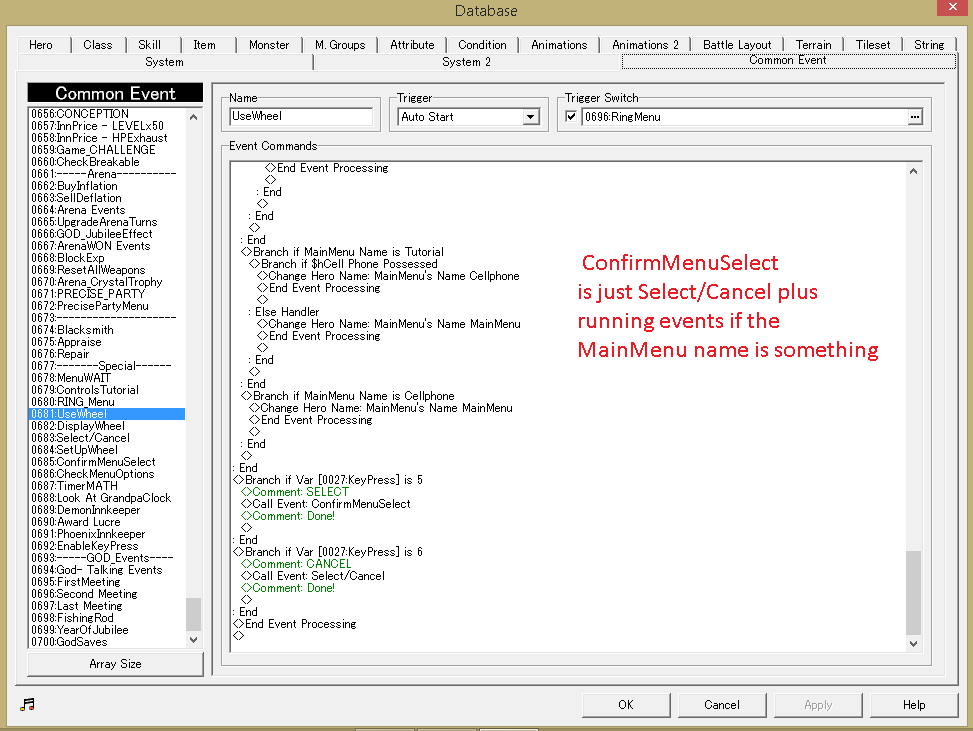 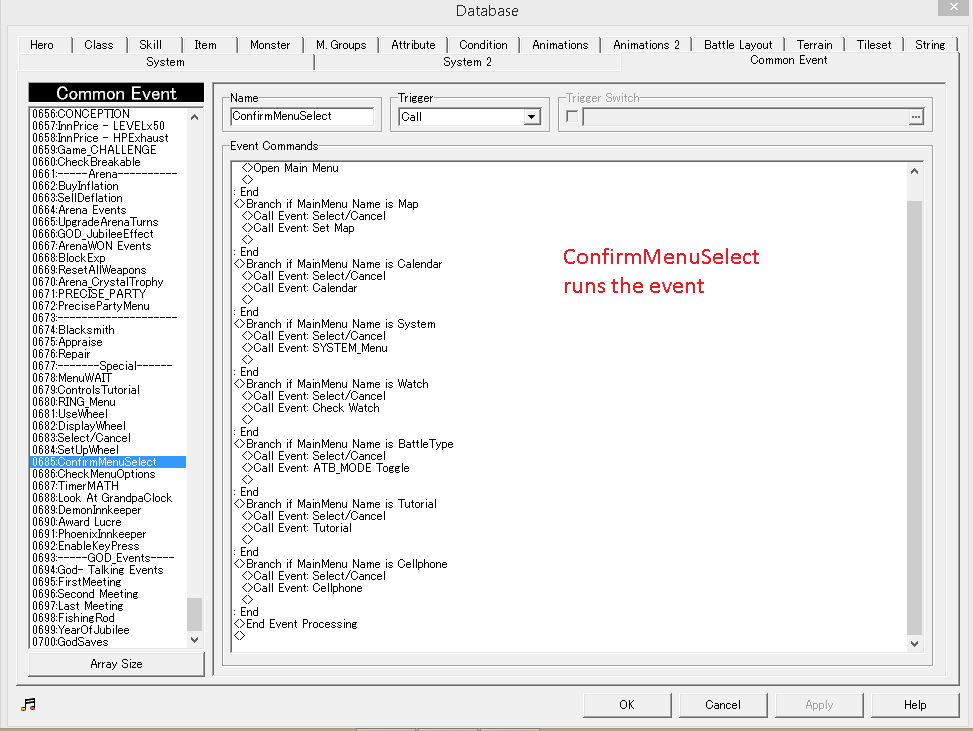 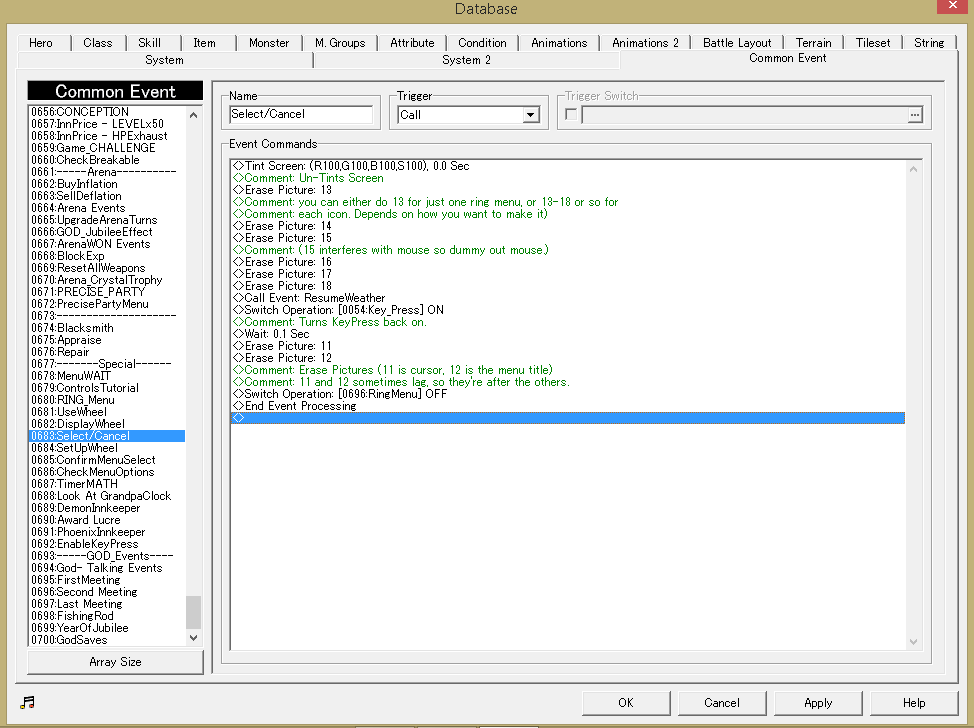 5. Voila! Screen tinted grey when calling ring menu. And collapses when it's not there. 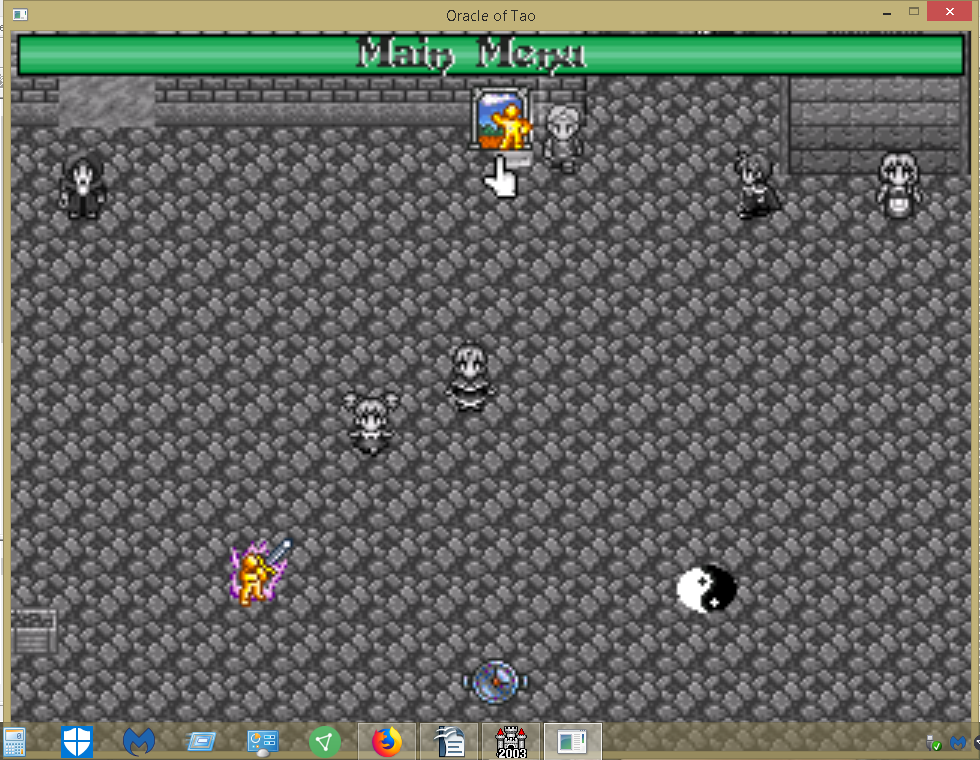 This menu is condition-based, so you get more icons as the story progresses. Right now, there is main menu (currently selected), system menu (the Yin Yang, selected by pressing right I think), Clock (I currently have a single use Old Clock, so this disappears after one use! But you can buy a decent watch), and ATB mode (since I have a custom turn-based system, this makes sense). As you get a map, calendar, and cellphone, those options appear too. 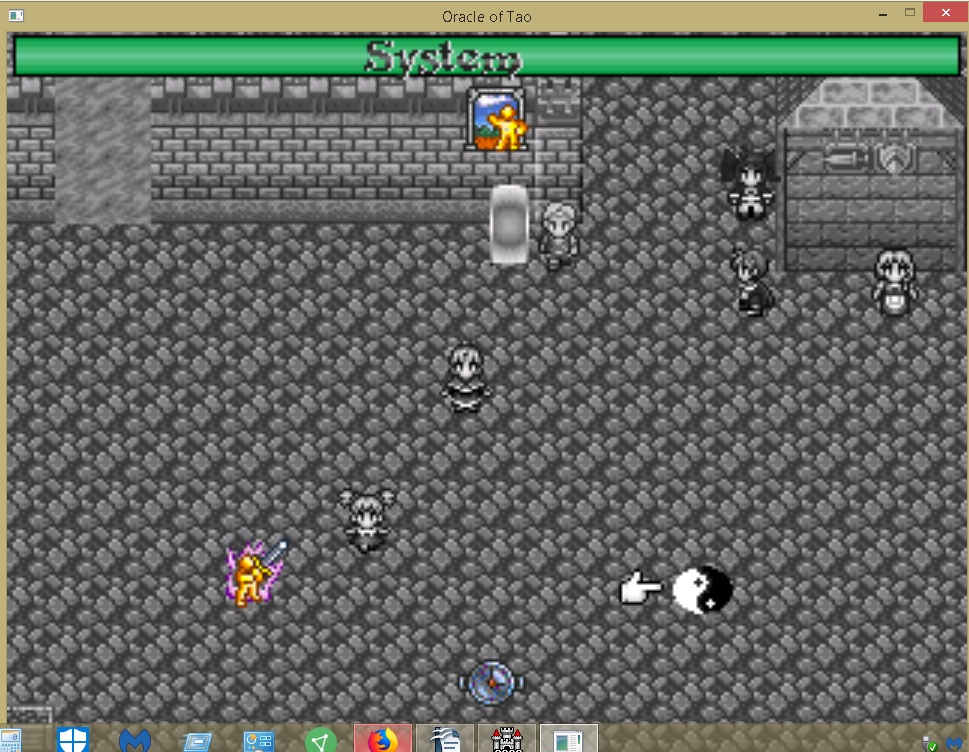 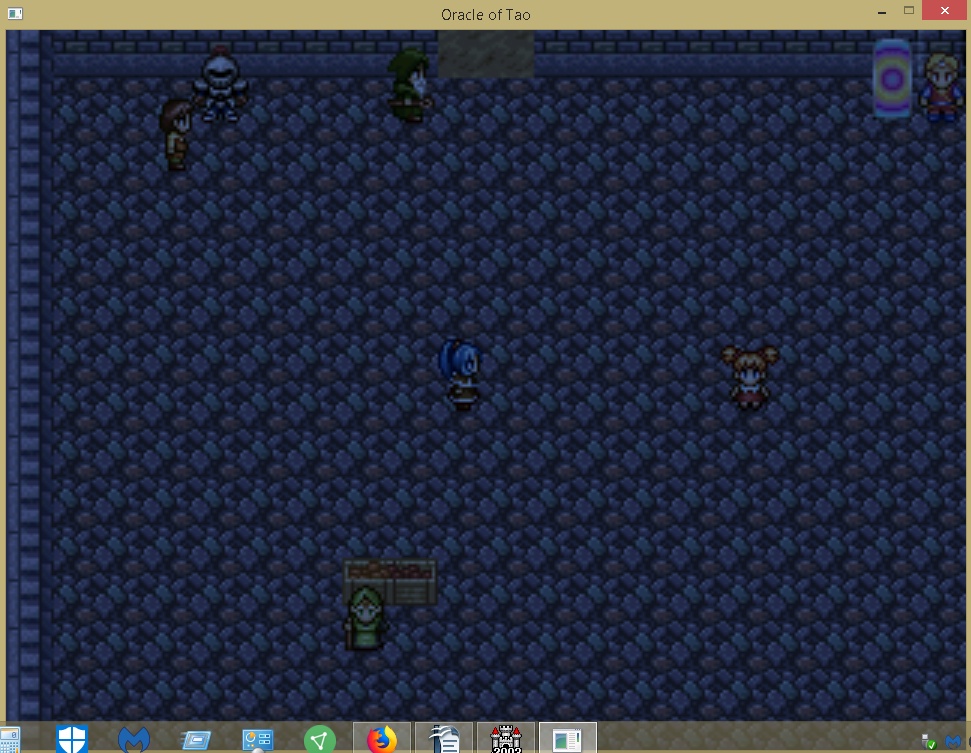 Then the Ring Menu collapses.