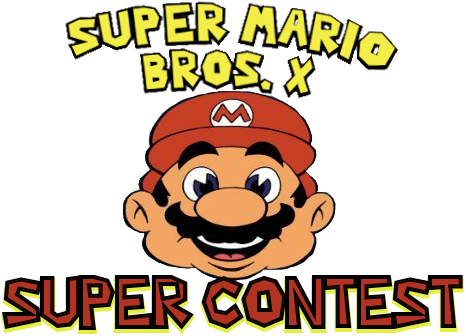 Hey, Pisanos! In honor of RMN’s official Mario Month, We're bringing back the Mario-making spirit in the form of a level-design contest in the Super Mario Bros. X engine!

… Come again? You heard me right! We’re not really making a collaborative game this time around. This is a CONTEST to see who can make the best level in SMBX! The winner will receive lucrative prize of ANY GAME OF YOUR CHOICE ON STEAM UNDER $20.00, in addition to a nice achievement and makerscore!

Regardless of placement, each level submitted will be compiled into a custom-made SMBX game where everyone will be able to play and view feedback from our four judges: Isrieri, Deckiller, Halibabica, and your host, Ratty 524!

OKIE-DOKIE! WHAT ARE THE DETAILS?
As mentioned before, this is a CONTEST to see who can create the best mario-focused level, using any style of your choice. In light of this, we do have a few ground rules:

POINTS, EH!? WHAT-A-POINTS?
Glad you asked! We judges will use a 1-10 rating system for judging each level in this contest; a score of "1" in any category will be the lowest, representing an area your level functions poorly in, and "10" is the highest, showing an area the level does well in. Here is the criteria you should be considering for your submission, It’ll also be the criteria we judges will use to rate your levels:

The final score of a level will be averaged between judges, with your final score being a total of the ratings in each category. The level with the highest total, obviously, will win. Aim for 10/10 levels in all categories, folks!

HELPFUL LINKS
Not sure how to use SMBX or need help in making a quality level? Check out some of these plumber-approved tutorials and design articles to help you out!

RMN's Super Mario Bros. X Tutorial Portal - Contains many helpful articles that cover both working with the engine itself and performing some nifty tricks like making the Ball n' Chain obstacle from Super Mario World.

Anatomy of Super Mario Bros part 10, part 11, part 12, so on..., and so forth... - This is an comprehensive series of articles that dissects every level from Super Mario Bros, revealing a lot of deliberate and thoughtful design choices the game designers made at the time. I highly recommend you check these out if you want to create some really well-designed levels.

SMBX Graphics Portal - Check out these featured graphic packs on the SMBX forums for your custom asset needs!

WHAT ARE YOU WAITING FOR

Close
04/08/2016 02:39 AM
You realize that event pages are publicly available as long as you have the link and when you post it shows up in Latest Posts right? With a link?
Ratty524

I was spending time whipping up some assets to use for the banner and everything. That details section needs to be kind of fixed, but that's kind of the extent of my CSS knowledge. :x

THIS EVENT IS NOW LIVE!


Make it good within that time! ;)
TehGuy

Make it good within that time! ;)

Considering I also have to read all the tuts on the engine?

Challenge accepted; I will be winrar
NeverSilent

Close
04/08/2016 02:42 PM
I like the idea of this event. I've never used SMBX before, but after seeing this page, I decided to just try it out for a bit, and it doesn't seem that hard. Sure, I probably won't win a prize with anything I make, but I think I'll just participate for the fun of it.
charblar


She ain't THAT valuable! >_>
Punkitt

That is to say I will make a level that I should have made for CMS II a long time ago for this event, and then put it in the game afterwards
CashmereCat

I just had trouble making anything work well in SMBX.
Ratty524

author=Cecil_Beoulve
If this was somehoe with Super Mario Maker, I would a billion times over be on board.

I just had trouble making anything work well in SMBX.


Yeah, the program does have its moments of being unruly and limited in certain areas. It's still fun to work with in some aspect, though, even though Mario Maker offers a bit more (though It's hard to give your levels a unique identity with Mario Maker).
Pages: first 1234567891011 next last