Geebone the Stormshadow
Show
Name: Geebone
Gender: Male
Age: 22
Description: Geebone is part of a secret clan intent on keeping balance to the realm. Trained since a young age as one of the clan's elite assassins, Geebone is able to withstand a shelacking and still keep coming for the kill. A stormshadow is relentless.

Other: Even though he has been indoctrinated since he was a boy to follow the will of the clan, Geebone has developed a taste for power. He might have fallen prey to the lure of the dark power...

Focus: area damage over time (slip damage, storm and dark), Sneak attacks/stealth (dark), defense buffs (or enemy blindness debuffs (dark!)) and/or life drain (whatever works better for you) - the idea being that the Stormshadow will start with that quick damaging hit, then let his damage-over-time skills destroy the group while he absorbs/avoids damage

Victory "Another successful hunt." | "It was just a matter of time..."
-Item drop screen "This could prove useful."
-Leveling up "I can feel the power flow through me." | "Embrace the darkness!"
-Opening a chest "Excellent."
-Starting battle (high HP) "I will not stop until you are dead." | "Your light ends here."
-Starting battle (low HP) "A Stormshadow is relentless!"
-Staying at an inn "The night is lovely, dark and deep."
-Before final battle with the Wyrm Wizard "Your power will be mine!"
E:
If double-bladed swordstaffs are an option, I would like that for him as his primary weapon!
UPRC

Show
Name: Ondres
Gender: Male
Age: 2374
Description: Head trauma from his youth combined with senility have made this gentle Elf a truly unpredictable adversary.
Other: Brain damaged and senile, a winning combination.

Victory: "Yes dear, I'll have another tea."
Item Drop: "Dang children leaving their toys on my yard!"
Level Up: "Let me tell you a story! When I was a little boy..."
Battle Start (High HP): "Oh, you're just in time for supper!"
Battle Start (Low HP): "My old bones feel like jelly."
Inn: "Hold on! This isn't my bedroom! Where am I?"
Before Final Battle: "Did you know? I'm a very good flute player."
unity

Right now I'm filling out the status menu, then setting up the skills so I can wrap up the Class tab and start making dungeons!

I'm thinking that you might not start with EVERYBODY, but a handful, and the first few required dungeons will chuck 'em all at you (nobody is optional since I don't want to spend my forty-eight hours with conditional branches; an expanded post-DO SOMETHING event version can totally have some characters be optional). It'll be kind of hilariously fast-paced, but it allows for more quick dialogue, it's not like this game is a totally serious endeavor XD
unity

Close
01/14/2014 04:06 PM
Damn, you're a trooper. I'm really excited about all this. I'm really tempted to throw another character in, but we've got so many already and I've already made two.

This will be one of those games I'll have to play multiple times just to have fun with all the crazy characters :D
Liberty Kestrel the Ill Omen
Show
Name: Kestrel (Oliver)
Gender: Male
Age: 29
Description: Expelled from the Highest and Moste Nobel Skool of Strategising after a rather unfortunate prank on the son of the local Justicar of the Peace went quite horribly wrong, Kestrel decided he had learned enough to open his own business as a strategist. Unfortunately his abilities were... not quite up to scratch and he lost the battle that his sole client had hired him for. Rather horribly, actually. With no casualties for the enemy. And 78% mortality rate for his client.
Other: His real name is Oliver but after said defeat he is known as Kestral - named so after the bird that bodes ill for any field of battle.

- Victory - "Just as planned." / "Good thing I was here!" / "They couldn't fathom my brilliant strategy!"
- Item Drop - "Is there anything we can use in the next battle?" / "Let me see if these will be useful to my plans."
- Level Up - "Ah! I just thought of a new plan!" / "My brilliance grows brighter!" / "If they could see me now..."
- Chest Open - "I detected no loss to taking this with us. It may just turn the tide of battle!"
- Full HP Battle - "Prepare yourselves! With my incredible planning, even these brutish companions of mine can slay creatures such as yourselves!"
- Low HP Battle - "If only you'd only paid heed to my stratagems... Then I wouldn't be in this ignominious state."
- Inn - "We should rest up for the battle. Let's go over our plans!" / "I shall study into the night to find the perfect plan for the next battle."
- Wyrm Battle - "This... Finally the chance to redeem myself and take back my name. After this battle I shall eschew the unfortunate title of Kestral and shall once more be known by my true name! I will become OLIVER!"
- Death - "No, wait... This... This isn't what I planned..." / "Why...? How did I misjudge this so badly?" / "Not... quite what I... expec-"
UPRC

Close
01/14/2014 04:26 PM
This is actually a really cool idea as a whole, and I'm glad Craze is doing it! We should do community things like this in the future where the community has input on the game as a whole without actually getting it in their hands to work on (like a chain game). Something like this, but with input on locations, the world, monsters, etc.
unity

UPRC
This is actually a really cool idea as a whole, and I'm glad Craze is doing it! We should do community things like this in the future where the community has input on the game as a whole without actually getting it in their hands to work on (like a chain game). Something like this, but with input on locations, the world, monsters, etc.

If you want, feel free to suggest locations. As I said last night, I plan on having quite a lot (despite the time restraints) since their setup is fairly simple.

I'm more than willing to get a lot more input for a rework of the game after the event. This event is just sort of a goofy way of starting something, and seeing if it'll work. (And even if the game doesn't get to the final boss over the next day and a half, I'll still release what's done for the DO SOMETHING event.)

Keep the characters coming, and any other ideas! There are few built into bios, which is handy, but more are welcome. The country is going to conveniently run the whole gambit of biomes (desert, grassy, wasteland, arctic, etc.), so if the RTP can map it, it's probably workable ;V

edit: oh yeah and it -NOT- being a chain game is 100% intentional. Having a very small crew doing the game proper will make it a lot more cohesive, imo.
kentona

author=UPRC
This is actually a really cool idea as a whole, and I'm glad Craze is doing it! We should do community things like this in the future where the community has input on the game as a whole without actually getting it in their hands to work on (like a chain game). Something like this, but with input on locations, the world, monsters, etc.


I've tried this. Twice.. Sadly, I couldn't complete it (or even really get them out of the hangar, let alone off the ground). I did manage to salvage some of the ideas for a couple of my own games, though.

But yes, that would be fun to do!
Desertopa

Close
01/14/2014 05:01 PM
The way I would probably try pulling that off is to set up a basic framework, and request for people to PM submissions for their contributions to the work, and then select some predetermined number of people to stay on the project.
(I'd recommend keeping the submissions private, because it preserves some element of secrecy about what's going into the game, and because I think the people whose submissions don't get accepted might find it easier to deal with if they don't know what was picked over them.)

Projects which takes input from everyone who offers it will tend to end up... lacking in cohesion, at the very least. It's probably not a big deal for a two day game, but a longer game probably needs a more unified direction.
Liberty Not sure if the "i can equip these" icons will appear on the main menu or not.
Sooz 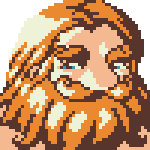 If anybody knows of/wants to make a windowskin for the game, that'd be lovely. And feel free to add in more characters and/or ideas for places to visit. There's no way in hell I'll have a quality finished project done in <1.5 days, but I'm more than willing to keep working on this. (And, like I said earlier, I'll release all that IS done once DO SOMETHING is over.) What that means is that there's room for input!
UPRC

author=unity
Haha, awesome, you tied in your character's backstory with mine :D

I don't know. It seemed more in the community spirit to build off each other.
Arandomgamemaker
1629

I've got to wonder what this Wyrm Wizard did to incur the wrath of so many people that vary so much in their walks of life. He must have magicked all their melons into monsters or something. Maybe all melons are just the magical ingredient needed to birth horrifying demons from the pits of hell. Because they're mostly water. Makes perfect sense. To a Wyrm Wizard!

I have to go back and read all these bios when I find more time. I only just stumbled on this tonight.
Pages: first prev 123456 next last
Forums :: Game Design & Development
Back to Top