Close
02/14/2015 04:05 AM
From experience, comics are a shitload of work but will absolutely improve your drawing if you're serious, because you HAVE to draw freakin everything.

You did a great job with the color in this! Would you be interested in getting some critique on your comicking?
Perihelion

Two big sticking points on my first readthru were both related to not realising there's a second character.

First point: a shot establishing the two figures in the same space is absolutely necessary so your audience can instantly tell who's where in relation to who, and what's going on. (I'd put it either in the first panel or, if you wanted to keep focusing on the narrator, the fourth; show the narrator approaching or reacting to Rhidi.)

Second point: You should push the designs some more so that they're more obviously different. Right now, the only difference is some superficial costume variation, which doesn't jump out. Unless you're intending the characters to strongly resemble one another in story, you'll probably want to vary the silhouettes a lot more- make it so that a reader could tell them apart if they were backlit. Here's a pretty good example of what I'm talking about.

It could be something as simple as giving one a more widely flared hemline and the other broader shoulders, so the former has a triangular sillo and the other a rectangular one. (I'd also suggest adding some other details, like a more extreme variation in hood shape and cape outline.)

You have a good eye for using angles to enhance the mood, and a pretty good sense of rhythm. These are talents that are super-important for making a decent comic, so you're going good there! Keep it up! :D
Perihelion

Close
02/14/2015 04:45 AM
Thanks for the feedback! I'll see about putting both characters into an earlier panel and varying the silhouettes. I had a hard time figuring out how to do it when I was working on the designs, but I'll revisit it.
Sooz

Close
02/14/2015 04:57 AM
It may help to convert the original designs to sillos and just scribble on them until they look different, then fill in with something new. 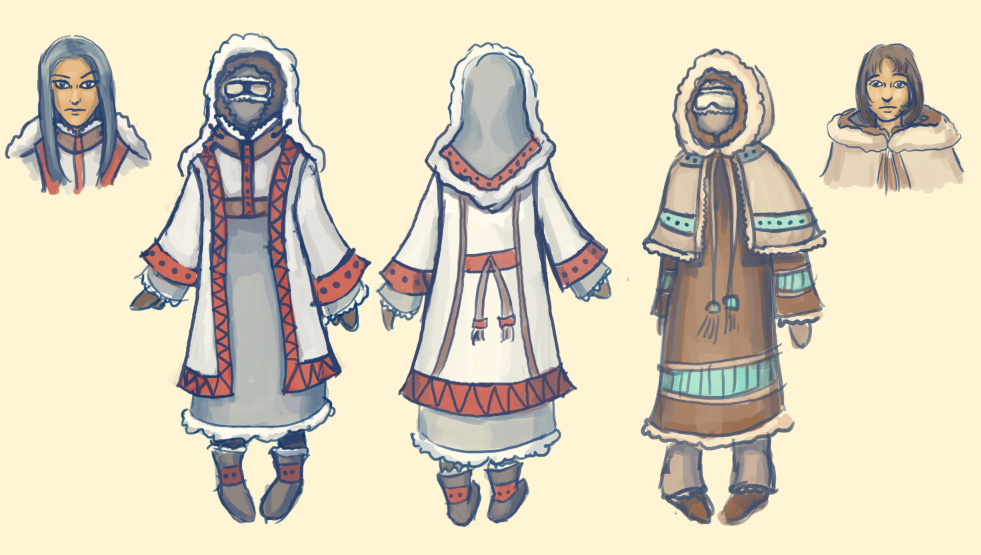 I took a stab at it, but the silhouettes are still pretty similar. I'm having a hard time figuring out ways to differentiate them when they're both swaddled head to foot in clothes. :I Maybe I can make the flare of the overcoat and capelet bigger or something, but that might look silly.
Sooz

I also made the fur trim different types, so the texture can be easily distinguished.

Whenever I'm doing costume design I like to browse a lot of plates of historical and folk costume from appropriate regions (and time periods) for inspo; this collection here is probably one I've used the most. (At least, of the stuff online. I may also have an eensy vice of collecting books of various pretty pretty dressup pictures.)

The idea isn't so much to be slavishly devoted to accuracy as to get an idea of how different peoples solved their environmental problems and the methods they developed to show off their swag. :3

Also amusingly I have so many tabs open that the thread title is now "Peri's ass" :V
Perihelion

Close
02/15/2015 11:19 PM
Yeah, I looked up a bunch of images of traditional Arctic clothing when I was designing them. Also, thanks for the sketch! That's very helpful. I tried experimenting with the triangular shape, but ultimately I couldn't make it not look masculine, so I tried an egg shape instead. 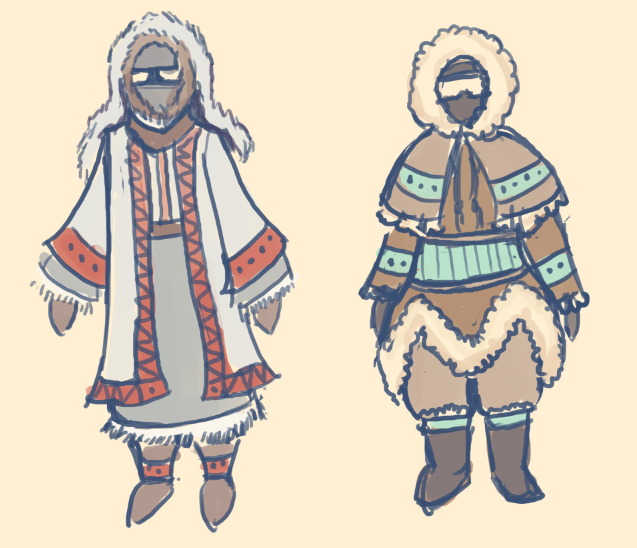 Is this any better? I think I'm gonna move the waist up on the right one...
Sooz

I'm currently working on this character model again. I finished the boots, but I'm kinda ambivalent about them: 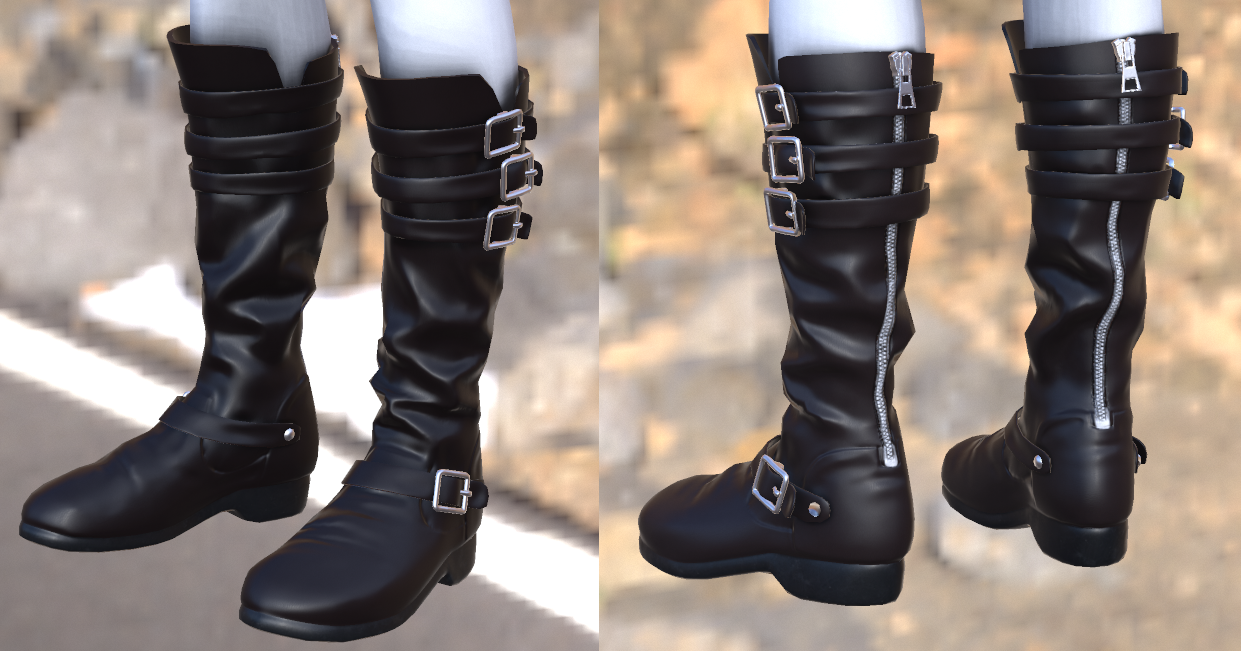 I might make the zippers a darker metal. I put them on the back because I was trying to add visual interest, but now I dunno how I feel about it.
Sooz 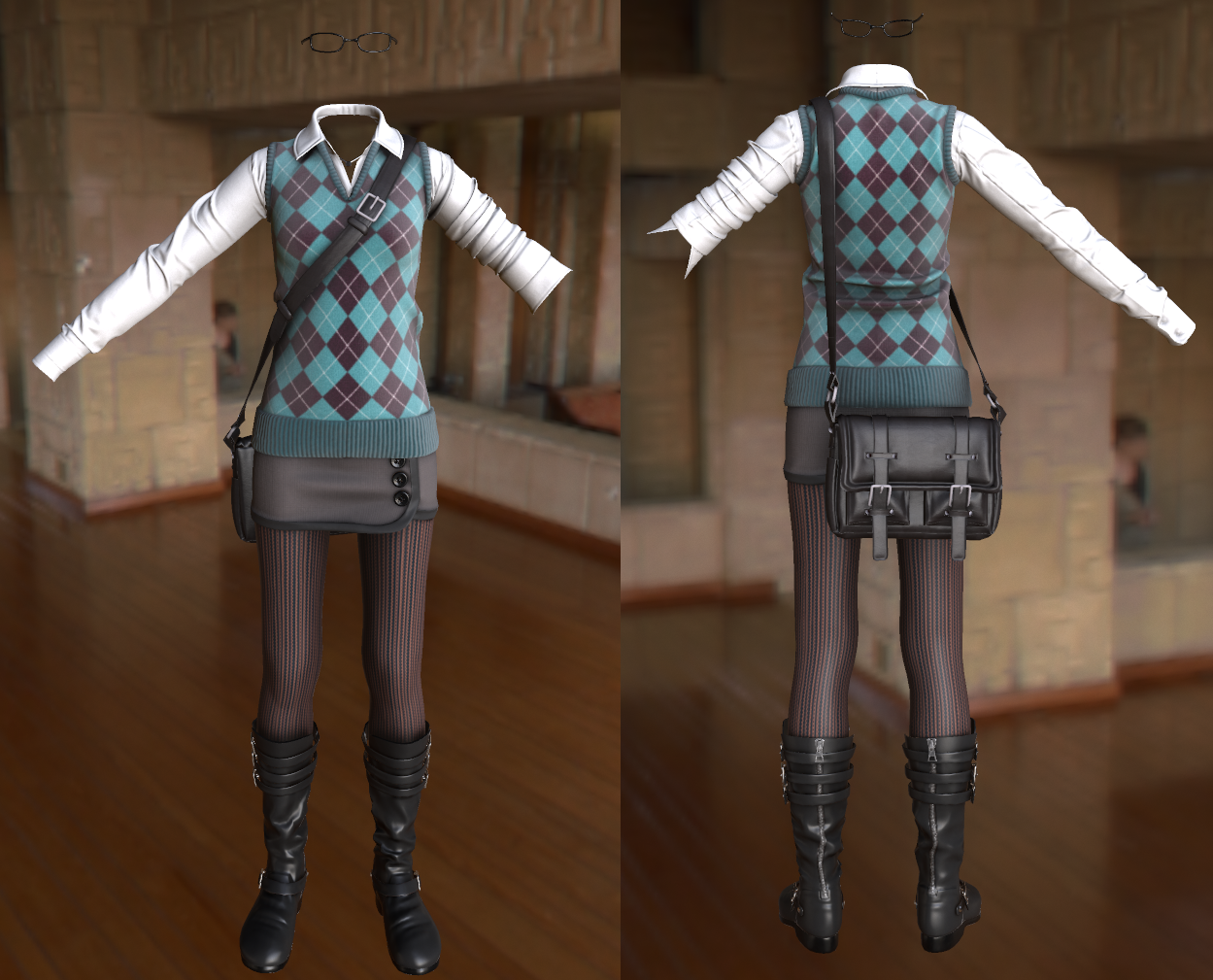 I think the bag or skirt needs to be a different color, but I'm not sure what I'm doing with it yet. I might look at it again after I texture her skin and hair. The shirt material also still looks pretty bad, so I need to mess with it some more. I also wanna do some texturing on the metal's roughness map to make it look more beat up and smudged.

I spent a long time on the wool material, but I think something about it is still off. I'm not sure what to do to push it to the next level, though. :[ Using a microfiber diffusion shader to add fresnel (the light around the edges of the sweater) helped a lot, but something is still missing.

Note my clever use of UV distortion to get the argyle pattern and tights to follow the form of her body correctly! I constructed the clothes so the UVs would be rectangular. This is what the albedo map for the clothes looks like: 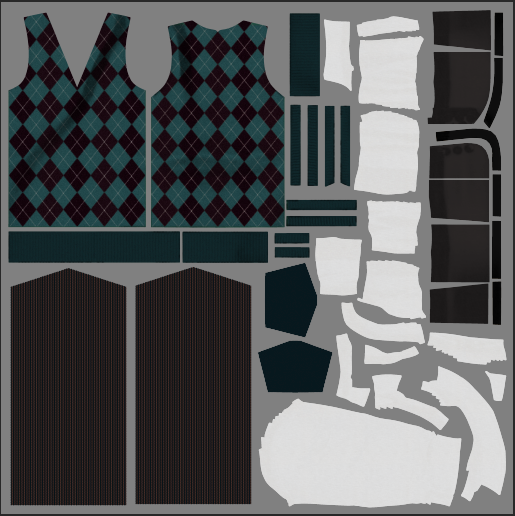 Close
03/07/2015 12:09 AM
If you're still wondering about it, I think a dark blue would be lovely for the skirt. also i continue to be impressed by your modeling, it is v nice.
Perihelion

Anyway, I've been working on skin and eye materials: 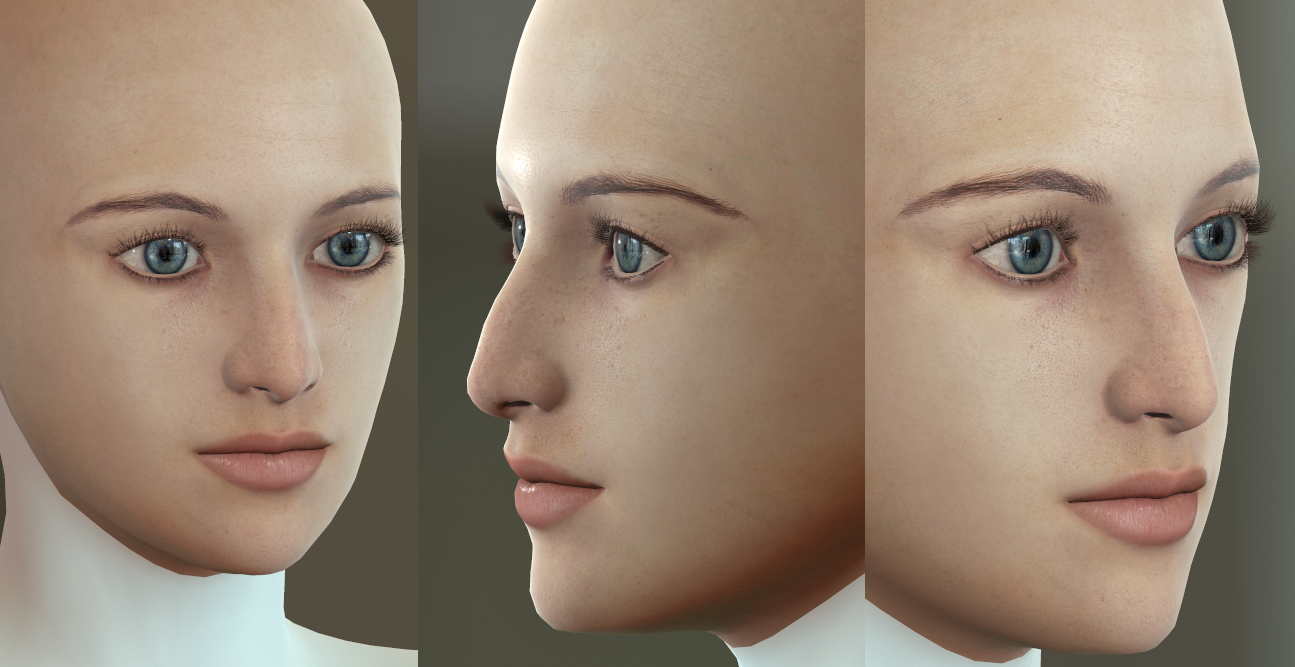 Close
03/21/2015 02:06 AM
Doing hair now. Started with some FiberMesh hair in ZBrush, which is high-poly, but I think I can create a low-poly mesh from it with shenanigans. 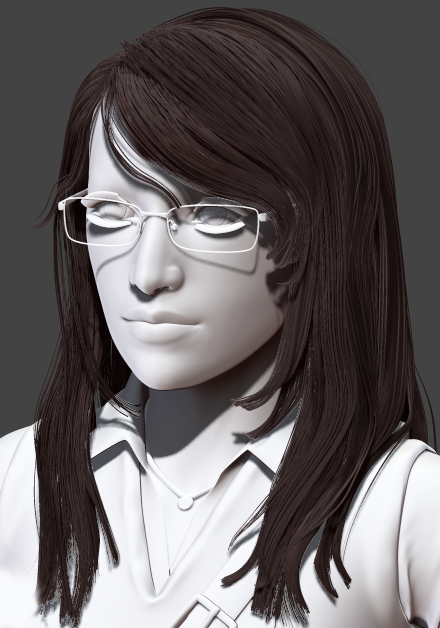 This is just a default material in ZBrush. I'm gonna make one that will hopefully be better.
Perihelion

Close
03/27/2015 06:18 PM
I'm taking a break from modeling at the moment to work on some dungeon concepts for my game. These are pretty quick and sloppy, but I'm trying to focus more on light/space/mood than details. 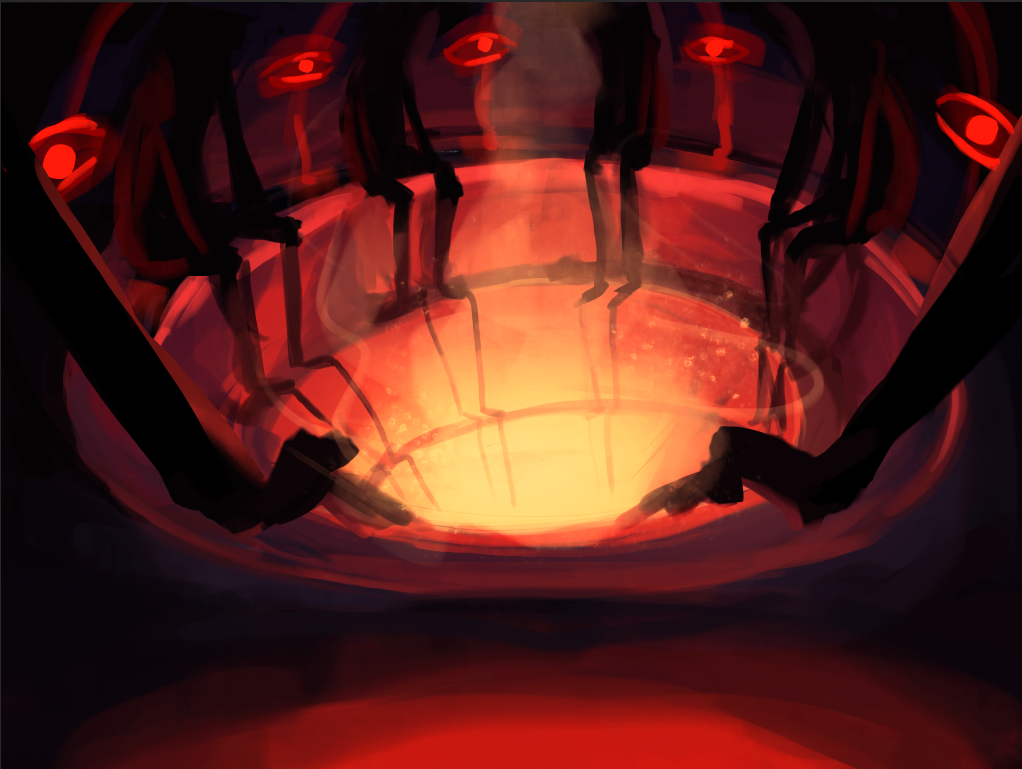 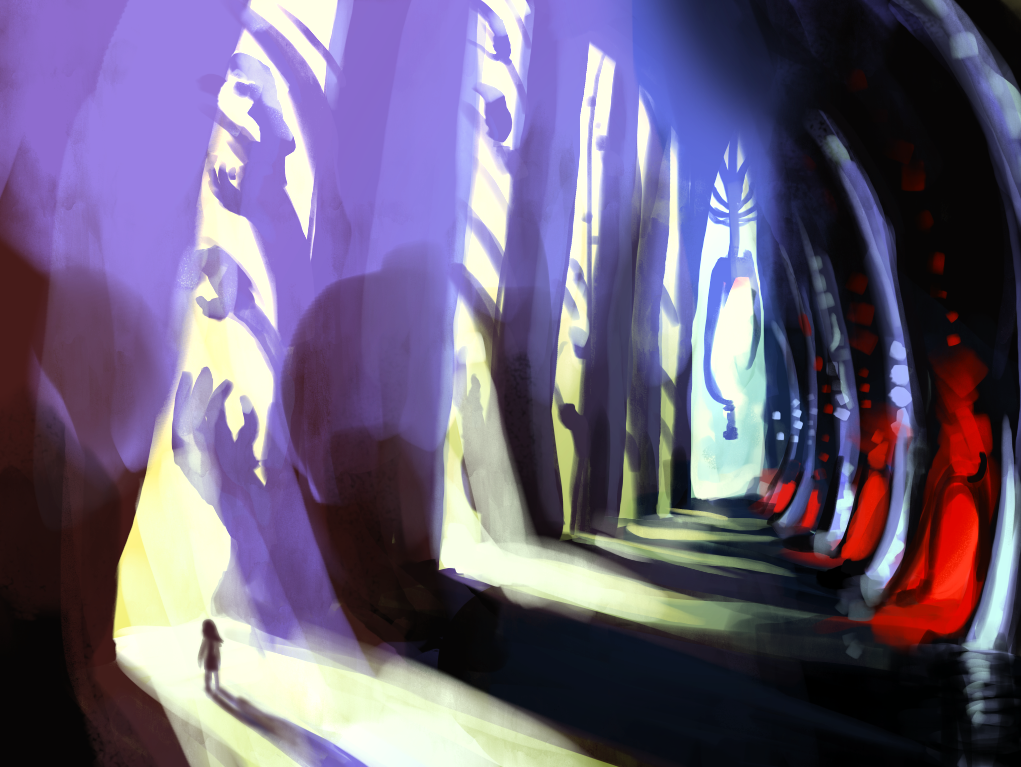 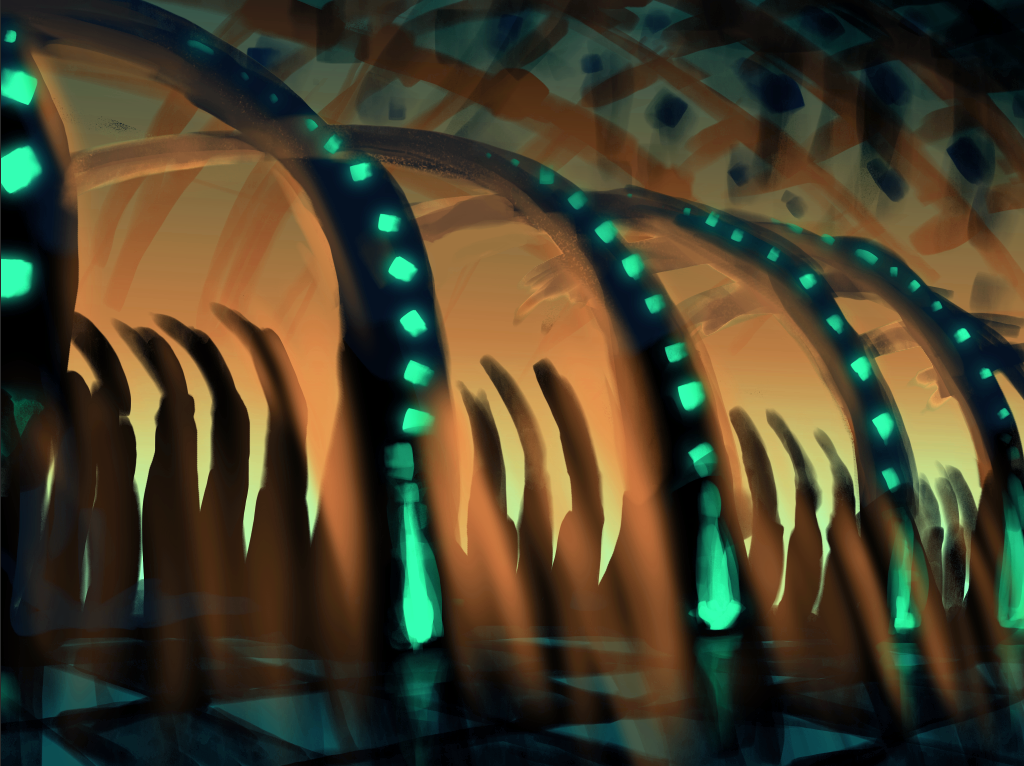