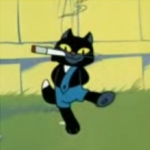 I'll go first by saying that I used to think that I was unworthy of being a member on RMN. I pretty much acted like RMN was some Godly realm.
turkeyDawg

Close
07/30/2014 10:19 PM
When I first joined this forum, it was purely to attempt making music for someone else. My first try was with UPRC for Blackmoon Prophecy II, but I was too slow and he actually completely forgot that I was working on it and had someone else get it. Later I would try with Oddysea Dungeon, and that went a bit better. I got the title and the town theme done, but after struggling with the battle theme for 3 months straight, my brain officially broke and I quit back in June. It turns out I don't quite have the confidence to work for other people, probably more to do with my silly OCD and pointless hyper-self-critical paranoia than my actual abilities.

So now I'm pretty much just... here. I mostly play platformers, shooters, and beat-em-ups/fighting games. I haven't seriously played an RPG in several years. I've downloaded a few games off this site, but I've barely played any of them. Also, while I have what feels like at least 20 different game ideas I'd like to do, only about 3 of them are RPGs.
Roden

Okay, that's obvious to anyone who was here back in the day. I used to be the worst vaporware offender out there- I think I "made" about 20 games during my old tenure, and that's fucking low-balling it. I was a pretty big snot back then too, because I was a lot younger and not experienced with the world in any way.

Nowadays I actually am putting thought and consideration into my work- because I intend to make a living off of it in a few years time, whenever that decides to pan out for me.
TheNecromancer

I couldn't remember much of the specifics, but at one point a few years back when I was 10, I tried to join this elitist gaming site. I wasn't rm-ing back then. I was making shoot-em-ups and platformers. Well, the 'higher ups' were the worst kind of people I have ever met, and ever will. They literally step on newcomers for every single action they make that fails to meet their expectations. I had to bear with it for half a year, before they finally broke me. Because of them, I quit game making. The insults and degrading comments had torn at me visciously for long enough.
Six years later; for some reason, I went back to game making. Six years later; the fear was still there, but I can't stop this passion. Six years later, I found RMN.

Sorry if I made this topic gloomy. I just wanted to share, that's all.

Don't we all
kentona

Close
08/01/2014 11:21 AM
I have gone through 2 separate personal crisis on here. The first when I had a mental breakdown, and the second after my house burned down. All documented into RMN infamy.

Thank god those days are over.
Arandomgamemaker
1629