"Americana Dawn is a role playing game which explores over two centuries of early American history using a new tradition of folklore and tall tales inspired by Genso Suikoden and Mark Twain. Throughout its story, we follow Foster, the spirit of the sea, a gentle and innocent being who arrives in America with no apparent heritage or home. Lost to the wilderness of Shenandoah Valley, he lives in complete isolation for a hundred years until he is found and recruited in the provincial militia. Thus begins his strange journey, spanning across three wars and the entire eastern seaboard of North America: from the French and Indian War to the American Revolution, from the colony of Georgia to Quebec City.

Foster witnesses once loyal English become American rebels. He fights against dear friends turned foe, watch mortal companions blossom and wither, bears witness to the chain of events that would create the United States, and is left with revelations both inspiring and woeful.

This is not a story about a man who changes the world, but a world that changes a man." 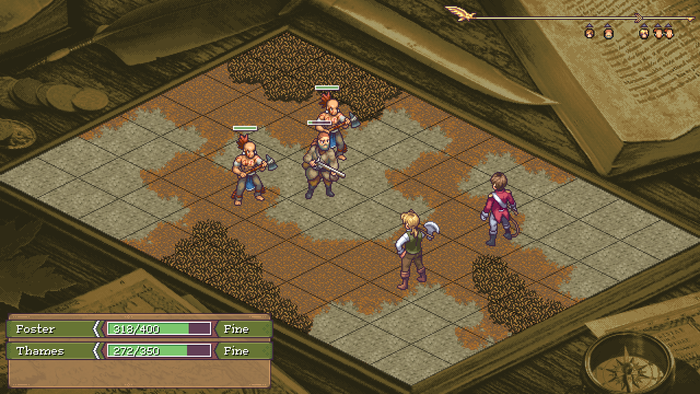 You know, this is a project of YDS, a cool person who used to be an active member of the RMN community. I think this project is a great example of what people who start off with Rpg Maker, for example, may aspire towards to and when successful, will inspire the whole community.

Check out more information on their kickstarter page! As an j-rpg enthusiast and a long time member of RM community myself, I'm all for everyone showing this the best of support they can!

Heck, this should even be on the front page.
suzy_cheesedreams which is COOL, because it's a very good approach!
I'm looking forward to this. If I manage to setup my paypal and kickstarter accounts, I'll back it for sure! :D
Sailerius

Close
11/27/2014 05:02 PM
Yeah, the stuff Team Cascade/Shmup Crew/Meridian Dance/Whatever is doing now looks fantastic. Makes me feel pretty cool to have once known these guys and worked with them, even if it was a doomed project back when I was a fucking moron.

Also gives me a lot of inspiration in terms of what I could end up doing over the next few years.

author=kentona
Wasn't this already on kickstarter? Can you submit the same project twice?

This is pretty worrying though. I admittedly don't know the whole story about them since I barely follow indie news at all (outside of TiGSource).
Happy

The kickstarter page also mentions that the team was reconstructed. The project seems to have established a much clearer concept since its earlier days, anyway.

The game has been delayed from its original release date perhaps, but calling it a failure is pretty far stretch in my opinion.

Close
11/27/2014 07:05 PM
This seems pretty awesome, not to mention a RPGs that take place in early America are not a common sight, and this was developed by YDS? I'd be sold if I actually had money.
GreatRedSpirit

author=kentona
Wasn't this already on kickstarter? Can you submit the same project twice?

It was! The original kickstarter was for a version made in RPG Maker VX. It made its goal and some over but issues arose beyond what RMVX can do (it's not my place to say so I won't go into details beyond that). Now its on its own engine with a solid team behind it and the original kickstarter incentives are promised to still be met and given. I'm gonna throw some more money into this, I already threw in $20 and helped with scripts on the original project because it looked fantastic and still does.
Liberty

Close
11/27/2014 07:25 PM
It's come a long way from the fangame it used to be. I remember kicking it with YDS over skype, talking about it way back when it was still based around Hetalia. The game itself has been through a lot of revision - started off with Mack graphics, then got a more original-looking set, then an even more original series before becoming this.

Close
11/27/2014 08:40 PM
Awesome! I've been wondering for some time what ever was of this game, but I couldn't remember its name until I saw the title of this thread. I'm glad to see it is still in development and that it has matured so much... Those Suikoden vibes, man! Those Suikoden vibes!!! I can barely believe it! Gosh, I'm so Suikoden-starved these days. Thanks for nothing, Konami! xP

I just wish I had some moneys lying around to throw at this game, regardless of any times it has been funded or not; but alas, I'm poor. =(

Btw, someone should tell YDS to come visit sometime or something, she was cool. =P
GreatRedSpirit

Close
11/27/2014 08:54 PM
You wouldn't have remembered the correct name anyways, the original name was Hetalia - The Long Goodbye. Even the main character's names changed (Foster and Thames), but I don't remember what they were. I think... one was Thomas?

e: Halitali is a dungeon in a video game, Hetalia is the name
Liberty

Close
11/27/2014 09:21 PM
It was the American and British 'spirits', originally. A lot of the ideas about country spirits was taken from the Hetalia series (if you know of it.)

Basically it's a manga/anime that focuses on avatars of the different countries and how they interact during various points of history, often with a highly humourous bent. There's a huge following (or was a few years back) and the game was initially based on the 'ship' between America and England's two avatars. It's original story was very much based on the romantic relationship between the two, but it eventually evolved into being more about the country itself and how it changed the main character (America) as time wore on from being highly optomistic and madly in love with England, to realising the horrors of war and realising the relationship issues they had due to the various obstacles that their countries were putting in their paths.

There were also visits from the other spirits of countries like France, Germany and the like. Initially YDS designed the characters based on the manga/anime itself but over time she started creating her own versions of the characters, redesigning them and finally making her own original characters and story.
SnowOwl

The kickstarter page also mentions that the team was reconstructed. The project seems to have established a much clearer concept since its earlier days, anyway.

The game has been delayed from its original release date perhaps, but calling it a failure is pretty far stretch in my opinion.

Close
11/28/2014 12:16 AM
Well, well, this game has certainly come a long way, though it has gone through so many revamps that I don't quite know what is what already. Still, here's hoping YDS and her team can get a game release for it soon :) It's kind of taking forever.

EDIT: Also, it's great to see that this game will be in Japanese in addition to English :)
Max McGee

Close
11/28/2014 06:09 PM
No interest whatsoever in this particular project--looks extremely nice, obviously, with great production values, but the subject matter's not for me--but it is nice seeing "local boy (girl in this case) done good" type stories about people from the RMN community making it big.
along with, and i sure hope you guys can relate with me here, the bitter bile of jealousy and resentment that I personally have not come this far yet

The fact that there was a Kickstarter of the same project that failed to materialize into an actual game seems like a huge obstacle to overcome--certainly it would be a huge red flag for me personally even if I was interested in backing the project--but they seem to be doing fine in spite of this. Americana Dawn must have undergone an insane amount of changes in the process of going from being a $2,000 game to being a $70,000 game!

Eh, maybe I should back it anyway as a show of good faith as I've known YDS since back in the days of Ghostlight.

Watching the video, I'm curious what engine this is being developed in. It still looks a lot like an RPGMaker game, albeit a super slick one. EDIT: Apparently, it's a custom engine!

EDIT: Holy shitfucks! You guys, how has no one commented on the fact that SovanJedi, SOVAN FUCKING JEDI, is on this team?

Or am I just too old.
Giznads

Close
11/28/2014 11:53 PM
I personally know a few of the folks involved in this. I understand that this wouldn't matter much to investors, but there were some very solid reasons why this went off the radar and back up.

With that being said, this is shaping up to be pretty great.
Shinan

Close
11/29/2014 08:22 AM
I remember making fun of this game on IRC when YDS talked abou tit. Though it looked pretty neat. I probably won't support the kickstarter though. It's not my kind of game. But when it comes out I'll give it a look, depending on what reviews say (and depending on any seasonal sales of course :)
Housekeeping

Close
11/29/2014 06:19 PM
I wonder if this sort of game would be cooler for markets outside of the U.S. I think most Americans are familiar enough with American history (though obviously this game's taking some pretty big liberties) to not be as intrigued by it, and most people find our own history to be pretty boring since we experience it through the classroom for so many years (plus our history is relatively new which makes it lose a lot of the mythical intrigue of older cultures). I'm wondering if there's more of a novelty factor overseas that would make this seem more appealing.

Still, this looks fucking gorgeous--very reminiscent of the early Suikoden games (but with sharper graphics). Could be enough to make it successful. The kickstarter seems to be doing well.
Pages: first 123456 next last
Forums :: Videogames
Back to Top