author=Garbamesh
A little running around the Bug Kingdom town and canyon dungeon. I know I need more stuff in the canyon to break up the monotony..was mostly trying to show the town with some NPCs.

@Momeka - You are a machine! Everything looks super polished and far far away from being recognized as rm2k3. (it is still 2k3 right?)

This is looking amazing. I can see navigation getting a bit hectic in town not knowing exactly what can and cant be jumped on but I also don't see around it. Love the visuals so much, brings a tear to my eye.
zDS

Close
09/11/2018 04:09 AM
Kingdoms of the Dump literally looks too good. The mapping is nothing short of masterful. I think the canyon is STILL mindblowingly beautiful and creative.
StormCrow

Close
09/11/2018 07:01 PM
Reposting my RTP trash because they got disappeared like two posts after I posted them. Embarrassing as they may be I gotta get over my fear of the screenshot thread. 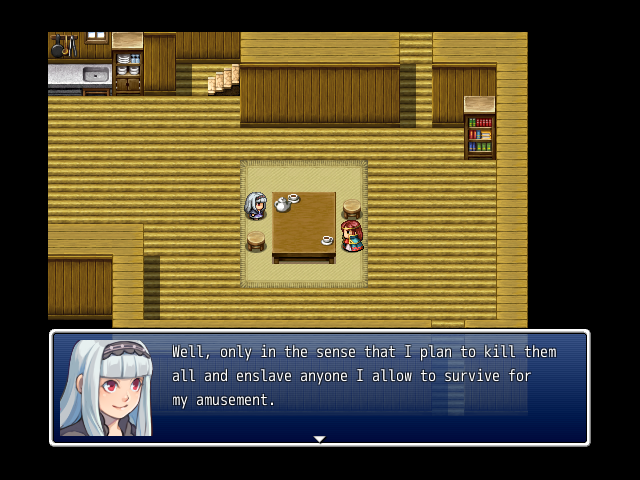 I am aware her living room is much too big and empty. 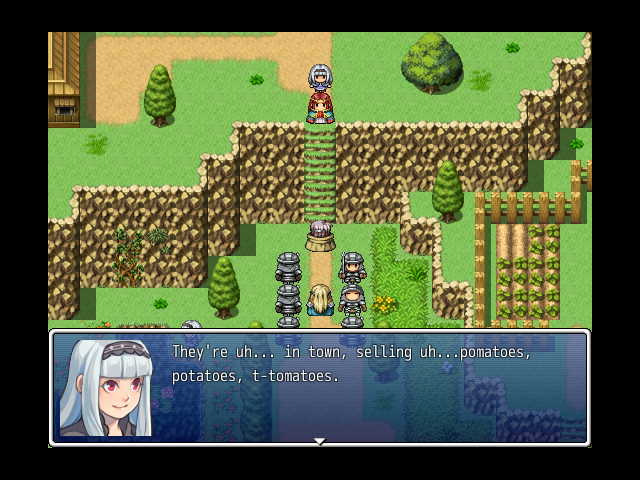 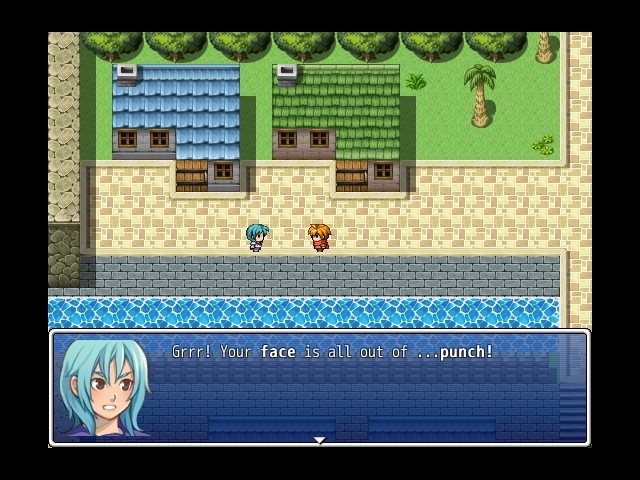 It's really not Ralph's fault, sheesh. 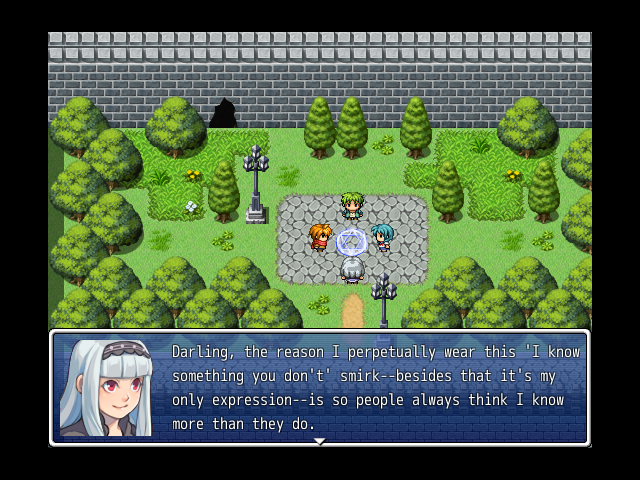 Only time I broke the fourth wall.

author=OzzyTheOne
@StormCrowI really like yer maps, but those interiours are gigantic! You can definetely scale them down.

Those aren't actually my maps. They're the pre-loaded sample maps from Ace. NOT BECAUSE I'M LAZY: it was an artistic decision, damnit. Really. If you knew the premise of my game it would make more sense but right now some mysterious (and hopefully ULTRA-TALENTED) stranger is working it to the finish line so I'm gonna keep my lips zipped (it's also why I'm not posting more/better screens). Anyway I made most of the interiors less bad (and in general I edited many or most of the maps to the point where they were scarcely recognizable) but I didn't do it for Caroline's house. That WAS because I was lazy, lol.

GARBAMESH (video is fucking amazing, ESPECIALLY just the sheer freedom of traversal) but I am curious: two or so usernames back, you're the fellow that was working on the ABL Remake, right?
Garbamesh

I was planning to redo ABL in 2K3 with original graphics a few years back as it is one of my favorite rpg maker games and what really inspired me to start fooling with 2k back in 2001. I thought it would be fun to work on my pixel art and give a face lift to one of my old favorites. I thought the original creator was lost to the ages, but when he found out we talked and he politely asked me to not go forward with the project which I totally respect.

He also encouraged me to work on an original game which gave me the push to go all in on Kingdoms of the Dump.

So not much work ever was done on that project besides some early mockups. :)
IndependentArt

Been adding some new particle effects for waterfalls and even walk splash animations:

From RtP: The Staircase: 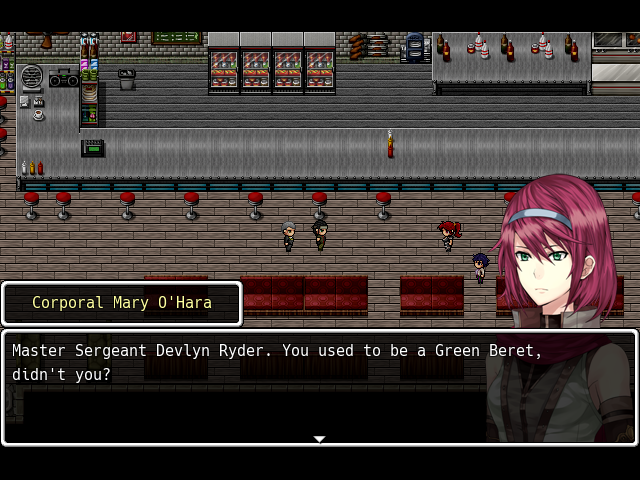 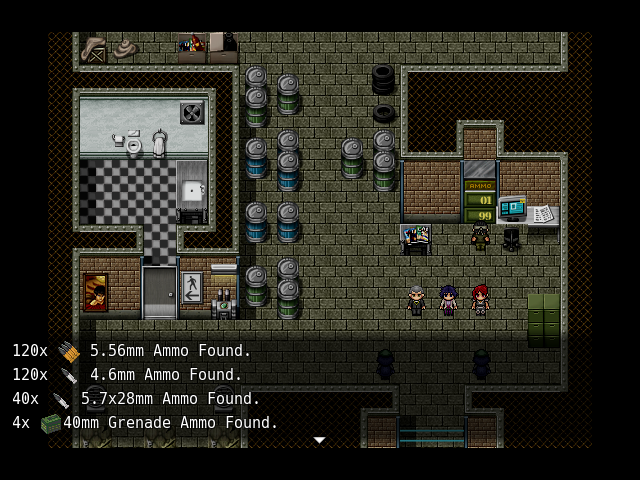 Incidentally I did wind up taking...whoever it was's...painful advice about the pixel clash and I remapped everything I'd mapped of the city of Johannesburg with a different tileset that is (please God don't let me be wrong about this) 1x1 like everything else in the game. So I'll be replacing those screenshots on the gampag eventually. Better 10 maps than 100 (altho honestly given a choice between redoing one hundred maps and literally any other relevant option, I'd go with the one that's not redoing one hundred maps up to and including just noping the eff out of the whole game lol).
Decky 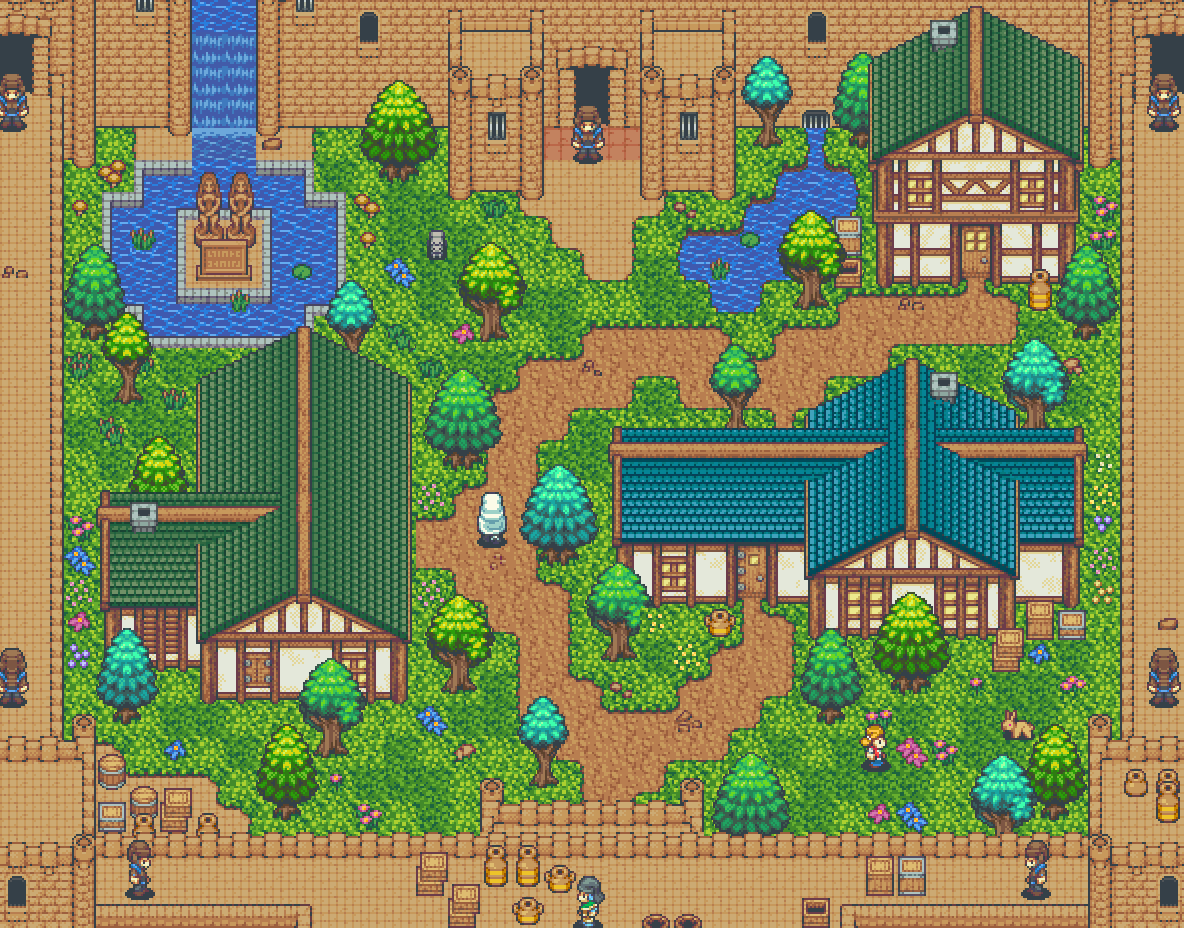 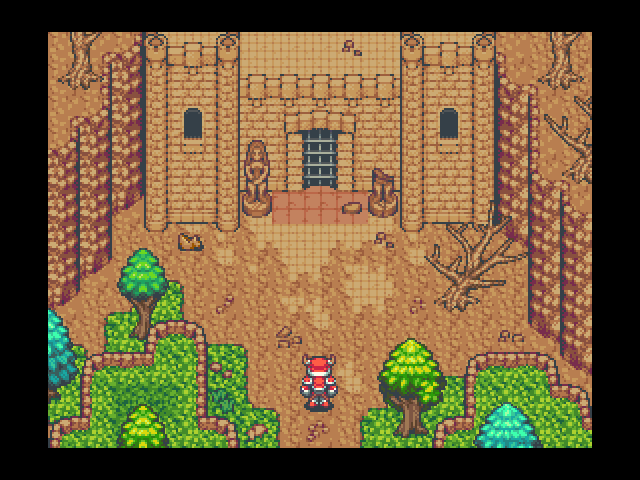 guess I'll post some more screens in the future.

@Deckiller: Is it me or are your picture broken?
Decky

author=IndependentArt
Been adding some new particle effects for waterfalls and even walk splash animations:

I already mentioned this on your game-page, but this looks stunning.

I love how you abandon traditional pixel art for visuals that truly feel raw and gritty, and even use Rm2k3's color limitations as part of your artistic direction. You don't see that accomplished very often. Reminds me a bit of JPC's old maps.
scitydreamer 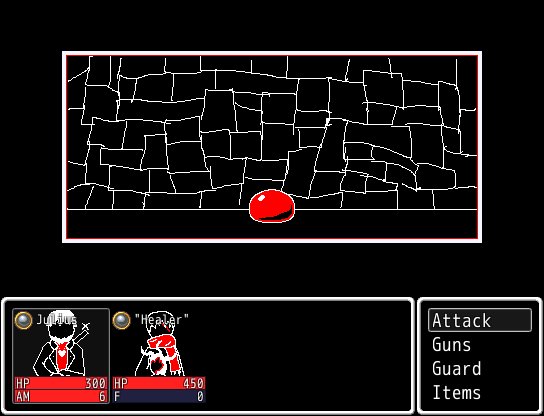 I'm currently trying to make a short RPG and I'm aiming to mainly use three colors for the whole thing. I recognize the battleback needs work but I wanted to show some progress.

Say, does anyone know how to remove the nametags in the battle menu, while I'm here?
IndependentArt

author=Blind
I love how you abandon traditional pixel art for visuals that truly feel raw and gritty, and even use Rm2k3's color limitations as part of your artistic direction. You don't see that accomplished very often. Reminds me a bit of JPC's old maps.

Thanks again, I really appreciate that!

I've been working with RM2k3 for about 15 years now and this game is in the making for 13. And right from the beginning I had this strong dislike towards color limitations. But that was more out of a lack of knowledge. So I would not say, I "use" the limitations. Since I'm using easyrpg now, they are gone anyway. :D
I hate to pixel. It's not that I don't like the style for some games, but not for mine. This is gonna be the darkest and most depressing game of all time and I don't want it to look colorful and stylized. Okay, kidding a bit here ... just a bit.

Think the gif above is actually suffering a bit of compresssion, too. But you'll see that when you arive there, if you havn't already. :)

A sunset transition from my top secret project

(note that the gif limitations lower the quality)
Tw0Face

Close
09/20/2018 10:43 AM
@IndependentArt:
Very detailed work. I like the color and the blurr. Looking forward to see more screens like this one.

@Own progress:
I'm getting on with my combat system, and I'm currently in the process of inserting the movesets and skill descriptions for each character. 
I made a video of the many panorama transitions. It was pretty hard to do that, I had to put an extra panorama picture and remove fade it to 0. You can see bits of other systems (battle, menu, platform) as well.

Some tone transitions might seem too quick, that's cause they're made using the debug. In-game that would happen smoothly.
Sgt M 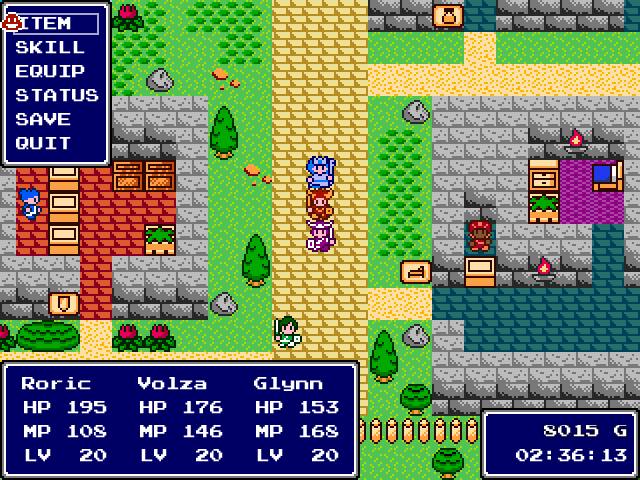 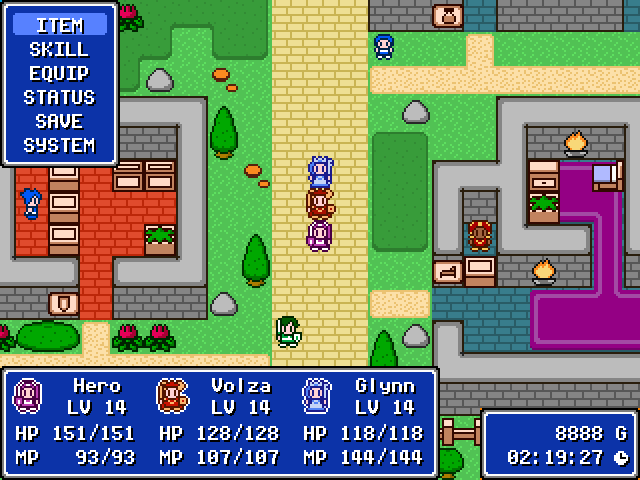 @SgtM: Looks great, I like that the updated tiles are much cleaner and easier to read and the colors are 10/10.
If I was going to nitpick: All other tiles have transition against other tiles except the brick road. It looks okay now, the only thing that feels a little bit off is the one pixel brick at the edge.

Working on some boss stuff. Here you are climbing on a ship.

(Gif a little bit choppy. Didn't seem to like to capture the fast in game animations.)
OzzyTheOne

@NanakyTim I really like your super secret project :O

@IndependentArt that scene you shared is struly stunning I absolutely love how gorgeous the rippling water is.
WeasleX 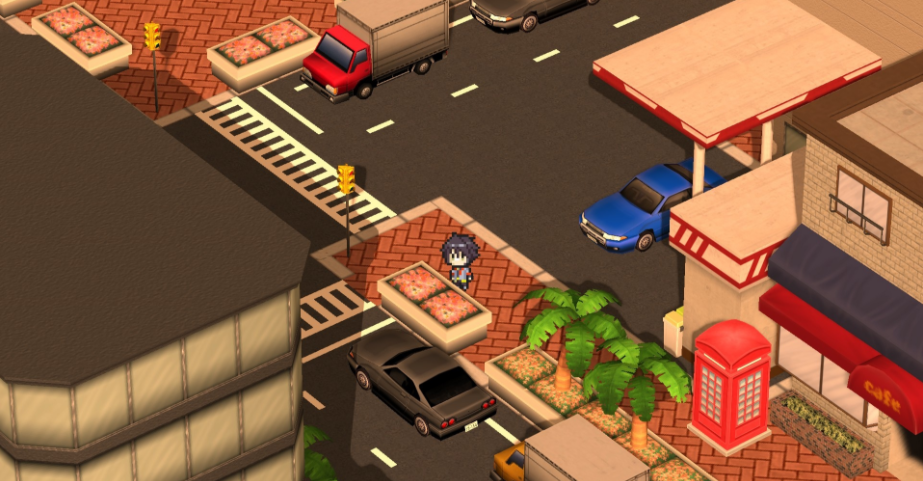