Close
10/10/2018 12:28 AM
@NanakyTim
I'm really kinda likin that fairy effect and would love to see it without compression. However of course it looks a little too dark/opaque. But since I don't really know your game, I can't really say if this is a problem or how it would feel ingame.

I created a new optional enemy today. He's throwing a boomerang that is taking overall 3 turns on the party. Everytime spinning faster and hitting you stronger. Of course unlike the gif, you get turns in between.
Here's a question for you: What would you do against that? :D

generally speaking, "kill the enemy and heal if my HP gets too low" tends to be a good strategy
IndependentArt

Close
10/10/2018 03:44 PM
Yes! Especially on the third hit. I havn't balanced it yet, but I'll try to make that one lethal. :D I'm really trying to promote the defend command and made it attractive by giving it a lot of bonus effects like HP/MP healing, quicker filling of the "limit break" and quciker ATB.
Large

Close
10/11/2018 07:07 PM
That's interesting, I'm planning on something similar in my project. Something akin to the Bravely Default system.
NanakyTim

Close
10/11/2018 08:25 PM
@Independent: Nice idea! Though I hope there will be some hints for the player to know they have to use that command :D (unless you lead them to use defend a lot from the start)

Thanks for your feedback, since you were wondering how it looks like without compression, I made a video:


You have a certain chance to dream when you go to sleep for more than 3 hours. The dreams have no impact on the real world apart from two, linked to the main quest, one of them being the fairy familiar dream you'll see in the video.
Blind

It may have suffered a bit in terms of its atmosphere - any suggestions? Should the overlay be stronger? Should the underlying tileset be darker like the original?

Close
10/12/2018 11:59 PM
Since there's a torch in the area, perhaps it should be darker. To give the idea that a torch is needed. Otherwise, it looks as if the tileset could double as an outdoors tileset.

The quality of the tileset itself seems way better than the Rudra tileset, though.
Roden

ALL THESE WORLDS ARE YOURS
3772

If I'm gonna complain about the light, I'd say my complaint is that its a white light from a red/orange flame, and it seems inconsequential cause the area is brightly lit otherwise.
Frogge

author=Roden
The ground should be greener, like the original. Creates a nice contrast that the new one is lacking.

Yo seconding this. I love how organic the first one looks. Second on is great too, obviously, but it just doesn't have the same charm to it.
Blind

author=Roden
The ground should be greener, like the original. Creates a nice contrast that the new one is lacking.

Yo seconding this. I love how organic the first one looks. Second on is great too, obviously, but it just doesn't have the same charm to it.


Noted! Do you think it’s mainly a fault of the tint/lighting or the actual tiles?
Cap_H

Close
10/13/2018 05:41 PM
I think it's both to some regard. The dark greens and browns of the original create a completely different atmosphere. The new grass is lighter with a distinctive detail. That on its own changes the nature of the map. The new chipset is busier on its own and I think you might find it pretty hard to create the same subtle atmosphere.
Still, I would try to make a darker overlay with some orange/yellow undertones close to the torch and blue/white tones to signify moonlight elsewhere.
InfectionFiles

Close
10/15/2018 12:18 AM
Blind - old version is more klimatic, new has better tilesets (except bridges - she seems kitschy shading). Generally if I were you do new version more dark.

I am crazy XD - I give intro for my game in gif XD, (this requires yet polish, and I must change facesets for more matching to characters, but this is yet almost finished).

XD - first, sea scene in editor - yes in this map I jumped over events limit with "parralel events" trick and this work OK...
Show 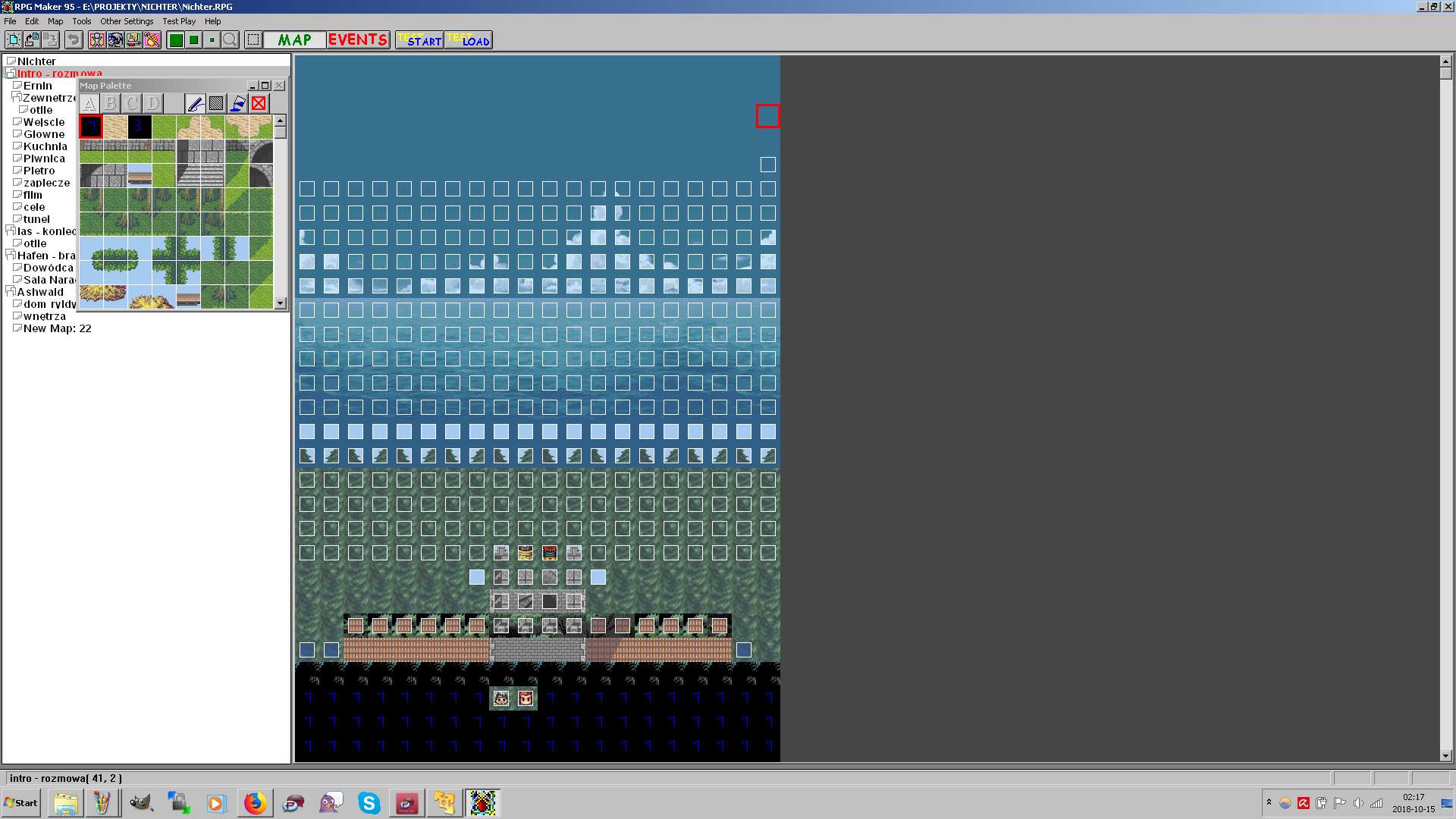 author=IndependentArt
Yes! Especially on the third hit. I havn't balanced it yet, but I'll try to make that one lethal. :D I'm really trying to promote the defend command and made it attractive by giving it a lot of bonus effects like HP/MP healing, quicker filling of the "limit break" and quciker ATB.

I don't see HP/MP recovery on defend going to well. It's just going to encourage the player to kill all but one enemy in normal battles and then defend a bunch to get their resources back up. If your MP is that easily recovered - and through a boring method - you may as well not have it. It defeats the purpose of being a resource to care about. Personally, I'm not a fan of passive resource generation. I didn't even care for Bravely Default's mechanics. Xenosaga did the "build a resource that let's you get more turns" thing better. You built it up by actually taking action and landing hits on the opponents. This creates better pacing than just passing on turns.

In general, I'm skeptical that gussying up the defend command with extra effects will actually change the player's usage of it. I think you need to get deconstructive about the necessity of the command and it's purpose. The idea of taking a turn to raise defense is needed to mitigate burst damage. If you have to encourage the player to do it for any other reason, then I wonder why you need it at all.

I think the main reason it goes underused is due to poor play conditioning. A LOT of RPGs let the player win by brute force and make it so the enemies are never threatening enough that the opportunity cost is worth it to defend when you can - as another poster above said - just attack and heal up (and the player will heal up easily if they got all their MP back on normal battles by passing turns at the end of each one). The solution would be properly conditioning your player to see the necessity of taking that opportunity cost. Show the player that enemies deal burst damage that they can't out-heal before a party wipe, show them that the defend command is a useful tool for dealing with that, maybe even make it negate 75% damage instead of just half, make healing spells expensive so they can't out-heal all damage. For reasons I've never understood, most RPGs make heal spells the cheapest, I feel it should be almost the opposite. Maybe even put cooldowns on the heals depending on the difficulty you want. Not letting the player carry 99 potions, ethers, and phoenix downs would also do wonders for making me care about mitigating damage before it happens instead of just patching up afterwards.
IndependentArt


Not sure, what your suggestion is here.
But maybe that's what I did by implementing an attack combo that'd be lethal, if you don't defend.

However I havn't really considered the "danger" that players would heal with defend at the end of every battle. I don't think, many players would actually do that. Just because they're lazy. :D They might do it, if they have like no potions anymore. Otherwise they'd use them to heal after battle.
I agree with you, that MP is an important resource. Sometimes in battle you are missing juuust some MP to cast the spell that you want. Then I feel it's convenient to just defend once, get the MP and cast the spell. One character actually has a special technique where she gets only 25% damage, heals double HP but no MP.
Potions: In my game you can carry 99 potions. BUT every character has a potion tolerance. So they can't consume them limitlessly. I added this feature just recently, because I find it anoying when success in battle only depends on potioncount. However it's usually just relevent in boss batttles.

btw, someone tested the mentioned battle for me: https://youtu.be/N-3YXOWA6BY?t=5380
it's german, but I guess you can understand, what's happening.
EtherPenguin
0

Close
10/17/2018 09:16 PM
@IndependentArt
I was mostly saying that part you quoted in relation to the idea of play conditioning. Your combo attack is a way of showing that to the player - if it's not just one fight but something recurring that the player learns to deal with by defending early on. Anything the player learns is okay early on, they'll continue to think is okay throughout the game and get frustrated when it stops being okay. Like, if they can get halfway through without ever having to defend and always just healed up afterward, they'll find it unfair when all of a sudden that stops working. Ideally challenges should continue to build on top of what the player has learned about mechanics. When they learn new stuff, it's an organic outcome of learning the old stuff. You're video of the battle looked good, but it's hard to judge what your whole game is like in regards to teaching players that defend is worth the opportunity cost. If you're already doing that, then I'd say you're golden.

It should also be noted that burst damage doesn't have to be one hit KO to condition the player into preemptively mitigating damage. For me, I'm not crazy about "do it or die!" type of things, I sort of like it when burst damage is more about making characters squishy so that sustained damage becomes threatening. That's where the whole they of making sure players can't out-heal comes into play. If mitigating damage is important than healing should be too costly to get out of that squishy state (but not down right impossible as you'd want the player to have flexibility). In a system with heal on defend, I could see myself not caring about mitigating the damage and just pass a bunch of turns afterward to have the defending negate any threat of sustained damage and heal back out of the danger zone (and I have played a game that was exactly that). That may not be what you want though. If you're into that instant KO if you don't act preemptively kind of burst damage and are able to telegraph it to the player, then that should be fine. I'm just saying there's other ways.

I like the sound of your potion tolerance idea, seems like a pretty nifty mechanic. The video of your combat in action looks good. Keep up the nice work!
EtherPenguin
0