author=nemojbatkastle
Something I had lying around from one my many aborted attempts from rm2k.
A few pieces were ripped from the mysterious Commander Thule's very excellent ff3 maps, so lots of credit to him.

Why thank you and I'm confused too!
bulmabriefs144

Close
11/05/2018 04:10 PM
Speaking of 4 years ago I went through a nostalgia trip and looked at a whole bunch of other posts (up until like page 40) and I gotta say y'all have such nice maps so good job to all of you actually 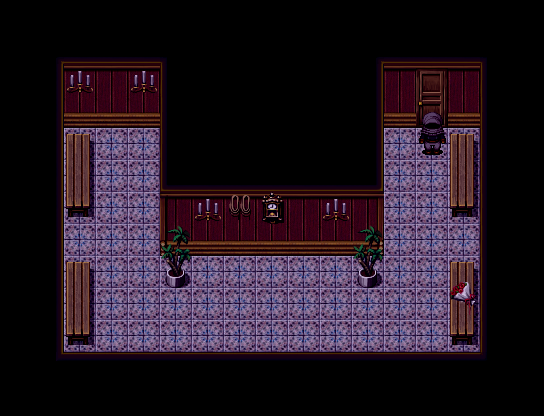 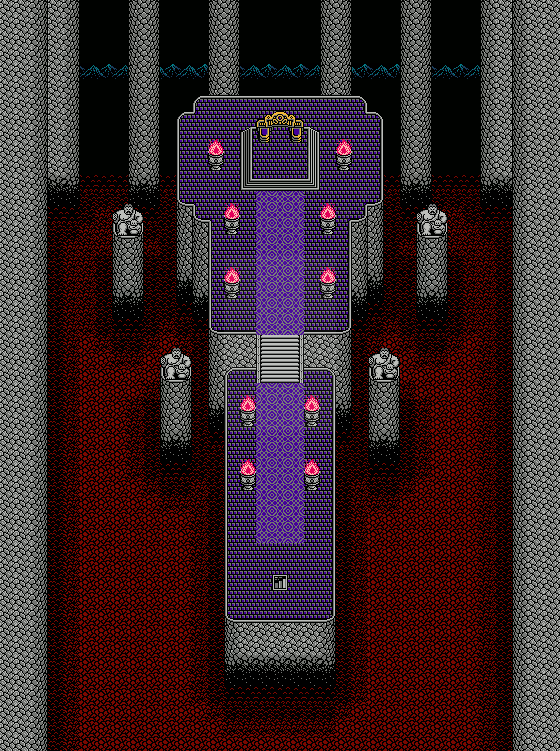 author=Pyramid_Head
That looks really cool. The colour palette reminds me of Just Breed.

Close
11/07/2018 10:45 PM
@Koulucky: Thats looking dope as all hell. I usually find those NES style colour palettes pretty garish but you got that looking tight as.
Faye

This is from the inside of the cirice (cirice = old english for church). It'll be for my IGMC Entry - Heartland. Game features no dialogues, having second person texts told by a narrator. The game is rather moody and atmospheric, focusing a lot on sounds, literature and music. When I say sounds I mean natural sounds (blowing wind, grass footsteps, rain sounds). Throughout the narrator sayings you'll see that nihilism is part of the game's mood, as well as the story itself.

Ironically, the gameplay will be of a roguelike dungeon-crawler. 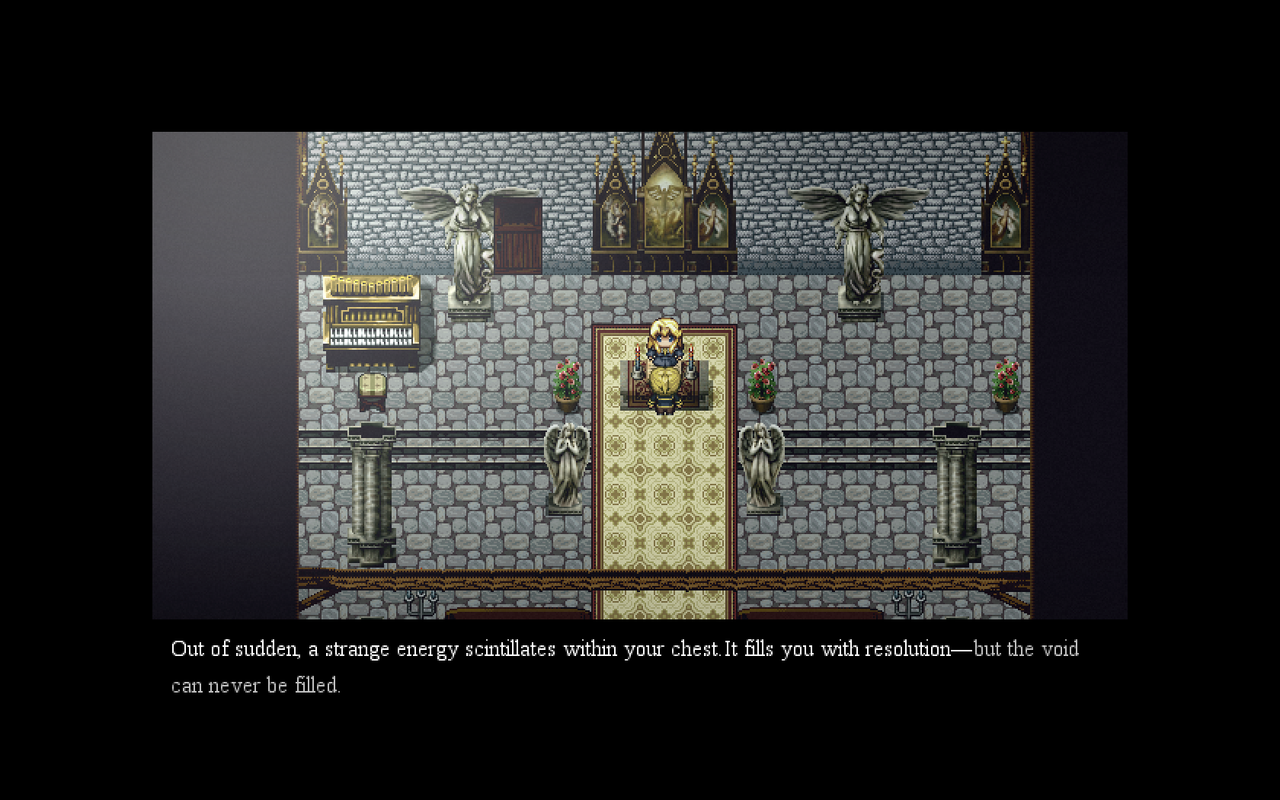 @Faye: Looks great, I especially like the statues!
Also, yup, it's supposed to be lava.

Here's an updated version of the image I posted previously, I replaced the throne with a more demonic looking one to accommodate the lord of darkness Erebus, and modified a few other things a bit: 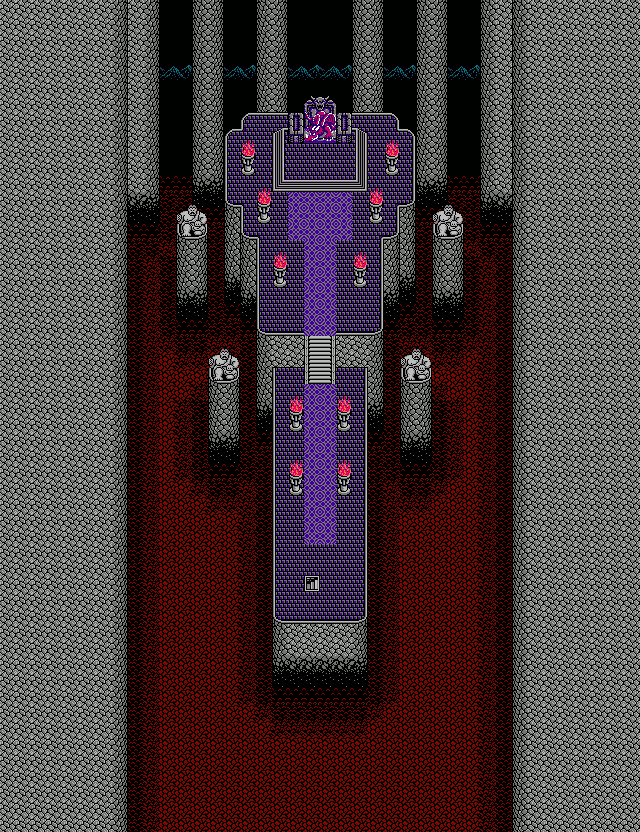 This is from the inside of the cirice (cirice = old english for church). It'll be for my IGMC Entry - Heartland. Game features no dialogues, having second person texts told by a narrator. The game is rather moody and atmospheric, focusing a lot on sounds, literature and music. When I say sounds I mean natural sounds (blowing wind, grass footsteps, rain sounds). Throughout the narrator sayings you'll see that nihilism is part of the game's mood, as well as the story itself.

Ironically, the gameplay will be of a roguelike dungeon-crawler.

The artwork is awesum in this game. However, there's something cheesy about this line of text. Also, "out of sudden"?
StormCrow 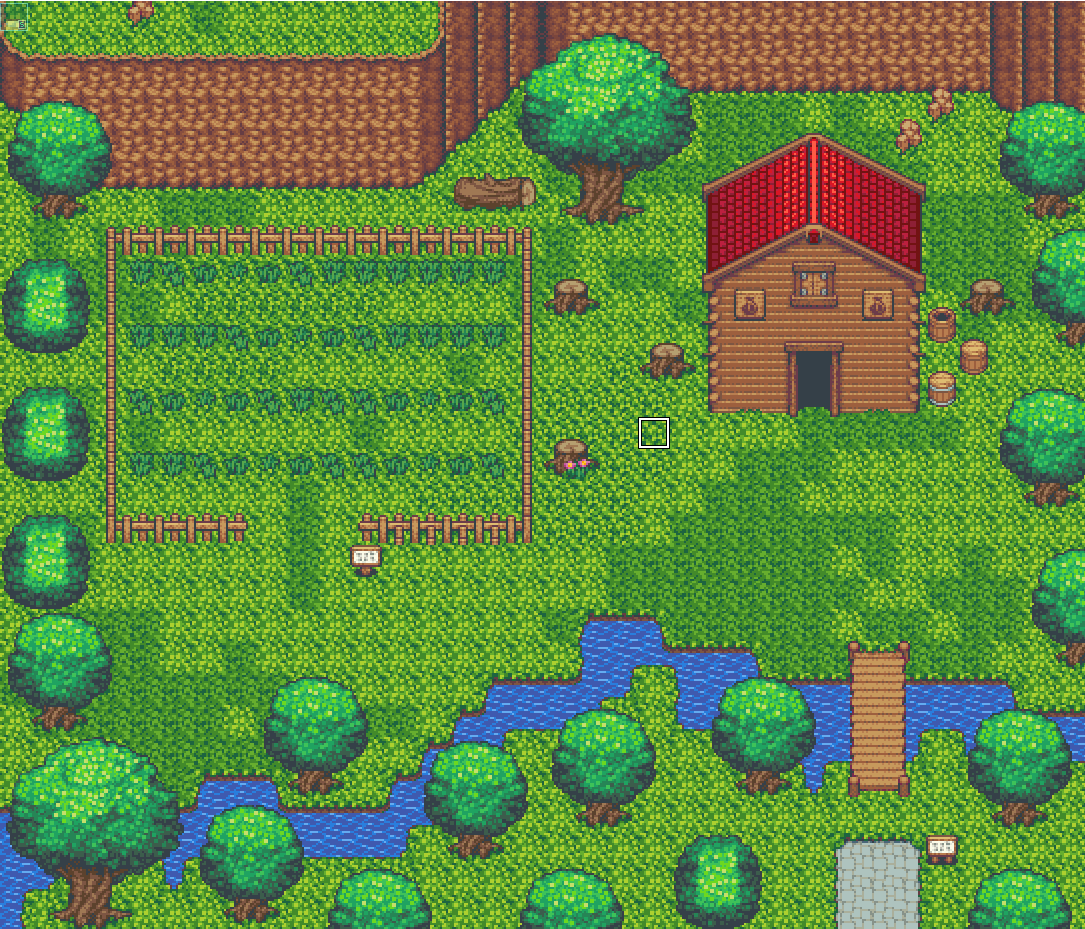 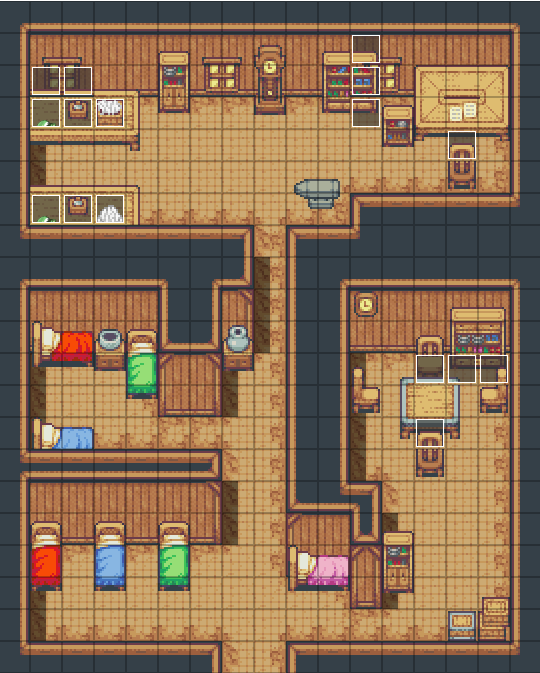 My first time actually using the Time Fantasy graphics I bought several years ago. I think I quite like them!
Craze

Close
11/11/2018 04:22 AM
stormcrow, i feel like time fantasy stuff needs to be closer packed-together since it's not really much interesting going on... doing some edits like the chairs closer to the table would help it look good. The grass is also way too bright, imo.

faye: same for pulling things closer together imo. maybe making the letterbox less hilariously huge so you can actually see the top of the walls and whatnot lol?

my igmc entry is also centered on nihilism, but more to use actual writing to mock games that have no message other than meaninglessness. 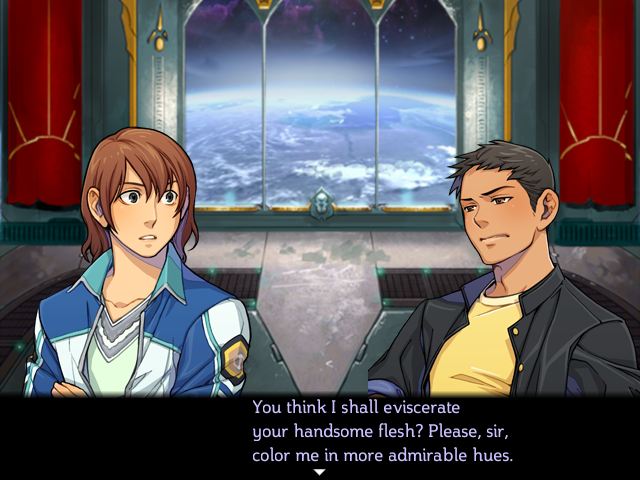 fun fact, it's the sequel to wine & roses.
Faye

@bulmafriefs144: Thank you :) and what sounds cheesy to you, though? it could help me make the dialogues better :) also, yeah "out of sudden" - sounds too weird or doesn't make sense at all? forgot to say that english is not my native language.

@Craze: uhmmm, if by letterbox you mean the black borders, the game has only 32px tall black borders (top and bottom) - it looks that big 'cause of the fullscreen aspect ratio, and that part being taller than the visible area of the camera. And I did that on purpose because there's an interaction there, let me illustrate

@Stormcrow: hey, I like the second map's layout. Perhaps the first one looks a bit empty, but not bad overall.

Basically what it does is a smooth camera pan there, then back and finishing with a dialogue text.

Now for the actual today's screenshot! This is Heartland's lake - The lake is heart-shaped, but the player only notices it when they circle it. By the way, the game, besides the dungeons and the shops, is one single map. The lake's at the forest, and when you get near to it... well, rain happens ;)And yes, those are rain splashes on the lake. 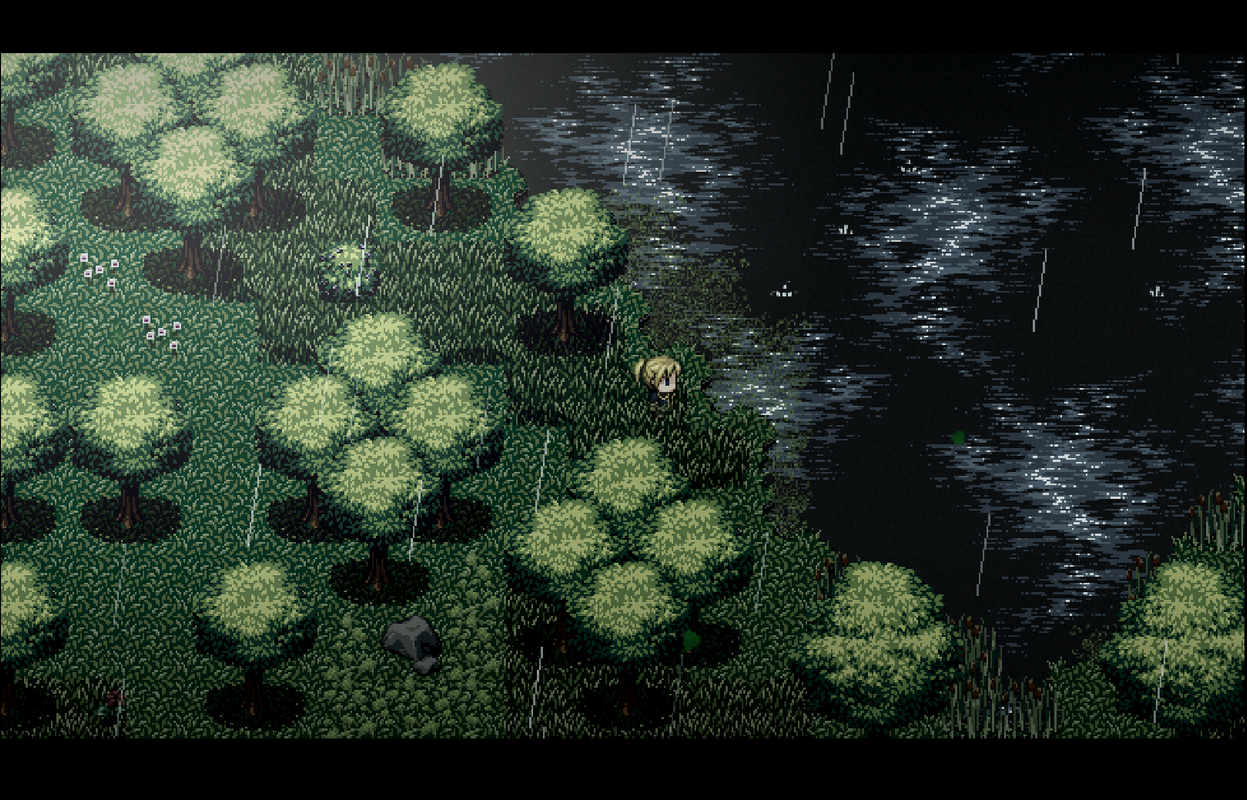 You also normally don't use the word scintillate with regard to hearts, a heart beats (resonates) the word scintillate is used with regard to conversation usually because it refers to something full of sparks. You could use it that way I suppose, but it feels off somehow. Hearts are sometimes said to burn but sometimes similar words in English don't really read the same way because of different connotations.

To kind of put it in perspective, you might say "her heart scintillates with growing warmth, while something scintillating inside your heart probably means you are having a heart attack.

The stuff after it about being "filled with resolution" and "but the void could never be filled" is what I mean by cheese. But it's good cheese, leave it in.

So it would be:

All of a sudden, a strange energy resonates within your chest. It fills you with resolution - but the void could never be filled.
Frogge

Close
11/11/2018 08:47 PM
@bulmabriefs144: oh, I'll just change it to "suddenly" in that case. Btw, I did not meant scintillate as to the heart, just the chest. I referred to the dictionary and this is one of the definitons I found "to emit quick flashes as if throwing off sparks : SPARKLE
stars scintillate in the sky" And it's synonyms are "flash, glance, gleam, glimmer, glint,shimmer,sparkle, twinkle" amongst others, so in regard to the chest, I think it's clear that I refer to an energy scintillating inside her chest. Perhaps I still can be wrong though - makes sense to me in spanish but dunno much well how semantics work here.
bulmabriefs144

Stars scintillate. A conversation or someone's talent/personality might. Possibly your zippo does. The fire might as it crackles. An illusion a spellcaster makes with bright colored patterns might. A cut electrical wire spewing out juice might. Even I'm not sure everything that scintillate refers to, and English is my first language.

The energy should resonate (referring to the way it beats in tune with the heart in the chest) or glow (referring to the magical aura). Or actually sparkle (not scintillate, which only has sparkle as second definition, as dictionary defs usu have most common one first). But if the energy does scintillate, this means a few things, none of them good. Either the spell is fizzling, meaning a misfire is about to happen, or someone's pacemaker is sending out crazy electric signals, and someone is about to have a heart attack. I didn't think you want those connotations. But this whole line is cheese, so yeah whatever.

Alternatively, if you absolutely must use scintillate rather than glow, gleam, twinkle, flash, glimmer, or shimmer, then consider doing this. Sub out "inside" for "around". Around could include inside, but the vagueness of the word gives you leeway where people aren't thinking "OMG, her heart is exploding!"

When in doubt, trust ppl who say it kinda sounds wrong. Especially if it's your second language. When in doubt, also use words you are clear about all of the meanings and possible associations of, even if this means simple words.

See also this. Even if you use all words correctly, using complex words when there is a shorter and more direct word winds up being pretentious. Or as this article says, "It takes a certain amount of sass to speak up for prose that's rich, succulent and full of novelty. Purple is immoral, undemocratic and insincere; at best artsy, at worst the exterminating angel of depravity." Or this from the Tao te Ching, "Sincere words are not fine; fine words are not sincere." You want your audience believing your story.