author=LockeZ
I suspect it's in your Google Drive private files. Use your RMN locker!

I tried it from a second browser to make sure it wasn't just me.


author=JosephSeraph
yeah i can see the image perfectly

Close
07/08/2016 06:26 AM
I just tried it on my phone, which uses a different internet service than my computer, and it still doesn't load! I think JosephSeraph has hacked into your Google Drive account.
Illy

author=LockeZ
I just tried it on my phone, which uses a different internet service than my computer, and it still doesn't load! I think JosephSeraph has hacked into your Google Drive account.

Close
07/08/2016 12:06 PM
that's... really odd xD
well, GD isn't exactly an ideal image sharing service anyway. There's imgur for that, or the good old post-on-tumblr-then-link-the-img-url
i don't host images on my lockerspace because i'd rather save it for resource packs xD
Jeroen_Sol 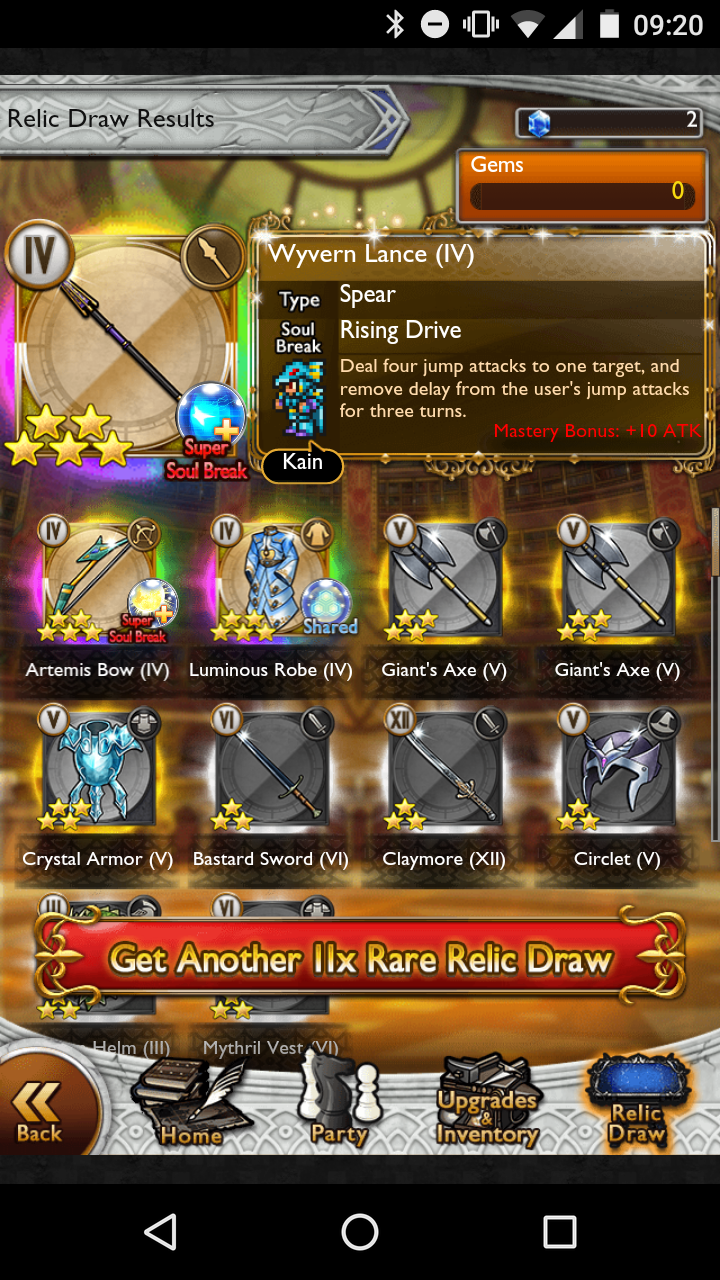 I do wonder when I'll get my first BSB though.

Also, I think I should just start using my endless supply of Adamantite to upgrade my weapons, even if they give less experience. I keep running out of Scarletite, but I have 51 giant adamantite, 137 large adamantite, 312 adamantite, 137 small adamantite and 19 tiny adamantite. I need more and better armour.

I also thought it'd be time to get Tyro's MC2 in the annex. Here's to hoping he'll actually drop Dr. Mog's teachings, unlike Cloud, who is now lv. 76 without growth eggs and still hasn't dropped Mako Might. >.<
LockeZ

Close
07/14/2016 04:43 PM
Yeah, nothing wrong with using adamantite on weapons. I did that for quite a while. You get way more 5* weapons than 5* armor from banners, but the game gives equal amounts of the two ores. Just be aware you'll also spend twice as much gil that way.

My FF7 synergy consists almost entirely of bracelets, and my only soul break is Barret's grenade bomb, an AOE attack + armor break. I'm not even going to try the ultimate missions for Sephiroth. Without hastega, medica or boostga, it's just not worth the headache, despite my natural inclination towards completionism.
Kaliesto

That, and I can't start the battle with SS2 in the first place, because neither Tyro's nor Cloud's RM2 will ever drop for me. :/
LockeZ


Pro tips:
- Minor fire resist is -10% damage, moderate is -30% damage, major is -60% damage.
- If you equip multiple pieces of fire resist gear on the same person, only the strongest one counts.


How I did it:
- Moderate fire resist at minimum on everyone. It's -30% damage from every ability that matters.
- You need both wall and runic, even though two of his abilities ignore wall.
- You need NATIVE wall because you cannot afford to let it drop and the battle lasts way too long. If Runic drops it's not as bad.
- I had Quistis using Drainga which was healing her for about 1200 damage, thanks to synergy and Edea's buff. Wish I'd had room to give Drain Strike to Bartz, because I needed more healing desperately.
- You want magic breakdown if you can help it; full break isn't good enough.
- I gave magic breakdown to Tyro and also gave him Curaja to act as my second healer. This might have been a mistake. I think I really should've just give him healing abilities and nothing else. Ifrit is SO FAST and you need SO MUCH HEALING.
- I also had the doublecast white magic materia on Penelo, for even more healing. Every time it procced I was SO HAPPY. Still wasn't enough healing, though.
- I won after like 15 tries because I got lucky with Ifrit wasting turns on Firaja at the right times.

My FF8 synergy is pretty good and I had an FF8 weapon on everyone but my main healer. Resistance is WAY more important than defense.

If you have both wall and runic natively, I think you'll have a much easier time than me - I'd recommend bringing either Minwu or an AOE heal + magic blink as your roaming warrior in that case.

I heard there's a way to do the challenge mission by bringing Rinoa's burst soul break as your roaming warrior, and having both Rinoa and Edea nuke the shit out of Ifrit with crazy strong ice magic. But I'm not sure how you're supposed to survive Hellfire in this scenario since you don't have wall.
Jude I spent like two hours on Tuesday night trying to complete a Cid Mission Ifrit, but temporarily gave up and easily defeated the boss with the above party. It wasn't the exact setup I wanted because I used most of my favorite roamers on my CM attempts, so I ended up trying weird things like giving Selphie Blizzaga. Killed him all the same, so I didn't worry about it.

Later that night, after my roamers reset, I revisited the Cid Mission and cleared it with the following, after much save scumming to not get Meteor'd repeatedly: Did the Nightmare CPU last night, which was easy once you understand the timing. Got Assault Arm for Barret and Sirius Sidearm for Sazh through a Lucky Draw. I probably won't start the upcoming FF5 event until I catch up on Gysahl Greens.
LockeZ

For the challenge mission, you didn't bring wall as your roaming warrior? I mean, I know Hellfire ignores it anyway, but... 3k Meteor and 3.5k Firaja. And 2k AOE Firaja. How
Jude

Close
07/29/2016 04:56 PM
You can't defeat Ifrit in 50 seconds of Wall without other perks to make up for it. Haste and Boost/Faith are a lot more important, because otherwise your damage is very poor, nor can you react quickly enough to heal damage.

With my CM party, the main complication is Meteor, because he is fast enough to cast it twice before I can respond with a party cure SB. I can get off a Curaja and Curaga before his second cast, but that only saves two people who either can't heal themselves or can't do any damage to finish the fight (in one attempt, I almost wrapped it up with a Selphie and Laguna duo, but the moment Irvine's breaks expire you die). AoE Firaja followed by Meteor is nasty, but survivable as long as I lob my cures at the right people. Basically, my CM success relies on crossing my fingers and hoping that Ifrit uses anything but Meteor after he uses Meteor. One thing that really helps mitigate that RNG factor is Selphie's Dreamstage, which I acquired during the BSB Festival, due to its Magic Blink. Ifrit is fast enough that Lionheart RM got me one extra Dreamstage over Mako Might.

My first clear was easy primarily because the party is so safe. I have two cures, Dreamstage, Stoneskin, and Runic. The party doesn't do a lot of damage, but Meteor does a far more manageable 2k, which means I have plenty of time to heal everybody up even if he uses it twice in a row or more. I don't know how vital Runic is to the fight, because without some kind of Boost my Celes wasn't doing much damage, but it means one less person to heal against AoE Firaja/Meteor and the single target ones can just be ignored altogether. Papalymo was my big damage dealer and his SSB hits for like 35k once he gets En-Ice up and running.

My damage was also very good for a physical party. Laguna was doing 4.5k with Lifesiphon and Armor Break, while doing 31k with his SSB. Rinoa was capping Blizzaja, but could also Curaga for 3.5k and use that shared First Aid for 1.8k. Zell's Piercing Strike does 8.2k, which is why I went with him over Squall, who could still do good damage with 7.5k Blizzaja Strikes. Irvine did about 4k with Magic Breakdown and Full Break, and I think 10k-ish with Canister Shot after the first one. Got Laguna and Irvine's weapons on my 50-mythril pull on the first banner, which were both good items for this fight.

One thing you can try is controlling Firaja with Magic Lure. If you're using a mage party then Golbez can also sling Blizzaja, Ingus can Magic Breakdown (MBD and Full Break are vital for this encounter), and any of the paladins can heal or Haste. One of my more successful attempts used Haste instead of a Hastega RW. Alternatively, there's also the Memento of Protection ability, which is +50% DEF/RES and only Knight-3 so it's cheap to hone.

Edit: Tried Ifrit again but swapped Celes out for Rinoa. Gave Blizzaja to Rinoa and gave Blizzaga to Papalymo. Felt just as safe as the Celes run because Stoneskin reduces the damage of Firaja/Meteor so much, but Rinoa does more damage than Celes. Still used Inaugural Parade as my RW, which I should probably phase out of my friends list now that I have two Hastemarch.
Jude

Close
08/02/2016 09:30 AM
Thinking about recording all of the ultimates and higher from now on. At the very least, I've recorded the Ifrit party I referenced in my previous post. I did it from my desktop. I'll probably try the next one from my tablet, since touch is a bit easier.


Haven't even started the FF5 event yet. Trying to accumulate some greens because I want to buy all of the 10k stamina shards and get them out of the way.
Jude

Close
08/05/2016 08:34 AM
Now that double greens is over, I used today to catch up on the FF5 event. Made some dramatic errors in my CM Leviathan run, but defeated the boss in spite of those mistakes.

Close
08/10/2016 05:17 AM
Looks like orb festival starts tomorrow--my favorite sloggy grind that I loathe but inflict upon myself anyway. Tonight's ultimates:

Close
08/10/2016 11:20 PM
Say Jude, since you're on the FFRK train and whatnot, perhaps you can help with getting images for the wiki, hmmm? I believe I've asked this before, but they're still trying to get images (mostly the default Soul Breaks and ability images). Would help a lot if people could help contribute to that in any way~ ^^
Jude

author=Xenomic
Say Jude, since you're on the FFRK train and whatnot, perhaps you can help with getting images for the wiki, hmmm? I believe I've asked this before, but they're still trying to get images (mostly the default Soul Breaks and ability images). Would help a lot if people could help contribute to that in any way~ ^^


If it's a Wikia site, then no thanks. One of the most toxic websites on the internet.
Xenomic

author=Xenomic
Aye, it was for the FFWikia. Though if I may ask, why the disdain? o_o;;