SORRY IF THIS IS THE WRONG BOARD

Close
06/06/2016 12:59 AM
I Am looking for free cool ideas to put in my game I am useing rpg ,aker vx and it will be in the ancient times and and I want to make it kind of like a final fantasy fan game as but still difrent but like useing the old
sprints thanks
unity 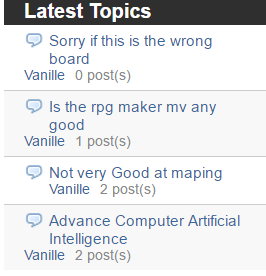 Are you a spambot? XD
Mirak

Close
06/06/2016 01:46 AM
I'm willing to share my bountiful knowledge of cool free ideas in exchange for a gift coupon of mcdonalds
pianotm

Hey, it's been a while since I've had one of those frozen coffees!
LockeZ

It's a fantastic adventure in a wonderful land populated by strange creatures and steeped in constant struggles for power. The cast is a lovable, myriad bunch.

The main character is from a faraway land, one of the last of his people after an evil tyrant almost wiped them all out long ago.

His best friend is a bald midget with a sense of style, always looking for love, a reason to settle down and give up the adventuring life.

The main character's mentor is a wise old hermit with a raunchy side that he has difficulty hiding. He means no harm but gets himself into trouble all the time. His pet turtle tries to keep him in line.

The main character also has an arch rival of questionable moral standing. He fights on the same side, but you always get the feeling he might turn on you. He is also from a distant, obscure land and hails from a race of dextrous fighters with lithe, hairless bodies and pointed ears.

Together they search the world for a set of ancient artifacts that, when brought together, bring forth a powerful demigod that has the power to grant wishes.

Naturally, other forces search for these artifacts as well, and the characters must defend themselves and their families from those who would use the wishes for evil, including the main character's long lost brother, the dethroned prince of the faraway land, and even the evil tyrant who long ago laid waste to the main character's homeland and people.

All yours if you want it.
iddalai

Close
06/08/2016 05:06 AM
What if it was like final fantasy but theres nothing wrong with the world so they just go on a series of dates. Could match up cloud with squall and vise versa
Vanille

Close
06/08/2016 06:38 AM
No, that is the opposite of what you do. You are the worst at asking questions and talking a lot. You don't ask anything meaningful and you explain nothing. The point of this topic seems to be you asking "please design a game for me, I don't care what it is." Your other topic is about one million things, offers no detail about any of them, and doesn't seem to be asking anything. You also seem unable to form a coherent sentence, making most of your posts somewhat unintelligible. Your avatar is weird, two of the links in your profile are broken, and you smell bad. Step up your game.
iddalai

author=Marrend
I'm gonna take a huge guess on my part, and say, it's Vanille, iddalai. Not vanilla.

Umm... I know, it was a joke since LockeZ mentioned the smell, it was a quick step from Vanille to vanilla...

Close
06/10/2016 12:20 PM
Don't start a topic with the name "Sorry if this is the wrong board". It says nothing about what the thread is about and if you're gonna post it anyway it's kinda moronic pulling attention to the fact that you're too stupid/lazy to find out if it's the right board or not.
Kylaila

author=Marrend
I'm gonna take a huge guess on my part, and say, it's Vanille, iddalai. Not vanilla.

Umm... I know, it was a joke since LockeZ mentioned the smell, it was a quick step from Vanille to vanilla...


Vanille, people are willing to help you but we need to know details in order to do so. Starting a thread with a title that doesn't help us know what you need, then proceeding to tell us barely nothing about your game makes it very hard to be of any real assitance. For example, if we say something like "add pirate ships that you have to hunt down" and your game is set in a desert, that's going to make it a non-option, or require you to fit the idea to your world/change your game immesurably.

The more details you give people about what you have and what you need, the more they can help you with figuring out what you can do with it. Just asking general "I need ideas" won't net you much help, sadly, and it will come off as you being lazy and not wanting to think up your own game.

There are topics that already exist that have general-use game ideas. I'd recommend searching for them using the search bar at the top. (Try "share your ideas" or something like that)

Otherwise, please, if you need help make sure to:
- give a title to the thread that will help people know if they can help (someone might not be able to help with graphics, but may be able to help with eventing)
- give good detailed information about what you have and/or need
Marrend

Close
06/10/2016 02:25 PM
...Vanille's been around since 2012. Though, I understand that this doesn't necessarily translate to time making games, or even playing them. Just how long the account has existed.

*Edit: I'm... not really sure what my point was with that statement.

Anyway, the best advice I can give is to make something small that will build yourself toward the game you want to see in this world. Maybe the game will be no damn good. However, as long as you have learned something from the doing, it's not a lost cause!
Liberty