I added a debug setting to disable drawing of all but the root cell (I show this to show where the seams are).
Punkitt

Close
07/01/2016 06:44 AM
Ok, i got impatient.
#5 is to make a playable 'tutoriall island' for my ground-breaking gam. That means to do assets needed for three or four rather small locations and come up with first opponents and skills. Battles will all be about exhaustion and wounds. All damage striking skills have a slight chance of killing opponent pernamently. I'm not sure, how this turns out. It may be fun and it may end up a terrible luck based mess, i'll have to abandon for a more traditional fights. Wounds should stay anyway. It should experiment with hud too.
Its a big one. I will be short on internet for next three weeks, so an evidence may be hard to show in time.
Im glad i managed to finish reviewing Fragments yesterday. It wasn't properly proof-readed so there will be more gram errors than usual.
Gredge109

author=Cap_H
Ok, i got impatient.
#5 is to make a playable 'tutoriall island' for my ground-breaking gam. That means to do assets needed for three or four rather small locations and come up with first opponents and skills. Battles will all be about exhaustion and wounds. All damage striking skills have a slight chance of killing opponent pernamently. I'm not sure, how this turns out. It may be fun and it may end up a terrible luck based mess, i'll have to abandon for a more traditional fights. Wounds should stay anyway. It should experiment with hud too.
Its a big one. I will be short on internet for next three weeks, so an evidence may be hard to show in time.
Im glad i managed to finish reviewing Fragments yesterday. It wasn't properly proof-readed so there will be more gram errors than usual.

Kinda' reminds me of Bushido Blade, where there were no health bars, and one blow could potentially be fatal. Kinda' like adding a 3% chance of death to every attack.

My project: JRL is turning into a beast. If it weren't for the one million Common Events I've made, it would quickly spiral out of control. But all of a sudden, I pulled a breakthrough in development. And by breakthrough, I mean, I found some scripts some people made.

I found a good crafting system script and everything is coming together nicely. I've got a ton of items in the game and I intend to make the vast majority of them craft-able: the goal is to have the player able to craft everything out of the gate, but the hard part will be finding the materials.

My whole approach to JRL is to make everything flow, so pretty much everything the player encounters leads to a common event, which can link to other common events, and so-on and so-forth, to where I can just generate new content, apply these common event rules to them, and have everything plug into place. The crafting system, seeing as the game heavily emphasizes scavenging, will play a big part in the cohesiveness of the game.
NeverSilent

Everyone else, good work also! We're in the second half of this event's duration now, so if interest stays high, starting today there will be 3 more weeks left. Considering how much productivity we've seen during the first 3 weeks, I don't doubt a lot can still be achieved until the event's end. And hopefully, it will have at least somewhat of a lasting impact beyond the official duration, too. That's what I'd really hope to see.

The OP should have all the correct information on it again now. Let me know if something is not accurate.


@Preki:
As mentioned above, about half of the event's time is over at this point. Still, I'm happy to still let you join, since it's never too late to be productive. If you want to qualify for the achievement, you might have to hurry up with your goals a little, but it's far from impossible. However, I think that using this event as an occasion to be extra active is more important anyway, and I wish you luck doing just that!


@Punkitt:
No worries, that's okay. I mean, it's not great if you miss a goal, but it just means you'll want to be extra productive again from now on, if you're still going for the achievement. You're not going to be disqualified or anything. That would be a terrible way of trying to encourage productivity. Just give us a new goal of yours to look forward to, and get back on track with it, and you're fine.
alterego

Close
07/01/2016 08:07 PM
Update:
So... I would have had my goal done, but... I kinda... found a really old project and got sidetracked... I should have at least the artwork done by the end of today, though. Kinda need it done quickly, anyways. The deadline for the contest is the 5th, so... Typical me, completing things last second. ^^;
Beaker

For instance, when you press W you move forward, S you move back, etc. In the last demo video, all the movement is in absolute directions regardless of which direction you are facing.
Irog

Actually, this task was easier than expected so it includes the "increase archer range to 2-4" I originally planned for a future task.

As this extended archer range only benefits the human player, I made a build in my locker for you to play with until the AI also gets the extended range.

Goal of next week: Adapt AI to properly use attacks of ranges above 2
El_WaKa

Close
07/02/2016 12:19 AM
And... my goal is complete! Because I edited sprites instead of making them on my own I thought it would be kinda unfair to just complete one "half" of my goal, so I made both the monster and character sprites!

I still got lots of things to learn, but hey, it's a start!
Corfaisus

Close
07/02/2016 04:03 AM
I'd dare say Goal #4 is now complete! Every conversation and treasure chest of Chapter 1 (the cut-off of my longest demo released yet) now takes place in moving pictures.

There was a lot to do. This was actually one of the shorter scenes. The scroll bar on the longest was the thinnest strip possible.

Just about every box had the X and Y variable checks to accommodate it; the only ones that didn't were stuff like treasure chests, but those also had their own thin message displays specially designed for them.

The maximum number of characters any item can have is 20, so I made the box able to fit 21 for the sake of spacing. The dialogue for treasure reads out like:

Of course I may have to extend this loot display picture by a few pixels in case there comes a time when you can obtain multiples of an item that already takes up all 20 characters, in which case the text would spill out over the boundary of the current picture, but I'll cross that bridge if I get to it.
XoeisCooI

Close
07/03/2016 12:10 AM
Goal 3 (technically my 5th, but I forgot to announce two of them here before I finished 'em) is now complete! Since my goal consisted of so many different things, I'll just show you this screenshot of some sleeping nuns (that actually snores Smoke on the Water in-game!). Here ya go: 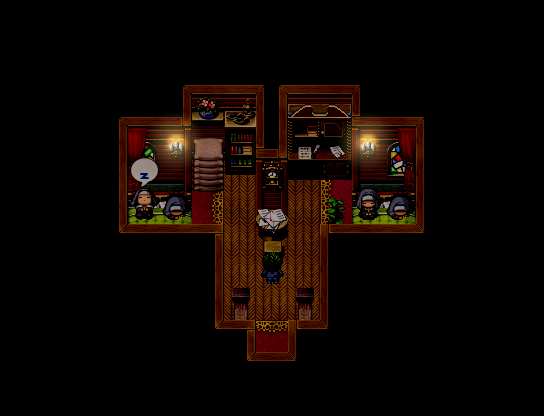 I'm not going to announce my new goal just yet, since I need to make some time for plans.

As always, it's awesome to see so many people getting stuff done. It's a really motivating environment, that's for sure!

One question though; how many goals are we supposed to have completed by now? Am I currently behind or something? O_o
Healy

Close
07/03/2016 02:51 AM
I completed my goal, I think for this next goal I'll try not to confuse myself with the wording, cause I spent some time trying to figure out what I actually meant as the goal. I had to set-up levels 3 and 4 in terms of battle details, so here's an image of the troops, there were a couple more down the list that I just couldn't fit. 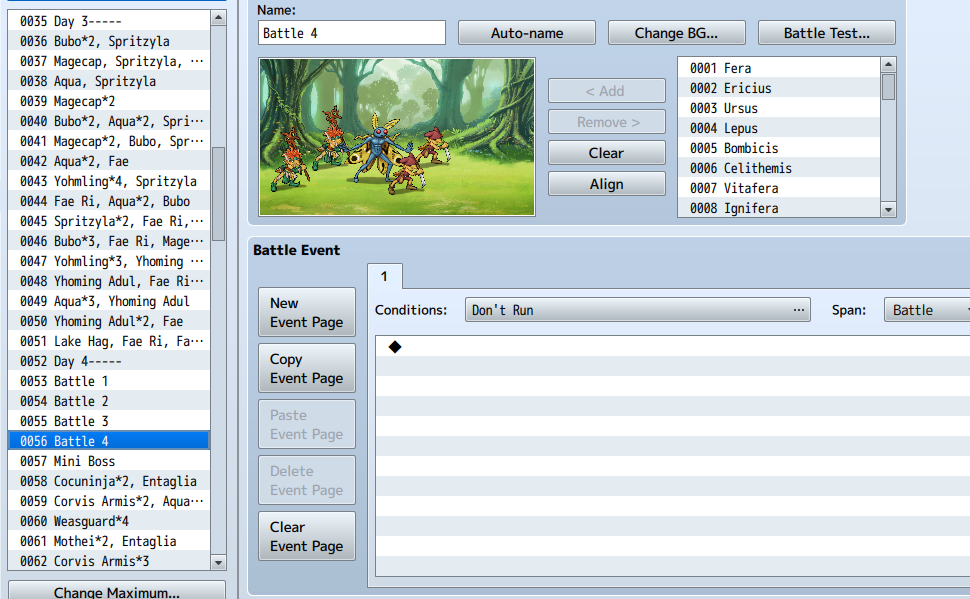 Otherwise, the goal also meant that I had to connect all the maps correctly, place scenes where they will be, for right now there is just a summary of what happens. I'm saving the narrative work for later so we can just test the battles, so I'm pretty sure we can get all the way to the end of the fourth level. Testing will see if it works correctly.

For my next goal: Test/Update Level 1/ Level 2