[RMVX ACE] IS IT POSSIBLE TO STOP ACE FROM RESIZING TEXT?

Close
07/06/2016 09:40 PM
When you put text in a field for the menu or in battle, VX Ace will shrink it if it thinks it won't fit in the box. But I'm using a custom font and VX Ace is resizing things even when there's plenty of room.

Is there a script or a way to stop Ace from resizing things at all? That would be a huge help, if it's at all possible. Programmer thinks it's a good idea to make a game in a low-level language.
4859

Close
07/07/2016 05:33 AM
Find some custom message scripts like Yanfly's or any other scripters to date. However, if you want the more basic solution, you should try this... (but I don't know if it works, though 'cuz I just searched it through the internet.)

Close
07/07/2016 05:57 AM
You can hijack the draw_text function and change the target width parameter. Here's a quick hack I threw together, it'll try to use way more space than it'll ever have when drawing left aligned text. Changing center/right aligned text wouldn't work with this quick hack (it uses the space to place the text and if it has a million pixels offscreen it'll try to draw it there instead):

This fixes all the resizing instances except one, on the character's Level. 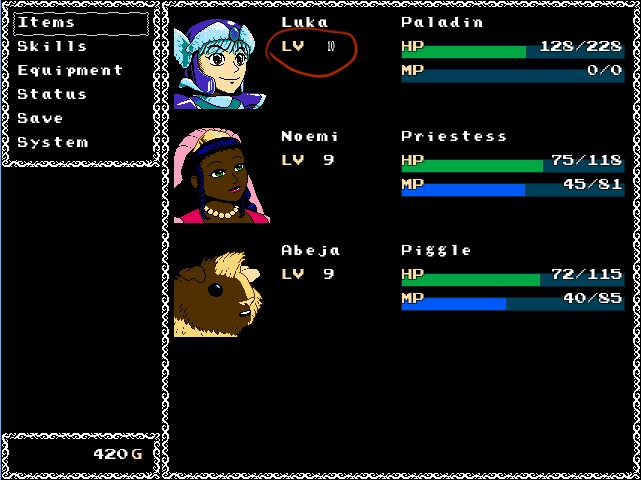 Being at Levels 1 thru 9, things display fine. But at Level 10, the text still goes small. I'm guessing that's because its center-aligned. If there's not an easy way to fix it, I think I can live with it, but if you have any ideas, please let me know.

In particular, the line
draw_text(x, y, 72, line_height, Vocab::level_a)
That number determines the "draw width" of the text! If it squishes again on stuff like Level 100, you can raise it even further to make it fit more.
Do note that it can potentially over-draw to the HP gauges if the width is set too large.
unity

;_; Thanks for your hard work! I really appreciate it! ^_^
(Next time I'll try to find a font that isn't so troublesome XD;;;;)
InfectionFiles

Thank you so so so so much, GRS! ^_____^ You once again totally saved the day!!!
GreatRedSpirit

Close
07/08/2016 04:22 PM
Just a heads up: It doesn't fix the font drawing issue directly, it just gives more space to draw the text than the game will ever need. This does mean that it'll keep drawing text outside of horizontal boundaries the game gives in the same bitmap. This means that long names or strings can run into other text, but generally only in the same window. For example if Luka's name was "Weedlord TurboNerd Luka" it'll draw the full name and it'd run into the "Paladin" text. It usually won't be a problem, just watch out for item/skill names.

e: At the same time if "Items" was "Use this totally kickin' rad item" it's still confined to its bitmap so it woudln't spill into the party status window or anything. /e:

(Technically a script can avoid this but it'd requires drawing to another bitmap then transferring the rendered text to the real target bitmap where the text would be seen. It'd just lead to text cutoff instead though so IMO there's no reason to do the extra work and performance hit of a bitmap.blt call for something that's still a bug (strings too long))
unity

Close
07/08/2016 04:53 PM
Right! I'm already making sure to keep names, skills, items, weapons, armor etc somewhat short to keep that problem from happening ^_^ Names that didn't run out of room but still caused the text to shrink were driving me crazy. XD
Pages: 1
Forums :: Programming & Plugins
Back to Top