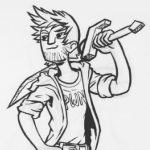 Close
02/09/2017 10:12 PM
so many people teaming up on zeuzio for having a confirmed weapon when we have no idea what the corn people were able to get
Irog

author=Bart_Sol
Alright, so that means that Irog, Natook and I are all the players who are currently in the lime zone

Close
02/09/2017 10:15 PM
So, did anybody want to reveal the name of the item they stole from me last night, and in so doing prove themselves to probably-not be the serial killer? Since I feel 75% safe assuming that the serial killer probably doesn't also have a theft power.
Blobofgoo

And yet we know that they didn't kill anyone last night. Wouldn't it be a fun little lark if the one who is hunting a serial killer in his anime was the SK here. In fact, now that I know that Zeuzio isn't in lime zone, potentially nailing the serial killer and maybe getting an item this time is to good to pass up.

Close
02/09/2017 10:18 PM
I don't know why you're all so keen to announce exactly where you plan on sleeping tonight to the serial killer, the guy with a ninja sword, and whoever got the cornucopia.
Zeuzio

Close
02/09/2017 10:21 PM
Jeez, my weapon is honestly pretty terrible and I'm gonna get killed over it. It can't kill anyone immediately and the target has to basically walk into it for it to trigger. I'm also not the serial killer. I'm the one who stole lockez's item. It was a one-use ability blocker.
Blobofgoo

Close
02/09/2017 10:24 PM
That means you're carrying at least 2 items Zeuzio. Looting your corpse might be worth it after all (if that's even something that occurs).
LockeZ

author=Blobofgoo
Are you sure it was stolen and not destroyed or swapped with someone else's?

No, but I sure as fuck acted like I was sure. The only way you could've known that was a possibility was if you did it.

So apparently Blobofgoo has an item destroying power. Good to know. That also means he's probably not the serial killer.
Natook
1000


author=Natook
exactly how do you know that the corn people didn't kill anyone last night?

because they were in the corn zone and not in the lime zone, where the death occured. also, corn crew.

twitchy as hell, was in lime zone, willing to go to make big logical leaps to put blame on anyone who wasn't in lime, when i feel like the natural reaction would be, "ok one of the other people in lime is probably a murderer"

continue to say what zone you were in
Frogge

Close
02/09/2017 10:32 PM
I don't really wanna kill zeuzio mainly because he could definetly help with his weapons. If he has an ability blocker like he claims, he might be able to block the sk by random chance.

Also, I gotta admit, this mafia is super fun.
pianotm

Natook
exactly how do you know that the corn people didn't kill anyone last night?

Because the death was in lime zone and we know everyone who was in lime zone. And also, being in the cornucopia was nothing like I expected. If anyone else's experience was like mine, it was a severe disappointment.
Zeuzio

Close
02/09/2017 10:33 PM
I wanted to try and partner with lockez tonight since I'd basically be able to prove my innocence and am pretty sure he's not the serial killer. (and to give his item back because I'm nice)

Why did I grab that sword lol
Blobofgoo

Close
02/09/2017 10:33 PM
I was just conjecturing. It seems like a very reasonable power in any game with heavy utilization of items.
Trihan

Players whose locations are currently unaccounted for are karins, psy, Delsin, Hexatona, Zeuzio, LockeZ and Blobofgoo. Obviously one of those is my ally and one of the others is demonlord's. The only zone in which we don't know at least one of the people is green.

We can pretty much confirm CAVE and pianotm's partnership as they both ended up in yellow, even though they've dissolved the partnership now.
Zeuzio

Close
02/09/2017 10:35 PM
#Sacrifice Natook, maybe I can live after all. I'd also like to reiterate that my weapon is pretty horrendous and would give it away freely if I could.