[RMVX ACE] [STEAM][ARTIST]DO I URGENTLY NEED AN ARTIST? COULD IT BE YOU?

From the feedback I get, it goes along the lines of a 'a love letter written in crayon'. 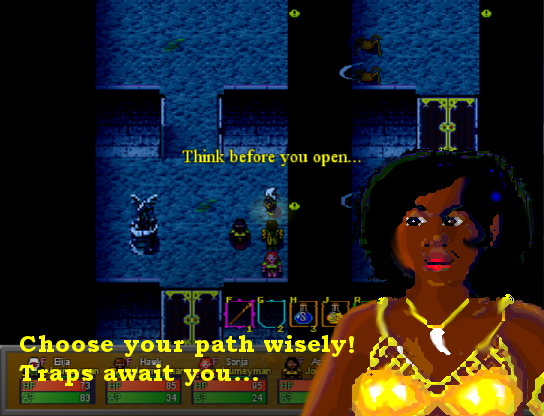 While I have received a lot of feedback and support from other communities, am finding it difficult to make this game attractive to the RPGM fans.

So here I am: looking for advice and potentially volunteers looking to get a credit on a released Steam game. Even if you cannot directly help, would love to hear what you think of the current art-style and happy to discuss why certain artistic choices were made.

Where should I go from here? Thanks for your time.
Marrend

Close
11/27/2017 04:21 PM
Hi, well the artwork I have is based heavily on Dungeon Master, but as a genre, it is a different beast of a game.
RPGM provides a cleaner, top-down approach.

My initial concern is that the art-style for my game feels conflicted, messy.

I guess this game should be made more appealing to the RPGM community: it should showcase how a different flavour of RPGM can be made, perhaps.

Otherwise, the user is left asking 'why was this made?' - it currently feels a little like it is falling between two stools, so am looking for advice, inspiration or even help.
suzy_cheesedreams

Close
11/28/2017 04:21 AM
It depends on a few different things, such as which audience you want to try to attract. People will play your game as is but more will probably play with more conventional, polished graphics. I am definitely not saying you should try to impress the 'mainstream' audience over others, just that there's always a separate group in everything to do with aesthetics that prefers conventional beauty.

The art style shouldn't have to completely change, but I think it could definitely be improved upon.

Another is definition - the busts look smudged, some of the shadowing is poorly rendered and colours bleed into each other, so the forms look sloppy. I think if you cleaned up some of the bits where the colour has been dragged out with what looks like a smudge tool (edit - forgot to write the rest of this sentence) and refined some of the shadowing, especially on faces (particularly Sonja & the blond dude in the lime green tunic), this would really help to overhaul the bust graphics.

Then there is colour. The colours you've chosen are bright and a bit gaudy, and there doesn't seem to be a consistent colour scheme throughout all the screenshots. I think because the hues of the colours are so strong, they clash considerably (especially Sonja's eyes, and her hair and outfit). Colour clashing can be a deliberate choice but most of the time it looks like the artist has an untrained eye for colour. To make the bust colours more harmonious you could try reducing the brightness of the yellow, red and green.

I like the menu busts a lot (except for Sonja, I think she needs a bit of work). They look pretty cool at that size. You could consider reducing the size of the busts in the other screenshots, because the shading and blockiness of the images looks better at a smaller scale than a larger one (to me).

I think with some more nuance they would be perfectly fine, and you wouldn't have to scrap them/get a different artist!
b0yflea

Close
11/28/2017 05:21 AM
Wonderful - thankyou for this. I did realise the phrase I should have posted was 'as a creative director, what would you change in my game' - as you've hit that mark completely.

I suspect I've not spent as much time or care on the artwork in order to deliver the core game, and I think it shows in places.

Palette and definition seem to be two strong takeaways form your observations - thankyou. I will see how I can improve on those areas.

Glad to hear that you feel it is not without redemption: it's difficult sometimws to gauge 'what good looks like' when you've been staring at it for an awful long time: thanks again! your feedback is invaluable!
suzy_cheesedreams


{EDIT}
posted a revised intro sequence and artwork... the shift in palette was a fantastic idea - and have added edges (though a bit flat) to pick-out the characters more... it's a more cohesive intro anyway, thanks for the inspiration! :)
Pages: 1
Forums :: The Job Board
Back to Top