NEED TO KNOW HOW TO "RESET" MY STEAL SYSTEM [RM2K3]

Close
01/07/2018 12:50 AM
What condition, etc, would I choose to make the switch for a successful steal be turned off so the steal command can be used again in the following battle?

Close
01/07/2018 01:14 AM
I'm guessing on the battle events page, you make a condition for when command "Steal" is used, and then probably for each enemy target:

if switch x is on
> message: nothing to steal
else
> message: stole something!
> add item something
> turn on switch x

Then have a global common event outside of battle that always turns all those switches off?
LordBlueRouge

author=MoonWolfV
What condition, etc, would I choose to make the switch for a successful steal be turned off so the steal command can be used again in the following battle?

It is probably one of the best Steal/Scan Tutorials because it's so easy to use and understand.

PepsiOtaku used it in his game Everlasting Journey.
I used it in my own game that I haven't released yet.

It's very simple: you can steal up to 8 monsters in battle - you can steal anything, money, items, etc - you can even steal multiple items from a monster, multiple times and set your own success rate of the item you're trying to steal.

I'll probably upload a gif later on and show ya what it looks like and maybe glance at it for the answer. But ya, for now, take a look at Aten's dbsm. it should answer most of your questions.
----
EDIT: I just took a quick look at my old game and the steal system I had in it. Similar to Aten's Template above - because you can have a maximum of 8 Enemies in it, You need to create 8 switches for each Enemy:

and then 8 switches for

But make sure at the beginning of every battle, make a "Turn count 0" Call Event and turn all 8 Stolen Switches OFF so the player can steal again in the next battle.


...But ya, You might have to do this in reverse order, because rpgmaker2003 works better with "else" condition handlers. 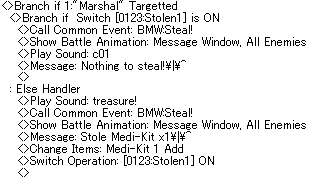 ...But yeah, I apologize for the over explaination, carefully take a look at Aten's dbsm template, he explains it better.

Let me know if this helped ❤
MoonWolfV

It works perfectly.
Pages: 1
Forums :: Help Me!
Back to Top