I...actually don't think I can even do anything to that menu. There was a DynRPG plugin that outright removed that menu, but I forget why I stopped using it. Other than that, I haven't seen anything that allows the user to mess with it. T-T
AubreyTheBard

author=Xenomic
And yeah, not much I can do about the being unable to choose actions while battle animations are playing, that's something that Cherry added into DynRPG. Similarly, can't do much about the ATB because of how Speed is determined in 2K3. T-T

EDIT - Thinking about it, the game never does say that it upgrades the shops after specific dungeons, does it?? That might be where the problem lies, hm...

Have you taken a look at PepsiOtaku's Battle ATB Overhaul plugin? There's an active/wait setting, although the wait version is often necessary for highly-custom battle systems like yours to prevent code from executing at the wrong time. There's also a setting in that plugin for changing the speed of the ATB system, so that's something you may actually be able to fix.
Xenomic

author=AubreyTheBard
Have you taken a look at PepsiOtaku's Battle ATB Overhaul plugin? There's an active/wait setting, although the wait version is often necessary for highly-custom battle systems like yours to prevent code from executing at the wrong time. There's also a setting in that plugin for changing the speed of the ATB system, so that's something you may actually be able to fix.

I have not, didn't even know it was a thing.
halibabica

from Xenomic
I...actually don't think I can even do anything to that menu. There was a DynRPG plugin that outright removed that menu, but I forget why I stopped using it. Other than that, I haven't seen anything that allows the user to mess with it. T-T


It has text fields, so they must exist somewhere. I don't have much experience getting fancy with 2k3, but I'm willing to bet you could find it if you dig deep enough. If not, oh well. I suggest you explore your options thoroughly.
halibabica 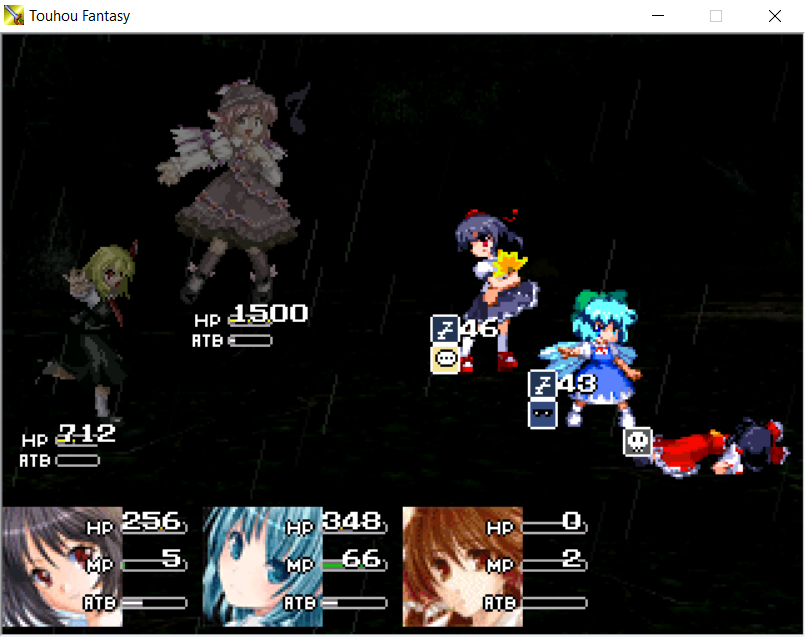 See, this is what I mean when I say my success depends more on RNG than anything else. Either I get lucky and status problems go my way, or I get unlucky and the fight becomes unwinnable. Freezing the bosses is too inconsistent to be reliable, and we don't have the stats to put out enough raw damage to out-heal Rumia, while also recovering from Mystia's barrage of statuses. This is not fun.

Like, it's one thing to have statuses that are significant enough to matter. It's another to have statuses that are so detrimental that you cannot succeed without removing them. The fight above is a total loss scenario. Even Cirno's one-off heal+cure everybody had already happened, so all I could do was wait 43 enemy turns to see if Cirno didn't die. I F12'd instead (and in the next five attempts as well).

Maybe it's just my own design philosophy, but I think status problems should be a reasonable inconvenience, not the make or break factor of a fight. Having to wait this long to wake up is not reasonable. Even 20 turns would be seriously pushing it. Then there are statuses that never wear off, like blind and silence. A blind, silenced character is totally useless until you cure them, and every curative is a separate item that all cost three times as much as this game's equivalent of a basic potion. It feels like the odds are stacked against me and all I can do is cross my fingers and hope it works out better.

I grinded one extra level onto each party member, and I'll give the fight another go next time. I don't want to grind any higher because that would take a long time with the experience these enemies give. If I've missed something obvious, I apologize, but this is driving me nuts.
Xenomic

Close
03/19/2019 03:48 PM
...I thought I fixed those status issues? I guess not, oops. @_@;; Those types of status levels are supposed to be for later on in the game, not at the beginning. If you want, I can fix that up real quick for you and send you the update for it?
halibabica

Close
03/19/2019 03:59 PM
Give me a few and I'll fix things up for ya. Might take a bit as I do have another thing that's running right now I need to get through before I can touch up on that. Don't know if you want to keep trying or not in the meantime. ^^;;
halibabica

Close
03/19/2019 04:30 PM
They were originally, but there was a time I was trying to fix things when I was redesigning bosses with Locke and others, and some things just always slipped past my radar (Mystia being the biggest one here as you can probably tell. She's MEANT to be pretty tough, but...well, not stupidly RNG like this, yeah...). And then there WILL be things that look like they're not supposed to be the way they are, but they are. So...yeah. There's that! ^^;;
CrawlingChaox

Close
03/20/2019 02:23 AM
Hey Hali, thanks for doing this!
Our game, Theia: the Crimson Eclipse, just released its international version here on RPGMaker.net and it's getting some buzz. It's a 2014 game made by LolloRocketDiver (a staple of the Italian RPG Maker Community) and translated by yours truly. Lollo is also one of the winners of this year's Indie Game Making Contest (with NecHroma). We'd appreciate any attention, 'cause Theia is an amateur project and the only reward we have is to see people playing it. :)
halibabica

author=halibabica
Welcome to the queue. ;3

Close
03/20/2019 03:48 PM
Okay...I dunno whether it was the one extra level up, the game update, or the status problems working out for me, but I finally managed to beat Rumia and Mystia. It seems several early-game enemies still have the brokenly-long sleep status. I got it from the forest shrooms and the mansion fairies as well. However, things are going much smoother now that Cirno has super powers that hit everything. Reimu still dies every ten seconds, though. I just can't seem to keep her up.
Xenomic

But hey! Congrats on beating those two at least! Guess I forgot to fix some statuses here and there, could've sworn I fixed the Sleep status (actually, that's probably one of those that's meant to be 50 turns. From Sirloin, yes? Though I could probably make it less than that for sure...).
halibabica

Close
03/20/2019 05:36 PM
Yes, it's from Sirloin. The fact it's 50 turns is partially offset by the fact that getting hit wakes them up, and common enemies use normal attacks more often. However, on bosses like those two, it's a much bigger problem. It'd be nice if there was a chance it could wear off on its own, but that's my opinion.
Xenomic

Close
03/21/2019 12:56 AM
Yeah, and status resists aren't very common that early on. At least not very affordable. As the game progresses, it does become easier to offset statuses at the very least. ^^;
halibabica

Close
03/24/2019 05:33 PM
Made it through another session of Touhou Fantasy. We managed to finish the Scarlet Devil Mansion against all odds. We got wiped a few times by some obnoxious stuff. Of particular ire was the big pink head thing that took little to no damage from every attack, which would be healed by its fairy maid companion if I didn't take extra measures to keep her down. Not being able to flee these touch encounters is kind of a pain in the ass when you're up against a monster that walls you.

Regardless, we fought our way to the heart of the mansion and whupped/recruited Patchouli, but not before she whupped us once first. I dunno if I missed the item that cures HP/MP drain, but those burdensome statuses only wore off when they were replaced by Death. :/
Pages: first prev 678910111213141516 next last
Forums :: What's Happening in Game Make & RMN
Back to Top