Close
08/14/2019 07:42 PM
Things continue to go better in TF; another grind, another boss down. I was relieved to see the surprise-second boss was weak to elements I was already packing from the one before it. We're onto the next story beat, which seems to be in hell even though the progression suggested some nonlinearity.

Anyway, bug report for Sanae: one of her random battle effects may be broken. It sends a bunch of hearts out of everyone at the battle start, and then all their sprites vanish. No clue if it has any other effect.
halibabica

Close
08/17/2019 03:45 PM
A'ight, continuing my way through TF, I did some running around to new events that are popping up as more and more party members feel homesick and leave. Our current agenda has led us to a big armored fella at Hakurei Shrine, so we're grinding up for that. I decided to do this at the Road of Reconsideration since the exp is good there and all the battles are single-target (though almost mini-bosses on their own).

However, I hit a little snag and decided to post this screenshot. Xeno, I want to see if you can tell me why this made me extremely unhappy before I explain it myself. 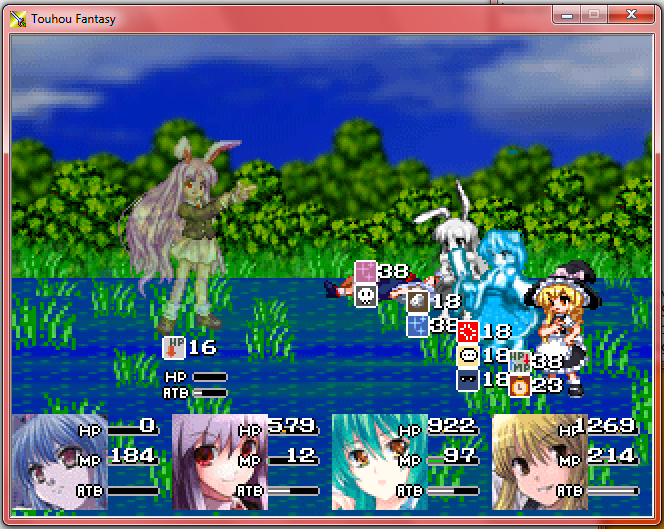 Close
08/17/2019 06:42 PM
Oh, I know why, because you essentially got hit by the Bad Breath equivalent of the game, which I thought I removed from that one since I believe I removed it from the actual boss fight with her earlier in the game...
halibabica

Close
08/17/2019 07:34 PM
Bingo! With one attack, she killed my first party member, petrified the second, froze the third, and stopped the fourth. She had twenty turns to do whatever she wanted before I could even try to do something about it. I decided it was faster to just reset.

However, it's comforting to hear she's not supposed to have this move anymore. This has been Party-Wide Crippling Statuses: A Cautionary Tale.
Xenomic

Close
08/17/2019 07:44 PM
Actually, did the original boss fight with Reisen have the move at all?? Document says she does, but it also states that it reduces stats only, not inflict statuses, so unless this document is outdated (which it obviously is, it has Mirror Reisen listed as using it, but as the same as boss Reisen)...@_@;

Though I also could've lost the most recent version of it at some point in time and not known about it, who knows! I think I remember this happening with the Bio Reisens too when I played the game...
halibabica

Close
08/17/2019 07:51 PM
I don't know if the original boss Reisen had it. She hasn't used it in any fights since, so I think it's probably a rare move (which would make sense). I'd just double-check and make sure because there's nothing fun about that.
Xenomic

Close
08/20/2019 09:18 AM
This thread should have more screenshots. Of bad AND good stuff. I like the screenshots.
halibabica

Close
08/20/2019 09:01 PM
You're right, I kinda fell out of taking them. The trouble now is that I mostly play on my break at work where I can't use the internet for personal use. Also, the default image editing program is Paint 3D no matter how many times I set it, so getting the pics is an extra pain in the ass. But I'll try to do them when I have the chance.

Close
08/23/2019 06:20 PM
I got through Yuuka's personal section by the skin of my teeth. The last boss' Poltergeist attack did stupid amounts of damage at times. Maybe I don't get how it works, but it ranged from as low as 200 to as high as 1300. Unless there's armor you can wear to guard against that, I don't see how a lower-level or unleveled Yuuka could ever tank that. The fight was tedious in general, especially for a single combatant, so maybe consider nerfing that.

Also, I've been meaning to ask what's the deal with the Mystery Veil? It cancels out it's own benefits with the statuses it induces, and they can't even be lifted by other equipment. I don't see the use.

Also also, I need to complain about the icy-looking hellspawn in the ice cavern. It's probably a notorious monster, but it already ended my run three times, the third of which it led the fight with Black Hole and wiped out my entire party at full health. Xeno, what the actual fuck.

And I need to extend this complaint to the Alice fight at the end of the area. How the hell are you supposed to win this? I get how the fight works. You can only damage the boss when the Defense Doll is down. The boss can only attack when the SP Dolls are up. Keep up with all the dolls and you eventually win. Well, unless the Defense Doll has some weakness I'm unaware of, it's impossible to kill it quickly enough. She can try to re-summon it while it's still out, which causes it to get back all its HP the moment it's depleted. The doll takes so long to destroy that you get little or no window to actually damage the boss. Slowing the boss is a good idea, but it pushes her HP bar below the character portraits, so you can't even tell if you're making progress. The party and equipment are fixed, so if I'm missing something, please tell me. This fight is actually fucked.
Xenomic

Close
08/23/2019 07:04 PM
Yeah, I remember Poltergeist being a rough attack. It's a Ghost-type attack, so anything that protects against Ghost damage, like Netherworld Ribbon or Netherworld Dress, or those things, will halve the damage it does. The fight was revamped quite a few times, it's honestly really hard to come up with an interesting 1v1 fight, especially slow Yuuka and her very limited skillset. x_x;

Mystery Veil is...a weird thing. Silence does screw a lot of character, and Blind screws with regular attacks, but it doesn't screw physical skills IIRC (because accuracy modifiers from statuses don't apply to skills IIRC?? Someone with more knowledge of 2k3 mechanics can clarify that). So it's more used with someone like say...Youmu or Remilia who uses purely physical based skills. Otherwise, it's...well, not super great, to be honest.

...Oh. So that's where Krysta is. Yeah, that ice cave is full of Notorious Monsters from past areas of the game. Krysta ORIGINALLY was in Poltergeist Mansion, but got removed IIRC. Seems I never removed it outright because of how dumb it is...

Wait, is she still doing that?? She's...she's not supposed to be trying to revive anything when it's alive. That was a problem originally with the fight. I will have to look into it, since it's SUPPOSED to be if the doll is dead, then she's supposed to revive it within 60 turns. Something's very screwy with the coding there....ffffff!!!!


EDIT - Yup, can you guess what's wrong with the coding? EDIT - It has been updated and uploaded, if you wish to get it. Krysta has been outright removed from the game (apparently it was still in Poltergeist Mansion!?), and Alice SHOULD be fixed now (the timer should now be set to -4 if the doll is dead, THAT is what the problem was...it was still counting down the timer so that it would trigger the activation for the revive even if it wasn't dead).
halibabica

Close
08/23/2019 07:52 PM
All right, I'll nab the update before the next time I play. Hopefully it will be more doable, but tbh these dolls are tanky as hell and tedious to chew through.

If Krysta was in the mansion, I never saw it. Maybe it was on another floor or something; I only fought in the foyer. It became less of a problem after a couple level-ups, but it seemed like RNG played a role in its lethality.
Xenomic

Close
08/23/2019 07:59 PM
Yeah, that's one of the things about dolls in general, if you noticed from the mansion. They're meant to be super tanky, but the Defense Dolls are SUPER tanky (because well...they're Defense Dolls).

Krysta only appeared in the basement area that had enemies, and was rarely there. You didn't even get to SEE the other part of its dangerousness:


Yeah, Krysta was a tad TOO much methinks...
halibabica

Close
08/23/2019 08:12 PM
Well, it does make sense for a thing called a Defense Doll to be extra durable, but since it's only action is defend, that just makes it even tankier, doesn't it? Unless that doesn't affect magic damage, but I'm pretty sure it does.

Please remove any abilities of notorious monsters that can party wipe in a single turn. Goodbye Krysta, you and your desperation Ultima will not be missed.
Xenomic

Close
08/23/2019 09:35 PM
I mean, it depends on the point of it all. What function does an enemy who just defends add to the combat aside from taking time to chew through it? Does the defending synergize with any other monsters in the battles somehow? Otherwise I just don't understand it.
Xenomic

Close
08/23/2019 10:32 PM
Yeah, looking at it, it has 10000 HP with normal resists to everything but Earth (which you don't have access to in that fight anyways), takes 50% from Magic, and Defend halves all damage it takes. So yeah, it's just there to make it so that you have to kill it first BEFORE you can even think of damaging Alice (the main boss). Have you tried using Nazrin's Haste spell, by any chance? Though obviously that won't help with the previous bad coding...
halibabica

Close
08/25/2019 08:59 AM
It's not reasonable. But I already bitched about it for five solid hours of real time over Skype and he didn't change it. All of the Alice fights are interesting but just take twenty times longer than they need to take.

When I was testing the game, that boss was the first point where I got angry enough that I actually just went into the editor and cheated, giving the boss 1 HP.
Pages: first prev 1415161718192021222324 next last
Forums :: What's Happening in Game Make & RMN
Back to Top