Close
08/27/2019 10:33 AM
Based on google results, the shigunichi error is caused by a faulty map tree, or by being sent to a map that doesn't exist. Since redownloading fixed the problem, my best guess is that you had a weird combination of two different versions of the game somehow.
halibabica

Close
08/27/2019 05:32 PM
Seeing how I copy over versions with flagrant disregard for data integrity, that makes a lot of sense.

I replaced all but my saves to get it working again, but in doing so, removed the RTP from the jump drive I play off of. Welp, no Touhou today. >_<
halibabica

However, once that's through, I plan to go hardball on Touhou Fantasy and see it to the end more expediently than my normal schedule would allow. We'll see how it goes, but that won't be until after 9/22. See you then. :3
halibabica 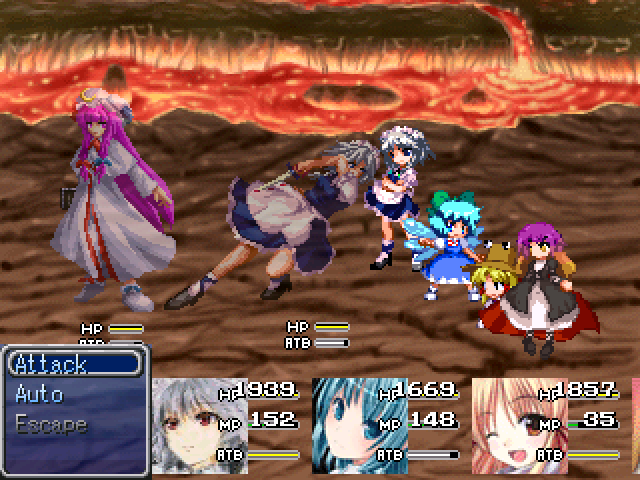 So, I'm back on the horse, finally. I hadn't wanted to take such a long break, but it was necessary to get my DDLC fan sequel demo out in time for that game's anniversary. Now I'll be focusing on Touhou Fantasy until this game's kaput!

I've found my new favorite training spot in the above cavern. If you can handle the monsters there, it's quite profitable. Now if only Aya were back from her plot vacation, I'd be all set. Incidentally, a consumable item that can perform her scan function would be most welcome.
Xenomic

Close
09/27/2019 10:16 AM
Honestly, you could put it at the bottom of the item array and it would still be worth it to scroll down to when she's not around.
Xenomic

Close
09/28/2019 02:36 PM
So, the more I'm thinking about it today, the more I feel that the one aspect of the game I WANTED to accomplish, I don't know if I accomplish. Well, two rather: A concise and appealing story, which I don't think the story really is until 50% of the way through, and bosses being a bit more of a puzzle fight than anything, which I think SOME work well enough as, but a lot of others don't. >_<

Also, is that...the Cave to Makai?? I can only assume that's the cave you're at? o.o??
halibabica

Anyway...the story is hard for me to comment on because I don't know enough about Touhou. I'm unfamiliar with the characters and plot(s?) that this game is based on, so a lot of the significance is going over my head. In particular, this rampant amnesia everyone's having suggests to me they're referencing another game I haven't played, so I'm as lost as the hero party and starved for answers.

The combat has had a few puzzle-y bosses, but most of the time, exploiting weaknesses has worked best, and being high enough level not to die in two hits.

So...I'm not sure it's succeeded on either front. It's tough to balance with how many options are available, and while it's been rough around the edges, it hasn't all been bad.
Xenomic

Ah...well, I'll keep the story bits to myself for now, let you go through the game and see what you come up with. Ironically, the first half of the game is kinda split up between two games in a way (i.e. beta1's entire segment, from start of game up until right before the Underschool is th6 and th8, while beta2's entire segment, from Underschool up until after final Eientei, is th7 and th10). Kinda combined two games into each beta, but very loosely, may I add, as the plots for the games aren't...well...very major. ^^;;

Yeah, that's where I regret having as many playable characters as I did, but axing ANY of them out just...wouldn't have worked well storywise since they're all kinda semi-important to the plot one way or another. And we don't REALLY want another FFIV situation, do we? ^^;;
halibabica

Close
09/29/2019 11:11 PM
Incidentally, the enormous size of the playable cast is another reason I advocate for boss EXP, because even a little boost would help all these characters keep up with each other.

Anyway, I think Fate's gimmick might be broken. I just solo'd her fight with Sakuya, whose Star Sword was unaffected by her elemental weakness shifts. It was kinda satisfying to do, though. Also Aya's back now yaaaaay.
Xenomic

Close
09/30/2019 12:02 AM
Yeah, you can try to deal with the elemental gimmick, or just go all non-elemental against her. She's not an undead skeleton or the great Magus, she's just a small girl after all. She wouldn't be immune to non-elemental stuff~ Though interesting to hear that you solo'd with Sakuya. I'd assume that you didn't actually do it with JUST Sakuya, since there's no way she'd be able to take all the damage that Fate can dish out? Also huh, none of the other bosses gave you trouble, eh?
halibabica

Close
09/30/2019 01:38 AM
Without Aya to tell me their levels, I've just been picking up a couple levels on each of my lowest party members and winging it. The group that fought the pre-Fate boss was L37. No clue what's appropriate for the challenge intended.

Sakuya was all by herself with her speed maxed, and I used Private Square to get four times as many turns. She had plenty of time to maintain herself between Star Sword barrages.
Xenomic

Close
09/30/2019 03:44 AM
Yeah, with no info to base my strats on, I just caught up all the low people. Aya's the lowest at 27 just because of her away time. It's been good for funding, too. I've been buying extremely expensive Dead River equipment.

Actually, I needed to ask: what does the Cold Aura weapon do for Cirno? It has no description and doesn't raise her stats at all.
Xenomic

Close
09/30/2019 03:46 AM
It's just a weapon for her so she can actually use her skills. Otherwise, with no weapon equipped, you can't use any skills due to how attributes are handled.
halibabica

Going to this cave early leaves you hopelessly stuck because the event doesn't trigger and there are no exits to the room: 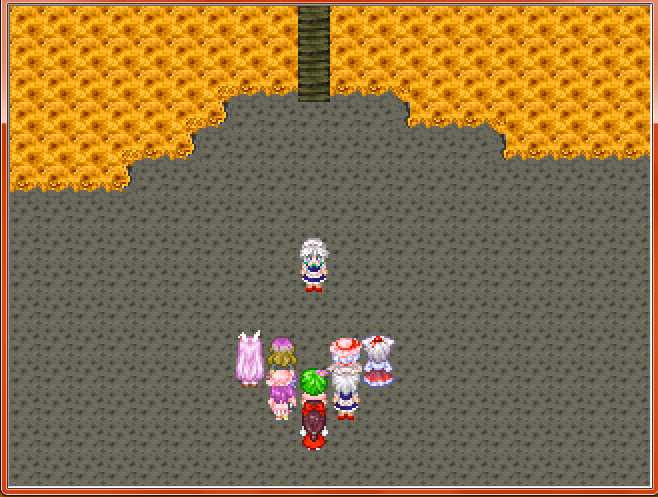 So, now I'm up against this mech-lookin' guy who thinks it's cool to electrocute the party every few seconds. I don't know how you're supposed to beat this at minimum level, but I have a few ideas I'll try before complaining about it too much. For now, I just need to ask: does anyone learn Gravity attacks before this point? There was another boss that was "super-weak" to Gravity when no one actually has it. Maybe there are items that can cast them, but I've seen no party members with them at all.
Xenomic

Close
10/01/2019 03:25 AM
There's only one optional party member that has it. Honestly, Gravity as an element was a very late introduction that...really never went anywhere. Also, that's...weird. Did you go there early? Or did you go there when you were meant to go there??
halibabica

Close
10/01/2019 03:32 AM
I went as deep into the Makai world map as I could on my first arrival. There was no direction on where to go first, so I explored my options and got stuck.

Also I guess I missed an optional party member somewhere, unless they're only available beyond this point, which would be rather silly.
Pages: first prev 1617181920212223242526 next last
Forums :: What's Happening in Game Make & RMN
Back to Top