Close
10/25/2019 10:16 AM
It might be too big to track down every instance of a needed speed change, but one well-placed piece of code would solve this handily. You already have a hub in place for switching the party around. If you put in a line at the start and end of that section that resets the hero walk speed, that would be all you need.

I mentioned this ages ago. If you create a move event that maxes the hero walk speed, then reduces it by 2, then you're at default walk speed no matter how fast or slow you were before. Make that part of the HRCS warp event, add some lines that compensate for Sakuya joining and the party reset spirit, and you're done. Old man Xenomic is out of a job.
Xenomic

Close
10/25/2019 04:11 PM
I mean, that's for using the HRCS system, which it already does that there for the most part (just I forgot about the maxing Hero Speed and then reducing it to whatever I need it to be...). For cutscenes, that...wouldn't be as viable unfortunately. ^^;
halibabica

Close
11/01/2019 11:18 PM
Yes, I'm still playing TF. We just stopped Shinki from making a big mistake and now we're going after...someone, somewhere. I've honestly lost track of all the villains, where they are, and what they're doing.

In the meantime, we beat up the big Yokai lady who squashed the human village. Apparently she went to "the mountain" which was a very accurate and helpful description of where to find her now.{/sarcasm}

When I went to the only mountain I know of, I found this: 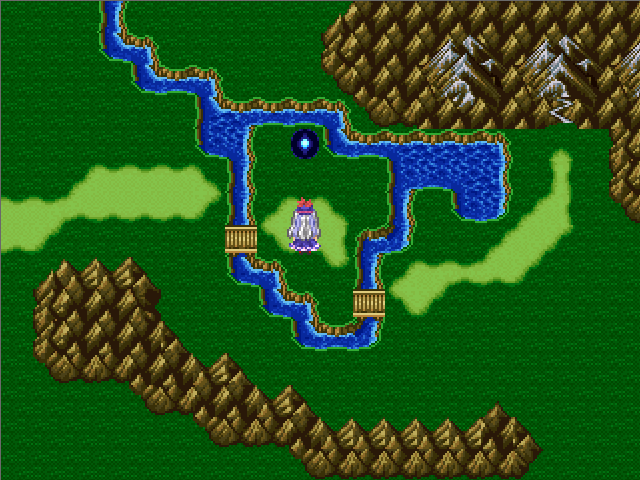 But the event that started when I entered there seemed like it wasn't on my current story beat, so I F12'd outta there. I'm supposed to be looking for a cave anyway.

Also, I found a new bug. I can't upgrade Moriya's Iron Ring to Lv4, even though I already know it at Lv3.
Xenomic

Close
11/01/2019 11:35 PM
After Shinki...after Shinki...oh, I think I know what you need to do now. Do you remember how before I mentioned the switch puzzle cave you didn't have to go through to get to Fallen Shrine? Well, that's the one you take to go to Silent Shrine now. No, not the super easy one, the one that's going to make you go oh no probably!

Yeeeeah, you're not normally meant to beat Suika until late, so you opened up a thing that would be for endgame hue. I guess I could put another trigger for that event, but then people will probably forget about why that's even there to begin with. I dunno. But yeah, I honestly don't even remember the dialogue for when you beat her, I probably should take a look at that.

Huh...that's a weird bug. I know there were some others like that I fixed before, but not sure how that one slipped through. Though again...I never used Suwako so maybe that's why I never saw it. *Ponders*
halibabica

from Xenomic
Though again...I never used Suwako so maybe that's why I never saw it. *Ponders*

So the event was intentional, I just beat her earlier than I was supposed to? All righty, then. Perhaps I'll confront that after I deal with Sariel or something. I found and got through the switch cave with all the tanks, and now Shinki decided it's better to work with us than against us, even though 90% of the party is sitting this out anyway.
Xenomic

Close
11/02/2019 01:24 AM
Yeah, you beat her much earlier, mostly because you're level 99 at the point in the game where I expect players to be maybe level 40-50. ^^;; It is for after the whole ordeal with Sariel, that's when all those portal events are meant to show up actually.

I don't know if I should be proud of how I handled that cave or not. It was quite a pain in the butt to code things properly, that's for sure...
halibabica

author=Xenomic
Yeah, you beat her much earlier, mostly because you're level 99 at the point in the game where I expect players to be maybe level 40-50. ^^;;


About that, I only used one L99 character in the party, and that was Koishi (and I'm glad I did 'cuz she got a cool move out of it). The rest were around L50, so it was mostly a fair fight.

Anyway, if you're going to tie a plot event to the defeat of an enemy that shows up as early as the Remains of Hell, you'll definitely want to reconsider it since she can be defeated early. In fact, if your claim were true that no leveling is required to beat this game, then you would've known that'd be an issue anyway. Just sayin'.
Xenomic

Close
11/02/2019 03:26 AM
That's why I didn't bother changing it because I figured a level 50-70 party would be more than enough (which I guess you proved that by doing just that, bar the level 99 character). Defeating her any earlier than Cave to Makai, I just don't see happening unless the player power grinds hard, especially since she'd probably outspeed the party at that party still (not to mention, dealing with the massive mitigation she puts on herself as well as damage boosts on her own moves might be too hard at that stage in the game? Not sure).
Illy

How big is it??
halibabica

from Illy
How big is it??

Apparently, it took the game's creator 80 hours to get through it, and I assume they took the path of least resistance.

I'm at about 110 hours now, but this is mostly my fault. The smart thing to do would've been to stick with the same four Touhous and only level them up, but instead, I'm exploring every character and all their possibilities. That's why I'm finding all these bugs related to characters Xeno never used (bad Xeno, hsss) and also why this is taking 300 years to get through. Upgrading everyone's skills takes an hour by itself because the method is so clunky. I'm still tempted to help make a custom menu for this because it's just that unforgivably bad.

Now, what I ought to do is steamroll everything with a party of all 99's and call it a day, but I'm still mostly using my least-leveled people out of some delusional desire to keep it "fair." I probably could've written this review seven months ago.
Xenomic 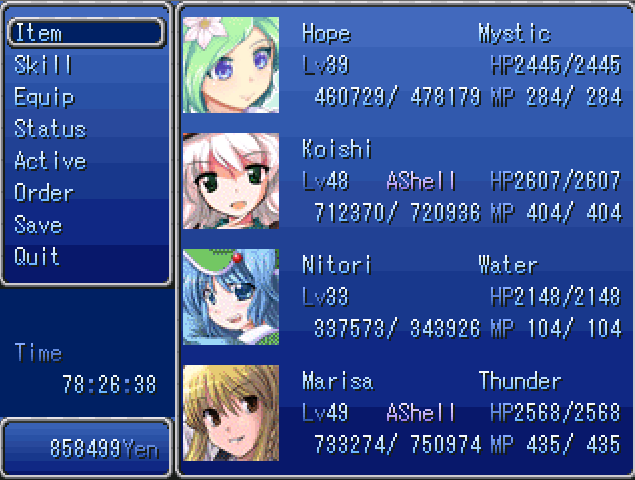 Yeah, that's roughly what my final file looked like, if you're curious.

EDIT - Yeah, everything from level 4 onwards with Iron Ring was using the wrong Conditional Trigger...that's all fixed now, but unless you're really caring to use Suwako, that shouldn't be a problem in particular for you.
halibabica

Close
11/02/2019 03:37 PM
Why aren't they level one That's interesting to see, though I also wonder what level the other party members ended up at. There are enough places in the game that force you to use everybody that you can't really neglect them for too long.

Also, with you knowing where I am in the plot, how much further is there to go? We've hit most locations on the map at this point...
Xenomic

Here's the thing, if you DON'T use specific characters that the game forces you to use (i.e. Sakuya), the game WILL auto-level them up (in some cases, like Sakuya, at least to level 20-30), if they're not already at those levels. I made sure to put that in place so that you didn't get stuck with a level 7 Marisa fighting solo lol....though I don't know if it accounts for some sections such as the abovementioned one.

Well, you're actually at endgame territory now. After getting Shinki, that's where you get to the final stretch of the game. You're nearly there! That IS what happened last, right??
halibabica

from Xenomic
Well, you're actually at endgame territory now. After getting Shinki, that's where you get to the final stretch of the game. You're nearly there! That IS what happened last, right??


Shinki hasn't officially joined yet, but she and a few others are about to help Byakuren do her thing. It's encouraging to know we're almost there!

Since I've been keeping up their levels on my own, I was unaware that auto-leveling took place at key segments. That certainly helps, though I suppose I'll never know how much...
Xenomic

The key thing there is how much you kept up with their skills I suppose. For example, do you remember the Yumeko fight? Did you know she's weak to Slow AND Stop? Yes, Sakuya's Slow/Stop abilities are actually VIABLE. Much like how Marisa's Steal command can help deal with her solo fight (kinda??). Also equipment, because that always matters.
halibabica

Because of my demon wall shenanigans, I've kept up with almost everyone's skills. The only ones I haven't bought are a few for the bonus characters, and I might have enough after the Shinki incident to buy the rest. I already bought all the equipment available to me, so we're ready to roll. All the more I'd want is an Optimize button, except that's probably impossible in 2k3.

I gave up on inflicting status problems after a while because they're totally inscrutable and I see them fail regularly against normal enemies, let alone bosses. The only one I ever use is Private Square since that guarantees slow and I can cure it off the party if I plan for it.
halibabica

Close
11/08/2019 04:57 AM
Seems like I'm getting very close now! I made it through the Hokkai dungeon, teamed up with villains A & B, beat villains C & D, fought villain E before villain F absorbed them, then villain D pulled herself together and rejoined the party to help us beat villain F, and now all that’s left is to stop villain G residing within villain A. Progress!

Also, I've dubbed Chaos as "Keine 2" since her fixed damage spell is even more broken on high-level targets (and half the MP cost).
Xenomic

Close
11/08/2019 05:27 AM
Yeah, the amount of antagonists kinda makes it hard to follow the story. Kinda wish I didn't go that route, but what can ya do now, right? I never used Chaos much myself either, so can't say how dumb she is.

Fun Fact: Flare Star (which I'm assuming is what you're referring to) was ORIGINALLY a Blue Magic spell. Which could be learned almost immediately upon getting Koishi. So you can guess why I moved it to someone so late in the game. ^^;
halibabica

Close
11/08/2019 06:09 AM
I picked the lowest-level party I could for that dungeon, which meant babysitting L20 Lunasa, but for as limited as she is, she's actually a really good support character. She had no trouble putting most common enemies to sleep, and Chaos' Flare Star didn't wake them up. I'm surprised I didn't have more trouble, especially since all the party members had fixed equipment.