Close
10/05/2019 10:36 PM
I'm very much aware of testing things, considering how many times I've done iiiiiit. I even made note of doing so about that fight (since that's the only time you get to use him IIRC, so no point in having him even there). If there's any other points after that, well...
halibabica

But I do know this kind of thing can be tricky for one person to check, especially the main developer. Players may think to try things that were never intended, so they're more likely to catch stuff that the creator wouldn't since they do everything the correct way. If you can find someone who's willing to help you comb the game, it'd definitely be worthwhile.
Xenomic

Close
10/05/2019 11:01 PM
Yeah, things like with Keine for example lol. That's probably leftover code from the original Keine fight, which...well...Keine herself couldn't be used at all, and thus I never thought of removing the coding Hakutaku after I removed it or something. @_@;
halibabica

Close
10/08/2019 02:54 AM
Continuing my long haul through this game, I finally gave up on my little notepad and started making a spreadsheet to track my skills 'n stuff. I'm jotting down notes of the effects skills have, and I needed to ask...is there a difference between Shadow and Dark? I wasn't sure if they were meant to be the same element or not.

Close
10/08/2019 03:06 AM
Yes, Shadow and Dark are the same thing. Was there some descriptions that are still using Shadow instead of Dark??

I'm still very iffy on the Gloom fight personally. It's so hard to make actually good 1v1 fights, and that one I think might be too annoying, perhaps? It has an interesting gimmick, sure, but I dunno. It's kinda like the Yuuka segment fights, I suppose?
halibabica

I think the trick to 1v1 fights is making them more like puzzles than battles. It should explore the singular character's move set so the player sees how their skills are best applied. Too bad Yuuka has nothing going for her and Hope has too many options.

Yes, some descriptions still say Shadow. Good to hear there's no real difference. I also saw an enemy with a weakness to "Spirit" which I'm guessing was supposed to be Ghost.
Xenomic

Close
10/08/2019 03:57 AM
Yeah, Yuuka's was really hard to do anything with since she's so limited. Hope does have a lot, but the thing with her fight is that the Mirror actually will use the OPPOSITE skillset of whatever Hope is currently using. So if Hope's using her default skillset, the mirror will use Fate's, and vice-versa. Gloom just does whatever she wants in the meantime. And in THAT fight, since it's JUST those 3, Wall and Starlight Barrier last a loooot longer than usual, heh. I don't remember if the Mirror has Dispel or not though.

Ack...I knew I'd forget to change some things in regards to Shadow > Dark and Spirit > Ghost (Dark was to save on description space...).
halibabica

Close
10/08/2019 10:03 AM
Oh, that is a pretty cool gimmick! I didn't really notice since I didn't change skill sets at any point. I could see that being tricky if I tried to use her healing skills instead of depending on items. That might have worked better in a multi-person battle where the damage doesn't have to be mitigated by one single person.
halibabica

I had meant to ask what the heck this was about: 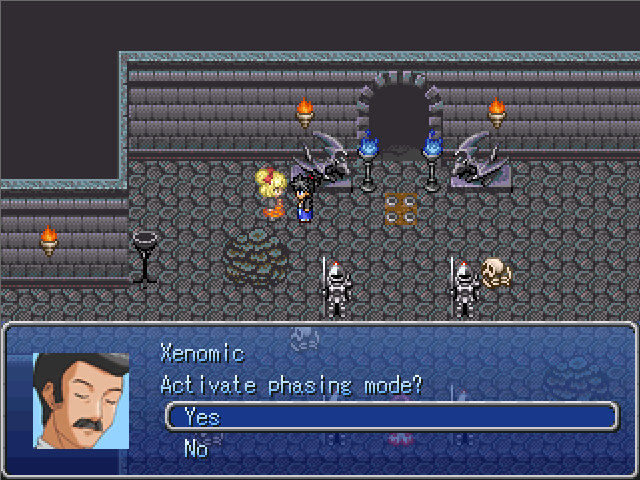 But I'm actually well beyond that point now. I just beat Gilgamesh, and I don't know what the intended way of defeating him was since his NulAll spell works as stated. Luckily, Keine's moves don't give a crap about anything, so he was done for after a long history lesson. Maybe I was supposed to know his gimmick from some FF game I haven't played or whatever, but I don't see the point in him being "very weak" to poison when he's just immune to everything forever anyway.

But hey, we're about to have our third crystal, so that's something. I haven't had to grind for a bit; I've just been coasting on my existing levels and abusing Keine's busted XP share mechanic to wring level-ups out of bosses. Yes, I still think 0 XP bosses are dumb, especially in a game like this, and I'm so not sorry getting 8-10 level-ups across the group just for using a character with high, irresistible damage.
Xenomic

Close
10/18/2019 09:59 PM
Hey, old man Xenomic, I thought you were removed in all instances?? Guess I missed that one somehow??? Ffff...that was a debug thing for myself for testing things faster, guess he slipped past the radar.

Yeah, NulAll nullifies all ELEMENTAL damage only, so non-elemental attacks would work fine. Otherwise, when NulAll wears off, he's gonna eat stuff pretty hard (though Poison is a rare element anyways sadly...). Greg there can be pretty scary I think, in both phases of the fight. Ultimate Illusion is rough. x_x;

I do think that the 2nd half of the game is a loooot better than the first, and will always think it is. Probably because story is actually able to be more concise without jumping from area to area wandering about aimlessly, and characters are actually getting plot, and the characters that SHOULD have been important the whole game are actually being a bit more important now (yes, I'm staring at you, Hope!).

You're probably one of the very few that I know to use Keine at all lol. Most people won't use her because they don't understand her gimmick, or hate her low accuracy (most of her moves have 70-80% accuracy, and in RPG Maker...that's usually less than what it seems it feels).
LockeZ

Close
10/18/2019 11:11 PM
Well, it doesn't matter whether it's hard-coded or affected by wonky evasion. I got the armor that makes history moves never miss. All I need is a shop that sells F's and this game is boned.
Xenomic

Close
10/18/2019 11:12 PM
Oh lol. Was that armor a drop or findable, I don't remember. I honestly thought of making it halve the power of History commands, but decided not to (luckily, Fs can never be bought, heh. I thought of that one!).
halibabica

from Xenomic
Fs can never be bought

Darn. I'll just have to settle for how broken she already is. If I remember right, the armor was the reward for clearing out the fairies in that guy's house in the human village. That was a lot more doable when I wasn't level 2.

Anyway...I'm in the middle of this extremely long cutscene that is actually making me wonder if it was intentional. It started when I went through a door in Makai. Marisa was chasing a thief, and we had a fake fight she bailed on. Then everyone went to bed, Hope was awakened the next day, and now...it's just wire-to-wire cutscenes skipping dungeons and bosses and everything. Did something break?
Xenomic

Umm....what?? That doesn't sound right...can you show what's going on?? Because after she wakes up, it's supposed to move on from there to the next spot I thought...was the last place Frozen Field?? Or is it all in flashbacks, because there's a massive cutscene that's all flashbacks of a dungeon.
halibabica 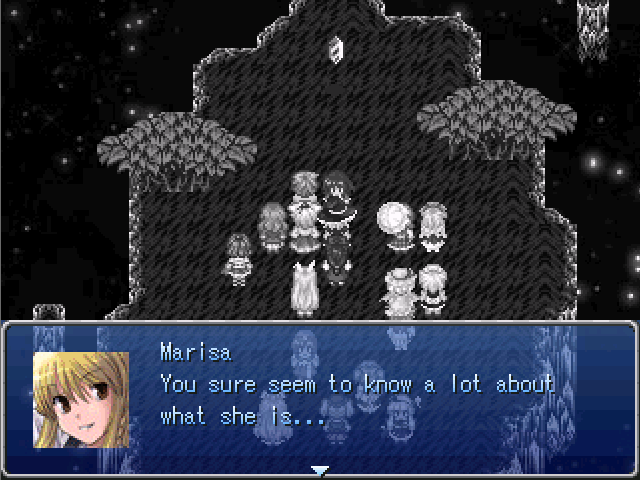 The screen has had this filter the whole time, the music has been the same song, and it's been scene after scene from Elis' trap to Chaos to the crystal dimension and here.

Is this because I turned phasing mode on?
Xenomic

Close
10/19/2019 12:40 AM
If it's that filter, that's a flashback, so that's perfectly fine. I feel like that's a part I could trim out, it's actually the entirety of the Ruins of Vina dungeon that was going to be in, but got removed, but the scenes were kinda important (as you may have seen SOME of), but not ALL of them needed to be seen honestly. The phasing mode might be an issue in later parts of the game though if you still have it on...
halibabica

Close
10/19/2019 12:44 AM
Be thankful that at least you didn't have to PLAY it. I actually playtested it, and it was too long for even me. 3 hours that entire thing was...I was like "lol nope...already have long enough crap, don't need more". Granted, I hated dummying it out since piano helped with it...but there was no feasible way to make that short at all sadly. All those scenes? That's literally every cutscene in the area at various points, so yeah...take that as you will as to how massive it was (this is INCLUDING the dimensional rift area that you screenshotted as well). @_@;
Pages: first prev 1819202122232425262728 next last
Forums :: What's Happening in Game Make & RMN
Back to Top