No worries, kory. I'm a ruin too. On the hill opposing yours, we're sitting, fields are almost like we're holding hands.
InfectionFiles

This sounds quite like insulting title. There a nothing funny in being scared by lawsuits. Must be free of this fear!

This sounds quite like insulting title. There a nothing funny in being scared by lawsuits. Must be free of this fear!

You gotta click that Nominate button on the gamepage bro
Cap_H

Close
12/23/2018 05:28 PM
We should round up interesting games somehow. One method would be to throw around random names of games and make a list of interesting releases or work hard on Misao (Im)possibles. I'm sure I could make one or two months.
Sooz

Close
12/23/2018 09:40 PM
I mean that was originally the idea here but for all that we bitch about the selection at the Misaos, nobody really seems all that interested in discussing games outside the game pages. So I guess we get the awards we deserve!
Darken

Close
12/25/2018 01:12 PM
my xmas morning hasn't started yet but i just wanted to say nominate final fantasy vs dog for all categories
Cap_H

Close
12/25/2018 01:42 PM
Seeing Darken's post here, I would like to say that his two late games Nemoral and Kryopolis are both worth checking.

After making a little research, the two most notable rmn non-commercial releases of 2018 are
Fire Rmnblem
Dyhalto finally released a proper game and its something to talk about. To make it even better the game includes many members of this community and makes for one of the best community games we got.

Aria's Story
A highly polished horror game, which got featured here and on itch.io. Devs can use their resources and the game itself works well with fairly known grounds of the genre.

Both of these got featured already. I think it's a pretty good indicator of their qualities.
Also Momeka's Grimps 2 got released and featured in 2018.
Darken

Close
12/26/2018 03:29 AM
Dirge of Doningoth is also really good! Do not be fooled by the RTP or the oldschool RPG comedy, there's a kickass dungeon in it with a gimmick that would be for an entire game.

Off the Table Pretty small game but easy pick for "First Game" category for me. Good aesthetic too.
Aegix_Drakan

That being said, I'll nominate it, it was a beautiful retro throwback and I seriously appreciate that. :)

I TOTALLY need to play that. I forget why I never got around to it, I hear nothing but good things!
LordBlueRouge

Eldritch Law, Nightblade's remake to Demon Legacy, had a great demo, with a really innovative game mechanic this year.

Grimps 2: probably the best looking arcade puzzle game made in RM2003, this year.

Jimmy and the Pulsating Mass had a really solid commercial release this year. It's not eligible for the misaos.
But it's worth mentioning because it was something that happened this year,
and I'm seeing it show up on couple of places outside of RMN.

Dirge of Doningoth does have a really cool dungeon that's worth checking out!
I made a post about it and included a save file so other people can quickly try it out.
Hopefully it'll go through before nominations close: 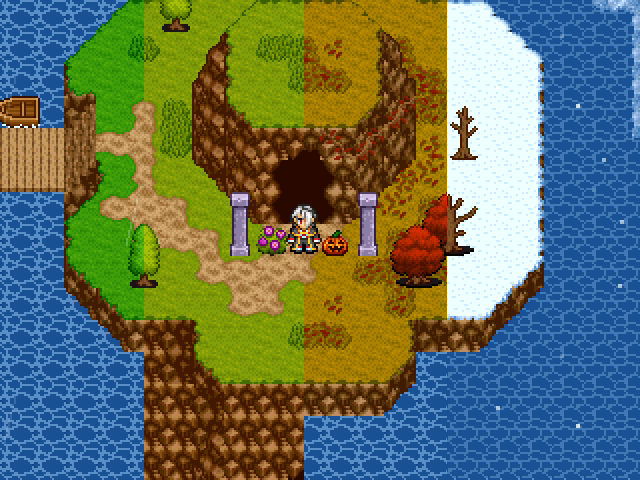 Darken mentioned this game had a really cool dungeon with a gimmick that would be for an entire game.
So I tried it...

...and I absolutely agree! This kicks so much ass!

For those curious here's a save file that jumps you straight to the Seasonal Dungeon in Dirge of Doningoth.
(Just enter the cave and talk to the Elf girl)

My favorite part - I think - is when you have to get the Watering Can from the Farmer in Autumn, so you can use it on the Tree Seed in Spring. So that, when you return to autumn again, you'll have a fully grown tree that you can finally climb to your next destination -- This was really well done, congrats Sidewinder! This one dungeon could be an entire game in itself.

Everyone, please check this out.

Also worth noting the Top 10 for the IGMC have been announced. Also People's Choice results are in. Creaptive Heart taking the first. Some of these games may or may not be in RMN but they are all obvious 2018 games worth checking out.

Some of the highlight games that are on RMN and are nominate-able:

Still a day left for nominations, so I doubt everyone will have time to play this all, but just in case you played some IGMC entries and forgot if they're on RMN or not. I kind of wish we could just nominate more than 1 for each category at this point.

Close
06/22/2019 01:23 PM
Hi.
I have surely missed something, but why is there no: something like-game of the year, the best game you have played this year.?
I know it`s categories for funniest game, best translated and maybe some more.
But it`s maybe too hard to choose the absolutely best game from all the great games that hascoming out .
About that i feel like Darken said:2019 is gonna be year of the rm2k/3(with some exceptions of course. But it`s really great to see all great RM2K3 games 2019.
Sooz

author=kenlan
Hi.
I have surely missed something, but why is there no: something like-game of the year, the best game you have played this year.?

Game of the Year
The absolute best game you played from RMN for the current year (any genre).