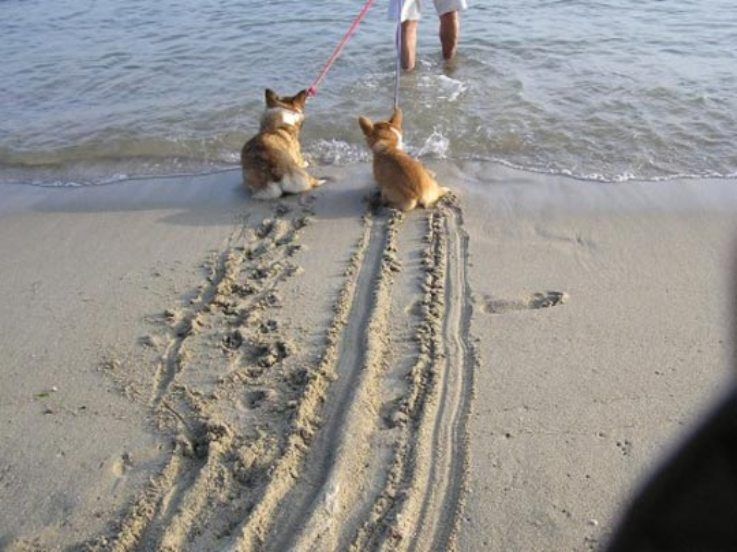 Splooge. Splooge is inside.
Hexatona

Hanamaru was curling up to sleep, when a gigantic airship floated up to her window and a curious fellow who looked something like a clown with green skin and a top hat leaned in.

"Heya Hana, wanna go to a land of Dreams?"

She hopped aboard and soon they started floating all over the dang place. She watched as fantastical lands passed beneath their ships. World of Toys, and Candy, Games, and Food and Star Stuff and Light and Darkness.

"So, uh, we gonna stop in one of these?" she asked, turning to the strange man.

"Oh sure, our destination is just coming right op over those mountains."

Hanamaru looked to where he had pointed, and the ship was sailing between a pair of rolling hills. "Huh, pretty smooth mountains."

Eventually, all became clear. They floated over the mountains and things looked her much like they had in the other fantastic lands. But there were far more people in skimpier outfits, and some of the themes seemed a bit... innapropriate.

Hana was about to protest, but then she got an eyeful of the generously proportioned people, and wiping a bit of drool from her mouth, she replied, "Hey look I'm home!" And practically leapt from the Airship into their warm, partially oiled arms.

Is that a baguette in your trousers or are you just happy to see me?

Come over here and taste some of my sourdough

Donuts aren't the only things with holes that need filling, honey
Hexatona

Delsin was looking through the personals when an interesting ad caught her eye.

Submissive Wanted
Must have a fit body
and good will power

She bit her lip. Maybe just seeing him couldn't hurt?

She went to the address, which was in the next town over. Turns out it was the local doctor, who lived up a ridiculously large hill. It's all part of the experience, girl... She finally reached the summit, and when the door opened, A calm looking man in somewhat billowy clothes and circular glasses greeted her. "Ah, are you here about the Ad? My name is Citan, pleasure to meet you."

Delsin blushed, he was fetching and obviously of good breeding. As she stepped in, she noticed that he wasn't alone. "Um, is t-that your wife? Is this..?"

"Oh yes, perfectly fine. Now, I'd like to get started. We need to test your endurance and will. Are you up for it?"

So, he walked her into the study, and bade her get on all fours. "Alright, you will be my foot stool until I say otherwise, okay?"

"Foot Stools do not talk."

Then, Citan sat down in the nearby chair, and put his legs on her. Then he opened a book, and began to read.

It was indeed a test of her determination. Her body began to ache, but she told herself, it was worth it to serve this man.

Two hours in, her body was quite sore. Suddenly, there was a knock at the door, which Citan got up to investigate.

There was a man at the door with a small table. "Ah, Dr. Citan, Sir. I finally have your stool fixed!"

"Wonderful, my good man. I just couldn't read properly at all without my feet raised."

A moment later, Citan had the stool in Delsin's place, and Delsin was at the door. "Well, I hope you enjoyed yourself, you were very helpful."

Then the door was closed in her face.

Dyhalto looked at his telemapper. Deep beneath the surface of Zylton III, it was the only guide he had navigating the deep caverns in which he found himself, trying to gather research data for his thesis on rock strata formations on earth-sized worlds.

Just ahead, however, he noticed a very strange formation that immediately piqued his interest. Around a few bends and massive stalagmites, he came upon a chamber that was obviously unnatural. It was very rectangular and the sides of the chamber had the appearance of being carved into smooth walls. The entry he had used to spy on the room seemed to be from a recent wall cave in, as he had to crawl over several large boulders to get a good look.

He also noticed a series of orderly pedestals throughout the 'room' which were metal and obviously powered for some purpose, and atop them sat clear glass or plastic domes. Inside the domes were strange glob-like creatures, mostly transparent with visible internal organs, and a set of strong teeth on the bottom. Like air-borne jellyfish.

Now absolutely terrified, he turned to leave the way he had come, but noticed that one of the pedestals had been crushed in the rock slide from the opening he has used. And, there was a strange chirping noice in the air.

Now well and truly terrified, he scaled the boulders to get to the crevice. Then, he heard it. CHIRP.

A powerful body plowed into him and he went tumbling down into the room once more.

Dyhalto thought to himself, 'Okay, what are you supposed to do with a metroid? Like, don't they attack heads? So I should like... roll up into a ball! Yes!'

Without a moment to spare before the metroid swooped in for his second attack, Dyhalto curled up into a ball and hid his head under his arms. 'Yes!' he thought. 'I'll be safe until it loses interest!'

He could feel the Metroid float nearby, and poke around the top of his head, before it violently attached itself to his anus.

His pants were torn mercilessly, and the grip of the monster was terrible and unbreakable. All he could feel was a powerful feeling of negatice presure, and being drained of his life.

he heard a door open, and turned his head to look at his potential saviors. Space Pirates! The pair of chitinous beasts spotted him immediately, and came to stand over him. They did not move to aid him however.

At this time, the metroid was vigorously clamping on Dyhalto's anus, and it began to mix strange feelings in with the discomfort. He got a very... very unfortunate and completely involuntary erection.

At this point, the space piratesd began to notice what was going on, and did their own clacking approximation of a laugh.

"Uuugh! S-Stop it!" He tried to swat the Metroid away, but it was futile, and the increased aggresive moves by the thing seemed to send a strange twang of electricity up his body.

It was at that moment the distracted and thoroughly amused Space Pirates heads exploded. From the doorways, Dyhalto could see the famous Bounty Hunter, Samus Aran, standing with a smoking barrel levelled in their direction.

"H-~help meee~" he cried again, and this time, she noticed him, and with a flurry of ice blasts and mini missiles, the Metroid was obliterated. The concussive force of the last missile was too much, though, and it sent the final twinge of pleasure rocketing through Dyhalto's body. "Hhhhnng~" he moaned involuntarily, and made a very unfortunate mess in his... pants (or what remained of them.)

The bounty hunter regarded him for a moment, watching him shake and pant and try to get up.

The bounty hunter raised her visor, and a sneer of distain was plain on her face. "Goddamned pervs, one on every job... I'm not a peiece of meat you lowlife." Before walking back to the door and the rest of the base she was obliterating.

Also, dang, this is what you decide to put as your first post?
lerd
0

Also, dang, this is what you decide to put as your first post?

Also, dang, this is what you decide to put as your first post?

You might get wrapped up into something you may not want to. Tread lightly, hero.
LockeZ

Close
04/11/2018 07:52 PM
When do you start doubling up and using the same RMNers again? Hopefully soon, I feel like the only reason this slowed down is because you started to run out.
Hexatona

,... having said that I need to work on being much shorter!!
Sooz

author=LockeZ
I feel like the only reason this slowed down is because you started to run out.