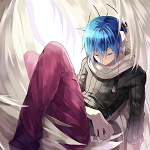 Guardian Ghost of the Description Thread
19574