WHAT'S THE WORST RPG MAKER GAME YOU'VE PLAYED AND WHY

author=Tw0Face
So why just list bad games and talk about how bad they are and not why they're bad and what needs to be improved to make them more fun? That would be much more productive. At best, we can learn something from it.

Being a deviant has its consequences.
Antisocial acts such as stealing may
not seem to have immediate effects,
but be sure that they will have
dire consequences in the future should
you continually commit such acts!

When I was working at the limestone
quarry west of here, I notcied a certain
familiar luster amongst the stones.
What was it, you ask? Why, it
was the scintilating glint of the aurus
stone! My joy was quickly tempered,
however, when I was made aware of
company policy regarding precious
metals and stones. Half of the lowest
bidder's sale price goes to the
corporation! As a result, I am only
somewhat rich as opposed to
basking in the annals of affluence!

Taken out of context, you might think that there's a character who's a highly intellectual quarry worker and likes to blabber on about mathematical formulas, but actually those are all random townspeople you meet on the street.

There is one guy in the science conference (of all places) who talks in l337 speak, but every other character talks like that.

I think this may have been the developer trying to insulate himself from criticism. If people don't like the characters, plot, setting or story its easy to just claim that they weren't smart enough to understand it.
dethmetal

Stand back. Artist at work. I paint with enthusiasm if not with talent.
6117

author=dethmetal
I want to know what RPG Advocate is up to these days.

I know he was working on Ara Fell XP, and I know he got into an argument with the Final Fantasy: Time and Again folks, but after that he just sort of disappeared.
pianotm

Close
10/24/2019 07:38 AM
Actually, I haven't experienced any really bad maker games. Dhux's Car has an awful arts but the story was really fun and interesting. Memento was kinda boring but had interesting designs and the concept. The only game I couldn't play at all was "To the moon" since it seemed too pretentious to me.
Hexatona

Hexatona
S.T.D. was pretty terrible. It was like a how to on how not to make a game.

You see? It wasn't actually a terrible game! It made a great bad example!
Erilex 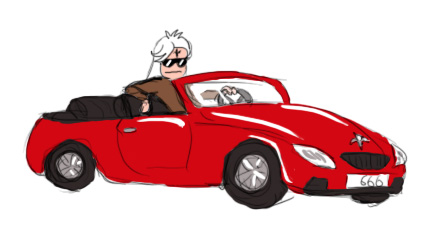 Close
10/29/2019 12:40 AM
I thought Dhux's Scar did a great job with the graphics, personally. XD
There's some pretty neat effects in the game considering it's XP.
pianotm

...To be honest, I've seen worse, and as a style of its own, it has charm. But then again, a single, out-of-context image is no measure of a game's look.
Erilex

...To be honest, I've seen worse, and as a style of its own, it has charm. But then again, a single, out-of-context image is no measure of a game's look.

It's a joke about Ven813 missing a letter and typing "car" instead of "scar". That's just a 10 minute sketch I made on the spot, it's not actually from the game.
pianotm

...To be honest, I've seen worse, and as a style of its own, it has charm. But then again, a single, out-of-context image is no measure of a game's look.

It's a joke about Ven813 missing a letter and typing "car" instead of "scar". That's just a 10 minute sketch I made on the spot, it's not actually from the game.

Lol, I didn't even notice, but your car fit Celianne at 100%. Saved!
thesacredlobo

Dragon Lancer is the worst game ever made. The creator of that game is a dweeb.
TheRpgmakerAddict

Close
12/05/2019 03:24 PM
Hm Dhux's Car isn't good looking but at least it doesn't use the usual rips and has a distinct charm, but I'm too fearful to play that game after the things I've read about its difficulty.

For me there are three kinds of worst Rpgmaker game:

A) The terrible game with singular resources: for example The Asylum of Pleasure and Pain and its spin off and derived games that I'll never find. Also some unfindable games I saw on youtube, like the Killer7 Rmk fangame. I'd never play them at all but I wish I could find the sprites/songs used.

B) The terrible game with boring style: for example...well I can't remember the title, but it was something like "Magic Sword" and had even two sequels: used mainly rtp, maps were huge and half empty, unbalanced enemies, and I was unnerved by the fact that the protagonist had an anime face and the father had a face taken from a renaissance painting. Not to mention the dialogues, but he if this was made for fun/comedy... well it's awful.
(I know that using resources from different sources it's normal for the Rmk2003 games, but for example games like Warrior Saga or Legion Saga try to create a coherent setting. This was not even trying!)

author=Jeroen_Sol
I'm sure there's some bad games around (That Hawkman game sounds very yikes), but I'm not sure the existence of this thread is very conducive to a positive atmosphere here on the forums.

I was going to post something very much like this, honestly, but then the first game mentioned was essentially "Rapeman" and it's like...if that's the quality of games we're going to be mocking, then fuck it, mock away.

(If anyone has a copy of this "Hawkman", PM me. I 100% agree with the BAN THIS SICK FILTH approach the site took with it...I just have a lot of morbid curiosity.)

Personally, I don't much like Polymorphous Perversity. I'm offended by it but not on the prudish sex-negative level, I just find it puerile, immature and childish, esp. when compared with the dev's other work. Like am I really picking "Fuck" or whatever from the 2k3 DBS and choosing a target to "Fuck". And this is the kind of RM game that gets MSM coverage?

It is completely inappropriate for Phylomortis to be discussed in the same breath with the trash that's being discussed here. The dialogue (and all the text in the game) is an intentional stylistic choice that I personally find hilarious. The only issue I had with Phylomortis was the gameplay which was overcomplicated but its overcomplication was irrelevant because IIRC it was also just plain fucking impossible. But the creator had an important role in the pre-Kadokawa-and-the-rest-of-the-Japanese-noticing-we-existed history of the localization of RPG Maker, and is due, in my opinion, some small degree of respect.

I find it weird as hell that Dhux's Scar was even mentioned here considering it was a featured game? Like, I mean, I get that people have opinions and those opinions are wildly divergent but...I feel like being discussed in this thread and being a featured game are mutually exclusive.

The "Dhux's Car" bit was funny though so whatever.
Pages: first prev 123 next last
Forums :: Videogames
Back to Top