[MAFIA] CHRONO TRIGGER - A MAFIA THROUGH TIME - GAME OVER 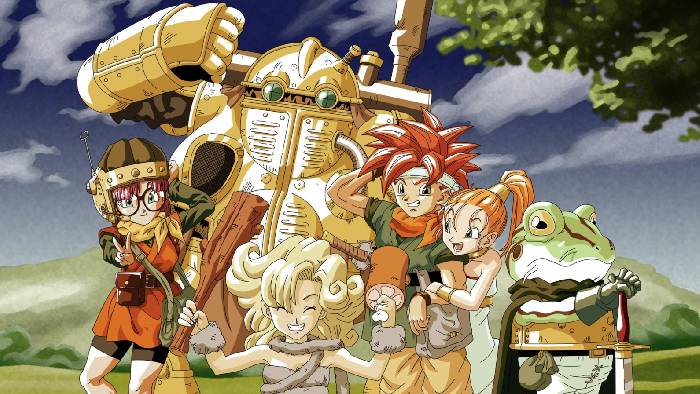 This is closed setup mafia game, that I will try to make work for however many sign-ups I get (11). Sign-ups are now closed!

Wikipedia
Mafia (Russian: Ма́фия, also known as Werewolf) is a party game created in the USSR by Dimitry Davidoff in 1986, modelling a battle between an informed minority (the mafia) and an uninformed majority (the townspeople). Players are secretly assigned roles: either mafia, who know each other; or townspeople, who know only the number of mafia amongst them. In the game's night phase the mafia covertly "murder" a townsperson. During the day phase, all of the surviving players debate the identities of the mafia and vote to eliminate a suspect. Play continues until all of the mafia have been eliminated, or until the mafia outnumber the townspeople. A typical game starts with seven townspeople and two mafiosi.

Standard Roles and Rules:
Show
Before the game begins, each player is sent a PM assigning him or her a role. The contents of the PM cannot be shared with other players. All roles are assigned randomly. There are three basic types of roles that you can get: Town, Mafia and Independent.

Town
If you are part of the Town, then your objective as a group is to stay alive and try to find out who the Mafia are. Since you cannot communicate with other players outside of this thread, you must work together and weed out who is lying and who is not. Townies who die still win when the rest of the town wins.

Mafia
The Mafia (aka Scum) on the other hand, have a significant advantage over the Town. They can communicate with other scum members outside the thread during night phase. During the night, they can come together, discuss, and kill a townie. If all goes according to their plan (which it might not), then that townie will be dead -thus cannot post or vote- for the rest of the game.

Independent
As an Independent, your job is to survive until the end of the game. Depending on your role, this may constitute killing of all Town-aligned players and Mafia and being the only player left alive or simply staying alive regardless of whether the Town or Mafia win, and having a separate win condition. An independent may or may not be in the game.

Game Structure:
The game starts out in something called a day phase. In this phase, all players who are not dead may participate in discussion as well as vote for who gets lynched (note that you can also vote for no one getting lynched). The day phase will continue until a set deadline has passed or when deciding vote is reached.
Once the day phase is finished, the night phase begins. No one may talk in the thread during this phase, meaning that only players with night actions play a significant role. Night actions are abilities possessed by special roles that can be used to alter the game during the night phase. All night actions, including the scum's kill, will be sent to me via PM(unless otherwise stated). Once the night phase deadline is reached or when all actions are sent in, I will PM everyone involved with their results and then a new day phase will begin. If anyone dies, then that person will be revealed.

Rinse and repeat until the game is over...

The Rules:
1. VOTING: Voting should look like this:
#Lynch Jeroen_Sol or #NoLynch
And if you wish to change your vote, first cancel your first vote like this:
#Cancel
It needs to be bold and with a # in front of it, to make it easier for me to make vote counts.

7. ANTI-STALLING RULES:
- 1: If nobody dies two day and night phases in a row due to any faction withholding kills, the game ends in favour of whichever faction(s) did not withhold their kill in those two day and night phases, or was the last to do so if all factions did.
- 2: If a nolynch happens at MYLO (non-scum = scum + 2), scum must attempt to kill the following night phase.

The main gimmick of this game is time travel. The following list of time periods exists in the game:


Each time period will have a global effect which can be positive or negative on all living players. On top of this, some time periods may have additional effects on specific players based on their magical element. The effects of a time period will become public when a day phase starts in that time period. Each day, living players can vote on what time period to travel to in the next day phase like #Travel 1000 A.D. The next destination must be chosen from the list of unexplored time periods, and is decided by plurality vote. (Lynches are the standard majority) Should the game last until the 7th game day, all time periods will become available again, this time of course with their effect already known.

When signing up, please provide a #Travel vote for day 1. This time period will also be chosen by plurality.

Abilities in this game will cost MP to use. As such, all abilities in this game can be interpreted to be X-shot. All players start the game with 3 MP. It is possible to lose or gain MP under certain circumstances.
Some characters may have both day-phase and night-phase abilities. Unless otherwise stated, you are allowed to use at most 1 ability per full game day. This means that using a day ability prevents you from also using a night ability the following night.

Day actions are to be sent to me via PM during day phase. They can take effect immediately, or at the end of the day. When using a day action, I will make it public in my next votecount that a day action has been used, but not what action or by whom.

Vanilla Town Role PM:
Show
You are a Vanilla Town!
You have no magical element. You start with 3 MP.

You win when all scum are killed.
You lose when the scum outnumber the town.

Edit: Didn't that say age of monsters instead of age of fiends a min ago, or am I crazy?
Jeroen_Sol

author=demonlord5000
Didn't that say age of monsters instead of age of fiends a min ago, or am I crazy?

It did. I changed it. Your vote still stands though.
AlaskanEmily

That sounds like a lovely time to be!
oddRABBIT

Edit: these are some nice standard rules you have
LockeZ

author=AlaskanEmily
I have a terrible confession. I have never played Chrono Trigger.

I don't care if normal people haven't played Chrono Trigger, but if you're an RPG developer and you haven't played Chrono Trigger, that's actually horrible. That's like being an oil painter and having never seen Starry Night, or being an adventure film director and having never watched Star Wars. Stop, go play it. We'll wait. Come back to the mafia game when you're done.
Jeroen_Sol

author=Cap_H
these are some nice standard rules you have

I should probably read them again and see if they need any updating. Last few games I hosted I've just been mindlessly copy-pasting them.

I think I should be able to find some time for some more mafia.

Abilities in this game will cost MP to use. As such, all abilities in this game can be interpreted to be X-shot. All players start the game with 3 MP. It is possible to lose or gain MP under certain circumstances.
Some characters may have both day-phase and night-phase abilities. Unless otherwise stated, you are allowed to use at most 1 ability per full game day. This means that using a day ability prevents you from also using a night ability the following night.
OldPat

I'm not the first to make that typo either. There are loads of images of Chrono Tigger, presumably because of people making the exact same typo.
Jeroen_Sol

Close
04/22/2020 01:28 PM
In any case, we have 8 players, so I'm going to start the countdown on these sign-ups. I'm hoping for at least one more player, so I'm going to keep sign-ups open until Friday, and then start the game.
I'll also PM Cave and tale to ask if they want to play.
CAVE_DOG_IS_BACK