After my attempt to ask odd for lynch vote.

Can you explain why you said, Very easy to do that.
demonlord5000

author=demonlord5000
Small observation. I went back to read caps reads and his original fakedoctor pick was emily as well, but also immediately disagreed with psy's analysis of emily. Cap, why did you originally pick emily over oldpat as your pick for being scum?

I think you can find it in my posts. I originally found old to be sketchier, but I reread the thread and Alaskan's cc was very risky.

author=demonlord5000
I think the only chance of that happening is through nolynch and getting more information. If fomar is scum he is practically forced to kill one of us or oddrabbit, but then there is a chance of odd revealing the miller which could be very good for us.

I think this post should be used as an evidence against you. Earlier, you happily jumped on psy and now you talk about no lynch as our only chance. Sounds like a contradiction. Compare it with Emily's post. She's way more consistent
Cap_H

Close
05/16/2020 09:48 PM
I didn't really want to explain this as no lynch was kind of a trap. I was suggesting it because I was hoping I might get some insight from scums' positions on it.

To be honest tale, no lynch isn't really about getting your cop read, with the miller and lawyer the percentages aren't good enough. I don't think a dodgy cop read is worth losing another town for. We'll be in the same position choice wise tomorrow except odds are I'll be dead and you'll have two people claiming miller or maybe even get a false town result.

No lynch is all about what scum do, if they night kill myself or Cap_H then they're not concerned about revealing the miller (if they do NK Cap_H then Psy is scum). Either they know Jeroen was the miller, or they know Psy is the miller. Or they're willing to risk it - if we get through today, then our position isn't terrible. If they kill the doctor it's because they're being pragmatic, if the fake doctor is the last scum they can't win.

It's all ifs and buts. I was looking at Psy, Cap_H, demonlord, OldPat and AlaskenEmily to see how they responded to it.

The best course of action is to lynch demonlord. Psy, Cap_H and I whom everyone knows can't all be scum have scumread him (probably one of us is scum bussing, small chance of two us but probably one).

Tale we need your help, it takes 5 to lynch and there are only 5 town left.

I know demonlord talked to you for a while but look at what he said:

author=demonlord5000
unless scum kill odd for some reason

Everybody knows Odd isn't getting night killed, he is safe all the way to the end.

author=demonlord5000
The odds of lynching correctly would be much higher if we knew who the miller was. The problem is psy could easily be scum pretending to be the miller. There is no way to know for sure unless scum kill for some reason.

He's right there's no way to be sure, but everyone already knew that. He's trying to sound reasonable.

All he has to do is convince one town e.g. you, not to vote for him and scum can force a no lynch.

author=demonlord5000
I think the only chance of that happening is through nolynch and getting more information. If fomar is scum he is practically forced to kill one of us or oddrabbit, but then there is a chance of odd revealing the miller which could be very good for us.

If I were scum then when I did the maths for this: 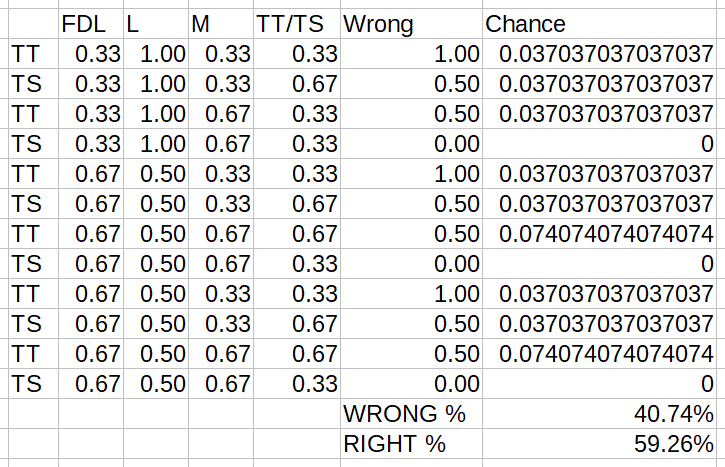 I would have left in Jeroen and myself and maybe some of the confirmed towns, basically all the non-viable options and removed my own knowledge and told you the odds of Psy being scum were much higher. If I had gone for Psy, he'd be at four votes and I'm sure you or Odd would have followed my lead (or another scum would have joined to hammer and win).
demonlord5000

Putting yourself one vote from hammer (which if you're town means we'll lose) does nothing to convince me you're not scum.
demonlord5000

To town, knowing who's the doctor puts situation at risk. If it's an oracle- scum would know who to avoid.
Fomar0153

author=tale
Fomar, before OldPat was about to be lynched- psy asked Pat to claim oracle/doctor.

To town, knowing who's the doctor puts situation at risk. If it's an oracle- scum would know who to avoid.

I think Psy explained his reasoning somewhere, I'll try and find it. It was certainly something that could be interpreted as townie or scummy.
OldPat

Close
05/16/2020 10:11 PM
Guys, my eyes are beginning to feel rather heavy and I have to catch up on lots that has been written. I did read everything, but my mind is a bit off. Proper analyzing will have to wait till tomorrow.

To answer tale, if it's true that Psy's the miller, lynching him is ultra risky. Even with results at hand, I would be extra cautious.

On the other hand, I've always felt suspicious about Demon. He has been on my scum radar since day one, since the LP vote. And I gotta admit, Cap's last observation about Demon being inconsistent looks spot on. Although Demon did point out something that was feeling odd to me too about Cap, the thing about him jumping right away from Emily to me. (which, ironically, is the same kind of inconsistency Cap spotted on him).

That isn't enough to take Demon off the hook for me, though.

If we go for a Demon lynch, I'm down with it. The Emily lynch is a no go anyway, for now.

Bugger, so you, Cap_H and Psy.

To be pedantic.
CAVE_DOG_IS_BACK

demonlord dies. he was the miller