In Sheriff, one player is confirmed town (the eponymous Sheriff). They are immediately confirmed as town, they usually have some level of bulletproof, and their lynch vote will break ties if end-of-day occurs with a tied lynch vote.

Be aware, in Sheriff games the scum usually have fairly powerful abilities.

We need at least 9 people to play. The game can probably accommodate around 13 at most.

I used to play this variant a lot, but apparently it's new to RMN. So here we go!

There's a new sheriff in town!yes I'm going to say that a lot and I encourage you to as well. 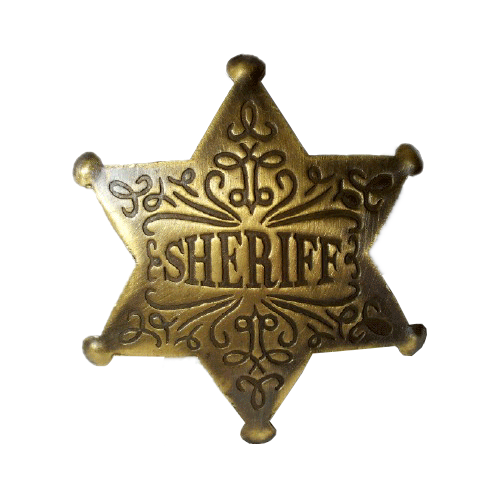 One player is the Sheriff. Their role and alignment are revealed immediately at the start of the game.

Mafia's goal is to reach parity with town players, not counting the sheriff.

Town's goal is to eliminate all threats to town.

The Sheriff is town-aligned, but is NOT counted when determining a mafia victory. For example, the mafia will win if there are two town players, two mafia players, and the sheriff.

Majority Hammer: If a majority of players vote to lynch a player, the day will immediately end.

If hammer is not reached, the player with the majority of votes will be lynched. In the case of a tie, the Sheriff's vote counts as a tie-breaker. If the sheriff's vote is not on one of the tied players, then there is no lynch that day.

Killing the Sheriff is NOT an instant win for the Mafia.

It is possible that not all players in the same faction will have the exact same win condition.

author=AtiyaTheSeeker
Semi-closed? How so? If you still need folks, I'll give this a shot.

Semi-closed as in not all of the possible player roles are known to the players at the start. You won't know all the possible abilities other players might have.
AtiyaTheSeeker

I hope everyone has been brushing up on their gunslinging skills.
OzzyTheOne

Role PMs are out. And as promised, there's a new sheriff in these parts! And it's Gourd_Clae!

Gourd_Clae is a town-aligned sheriff.

Gourd_Clae has single-use bulletproof, which will protect them from a nightkill, any ability which kills, or a lynch.
In the case of a tied lynch vote, Gourd_Clae's vote will act as a tiebreaker.
Gourd_Clae does not count as town for the purpose of player counts in win-conditions.
Pages: first 1234567891011 next last
Forums :: Welp, Welp!
Back to Top