Rules are as follows:
- First rule of Secret Santa club. Don't talk about Secret Santa club.
- Second rule of Secret Santa club. See rule #1.
- Sign up below by leaving a comment that lets me know you're joining in.
- In that same comment list a few things that are your interests or that you'd like to get. It could be a review for a particular game of yours, the fact you like legos and spiderman or something of the like.
- The cut-off date for joining is the 9th of December.
- You will have until the 22nd of December to send me via PM the gift for your Secret Santa.
- I will be posting who had whom in this thread on the 26th so don't go spilling the beans before then!

- If you suddenly need to drop out, PM me ASAP and I'll do some rearrangements. It would be preferable that you don't drop out, though.

- While it is not a requirement to have a game in order to join, it makes things a lot easier on your Secret Santa if you do. In the case that you do not have a game, put some thought into what kinds of things you like when you make your list.

Any questions, feel free to ask~

Edit: Woop! I forgot the wish list! They're in order of preference, but I don't really mind what I get so just pick whatever you want.
♢ If you want to do pixel art or music, maybe something I can use in gammak? I mostly make horror games with 2k3 style REFMAP graphics. Can be anything from tree variations to some corals or something if you go the pixel art route, and for music as long as it sounds spooky I'm happy.
♢ A few minutes long shitpost game I can laugh at. Don't have to spend much effort on it.
♢ A review for any Two Strangers game would be much appreciated. Better yet, a let's play with commentary.
♢ Or if you want to do fanart then any one of these characters?
♢ If you just want to buy me a game I enjoy walking simulators, adventure games and platformers the most. In that order of preference. Please just go for something cheap at least if you decide to go this route.

Things I'd like in no particular order:
-Fanart
-A review for one of my finished games (which there are not many of I know)
-Horror assets of any sort, if they're graphics, it'd be neat if they are VX Ace compatible, otherwise whatever goes, wheter SFX or music.
-If you're willing a silly game is welcome.
-If you have no idea what to do, I'd welcome a game from Steam.
pianotm

Reviews of any of my games are always welcome.
Fanart.
If you decide to go the money route, I have a Dteam wishlist.
Aldu
1020

References of OCs I'd Like Art Of As A Prezzie
Artistic liberties are totally welcome. I find I borrow ideas from other peoples' renditions for my "canon" character designs. ;3

Stand back. Artist at work. I paint with enthusiasm if not with talent.
8801

author=Libbu
- In that same comment list a few things that are your interests or that you'd like to get. It could be a review for a particular game of yours, the fact you like legos and spiderman or something of the like.

Weirdly enough I kind of know what kinda thing i want to gift this year, but i have no clues on what I would like myself.

• A review on one of my unreviewed gams made by me (not the group ones those are a diff thing)
• I've never gotten a dumb short game b4 specially made for me
• Thats it really... If at a loss, i have a steam wishlist.
Fomar0153

I would love a review, particularly of any of the following:
Arum Online
Illy needs to eat a mushroom, dream of being a racoon and then flip the world upside down to win
The Path we Travelled (swap in the middle 2)
Please don't worry about offending me with any low scores. I'd just be happy for them to get a review. All three of them are short <20 minutes each.

Of course feel free to do something different for me.

As for what I'll do for secret santa. Odds are I'll probably review one of your games, or if I know you well enough I might make a small game.
Marrend

Things I would appreciate in no particular order:
If you do fanart, or fanfiction, of one of my myriad cypher games, I would probably be tickled pink.

I wouldn't presume to think that somebody would make a game for me as a Christmas gift. I think this did happen once, though?

If you do an LP, I'd vastly prefer a written format. I know video is quite popular with the kids these days, but, I'm old-fashioned like that.
El_WaKa 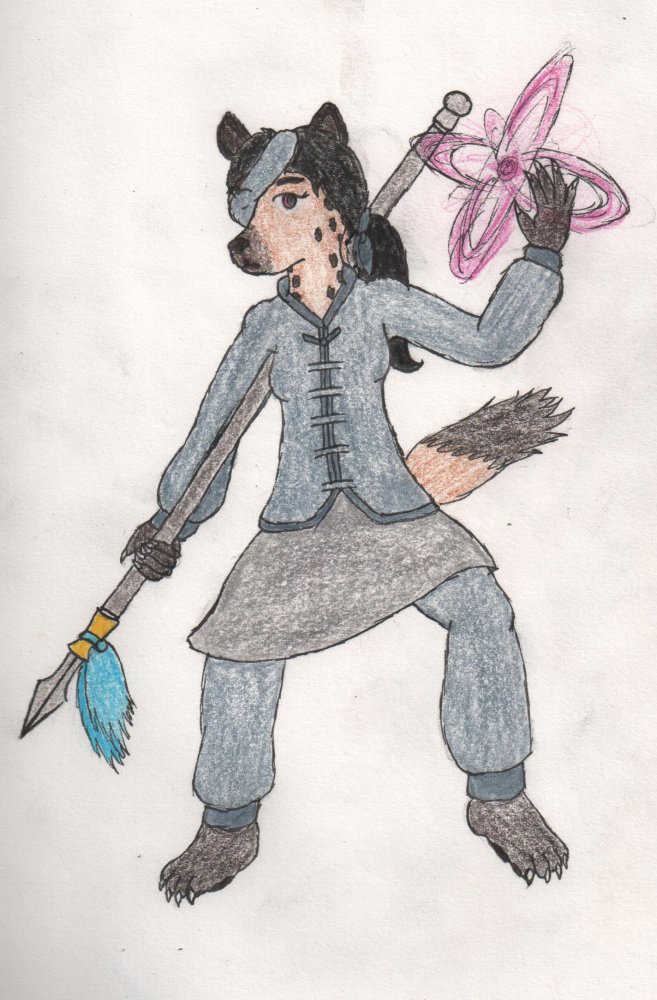 Stand back. Artist at work. I paint with enthusiasm if not with talent.
8801

author=pianotm
Is Jacky actually missing an eye or is it just closed?

She got a Red Ryder BB gun for Christmas one year. Things happened. You should have seen the other guy.
pianotm

Ideally, I'd like a review or some equivalent of Draug's Resurrection, but I realize trying to down what's a 30+ hour game in, uh, 12 days sounds like a pretty rough time. Liberty might not be pleased about it, but I'd totally be happy with a 'Working on a review. About 5/9's done. Like it so far.' if you can't make it under that time limit. Fanart I suppose is acceptable, too.

That's pretty much what I'll be doing in response, too. Review and/or art, in the style of DR (both battle and map sprites, probably multiple characters).
bicfarmer

i was gonna type out this big bullet list of stuff i'd like but im pretty sure its a bad idea. so i'm not gonna ask for anything specific. One thing though is that I dont want reviews of any of my games (i know they all suck so if u want to comment on any just leave a regular comment)
Cap_H

I would appreciate a comic strip (3 panels), which is more about you than about my games. I made all of my games a long time ago and they're not anything I would present myself with now. The strip might be a messy doodle. No need to worry about your ability to draw, I know most of us fancy storytelling, tho. Take this as an exercise in keeping your writing small and to the point.

Ofc I would love any small puzzle or game or haiku too.
Healy

I mostly make games with RPG Maker 2k/2k3, so any kind of resources for that would be great. Graphics, midis, what have you. I especially like faceset graphics, but even a system set would be appreciated.

Not looking for any reviews of my games, but if you'd like to do a Let's Play of one of them that'd be great!

I'm a pretty big fan of the Stan twins from Gravity Falls, so anything relating to them would be great.

Finally, if you want to make a short dumb game for me I'd welcome it!
OldPat

As for what I'd love to receive I mean uhm the usual stuff :)
Play my gams! Review em if you can or just leave your impressions! (Mostly for either Karma Flow or Psyche Locke).

Or anything coming from your kokoro, really!
Pages: first 123456 next last
Forums :: What's Happening in Game Make & RMN
Back to Top