Close
02/21/2021 05:23 PM
So I open up RPG Maker 2003 after a few months of not working on it (basically from just before my dad died in October) only to be greeted by blacked out tilesets and missing graphics. I open up the database and am confronted by a bunch of errors:

The enemies, troops, tilesets (and possibly more?) are all encounter that error, and all of the information is completely wiped out.

So "nbd", I think as I archive this project, figuring something got unexpectedly corrupted. I load up a backup from Oct 7, and hey! my tilesets are good! awesome. ...go into the database and there is tilesets/troops/etc BUT the Battle Screen still gives the error, and is completely blank. 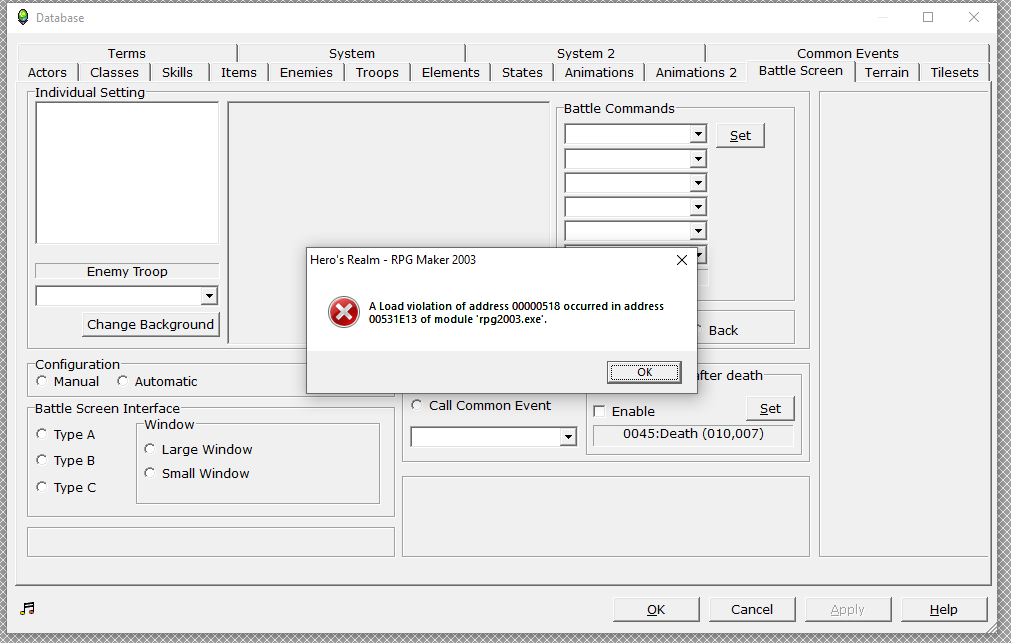 Going to go back to my March 2020 backup next but... has anyone encountered this error before? Do you know what is causing it? Or how to overcome it?

Take frequent backups - that's the lesson here. Now I have to figure out what work I have to redo.
Dyluck

Close
02/21/2021 09:06 PM
This can happen if you delete resources that are still used elsewhere. Here it sounds like you deleted heroes that were still in the default party and so the battle screen can't render the heroes to show their position...

It can be fixed by creating those resources again, i.e. increasing the number of heroes, possibly settings some graphics for them again, etc.

Similar problems can happen if you delete animations, items or chipsets which are still referenced by other parts of your database.

It's also possible that you messed up your RTP so some graphics files are missing, but at least this error address (531E13) is not because of a graphics issue but because of a missing hero.
kentona

E:
I do wonder what I broke though

Could be resources related
Liberty

Close
02/21/2021 10:40 PM
A good way of checking that is to expand your various database categories and then put a jarringly coloured image as that thing (where possible). This way when you playtest, if it's referenced and called in an event that you missed (in a way that makes it visible) you'll find it and can fix that.

You can also use the event search after replacing the hero/item/monster/etc to see if it's part of an event somewhere that is referencing it.

EDIT: It can be anything database-like. Item, heroes, monsters, skills, conditions, tilesets, backgrounds, etc. If you changed anything in the database that has an amount list, that might be the issue. I've caused it by accidentally getting rid of a monster unit that I was using as a test monster before. It's annoying figuring what was causing it, but it ended up being a test map battle calling for that monster.
Cherry

author=kentona
What if I told you I never changed anything with regards to hero counts in this project since 2008?

Then I can only imagine that you opened the project in the wrong RPG Maker version.

Or maybe you opened it in RM2k (instead of RM2k3) once, and changed something in the database window, thereby destroying all RM2k3-specific data...

(If you want you can also send me the project or at least the RPG_RT.ldb file and I can try to figure out what's going on)
kentona

Close
02/22/2021 12:19 AM
My guess is that I had opened it from a folder that was linked to my OneDrive, and like an idiot I didn't realize that OneDrive will "attempt to save space and download files as you use them". My guess is that RM2k3 opened the project while the .ldb file was in an incomplete downloaded state.
Cherry

author=Cherry
Or maybe you opened it in RM2k (instead of RM2k3) once, and changed something in the database window, thereby destroying all RM2k3-specific data...

This might be it, I ran into this exact same problem awhile ago while juggling between advocate rpgmaker2003 and degica/steam rpgmaker2003.

Your backup is probably fine, it's just figuring out which version of 2003 you opened it up and made edits in.

EDIT2: Yeah, I came across this with my own game I've been working on since 2012 - it uses a lot of custom DBS systems in rpgmaker2003; the game still works, it uses old rpgmaker2003, but whenever you try to open it in the editor for steam rpgmaker2003, I get this error; I don't know if it's the same error, but it is an error:(The same thing happens when you check the troops tag)

EDIT3: I've tried this on a few other games and it's popping up there too ...Yeah, I'm kind of stuck on how to fix this myself. You may want to ask someone whose made the transition from old 2003 to steam 2003.

EDIT4: Don't toss away your latest build just yet Chief. 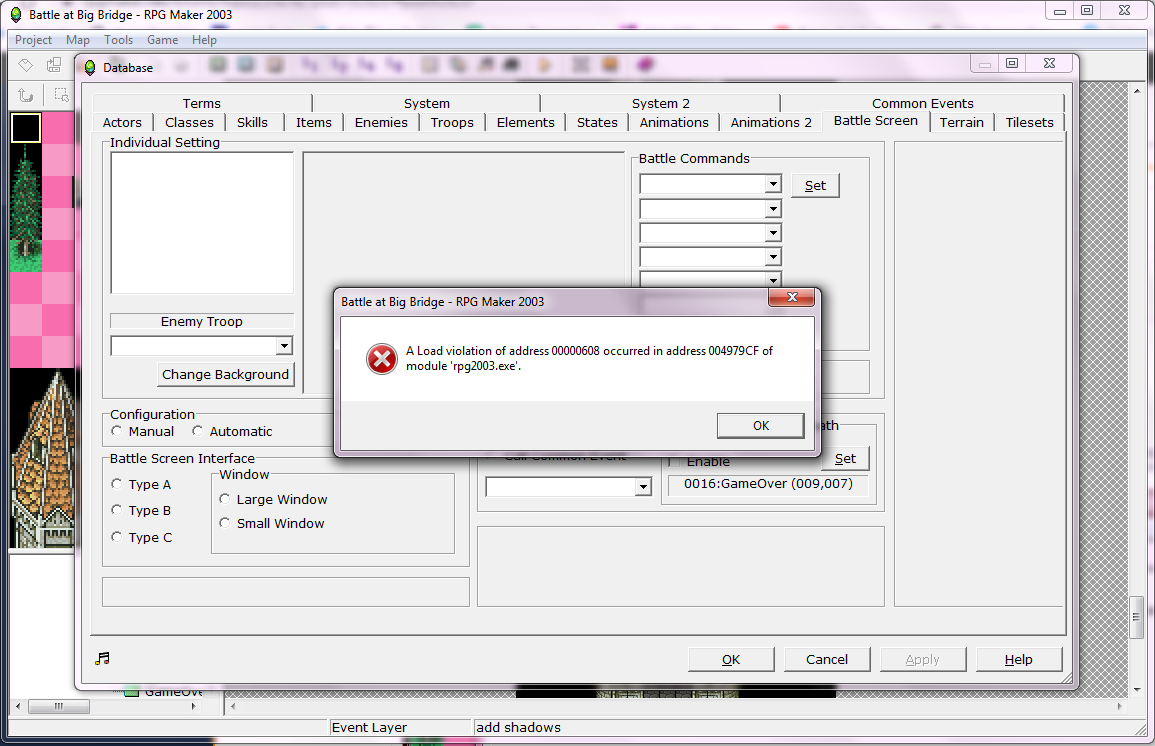 author=LordBlueRouge
You may want to ask someone whose made the transition from old 2003 to steam 2003.

(Hm or did you mean someone who successfully converted their existing game? That wouldn't be me then, right.)

About your error though, LordBlueRouge, it's not the same as kentona's problem. You have a crash on address 4979CF which is drawing graphics. I assume what is happening here is that this database tab normally renders a battle backdrop to show the position of the characters on it, but the file doesn't exist. Most likely that's because it was previously an RTP file but from the unofficial RTP, and in the official RTP that file either doesn't exist or is called differently. The solution would therefore be to open the project in the old RM again and use the "Change Background" button to set another backdrop which is a custom imported file (so that it will exist regardless of which RTP is in use), or of course you can just import the file from the old RTP once you know which one it is. The same thing goes for the issue on the troops tab, since there is also a background being rendered.

kentona's issue is that the RM is attempting to read from a hero with an ID that doesn't exist in the database, for some reason. To say more, I'd have to get the project and debug the crash myself (or look a memory dump, which can be created in task manager - while the error box is open, rightclick rpg2003.exe in task manager's details tab and use the option "dump").

EDIT: I looked at kentona's error in more detail now and I can see the bad hero ID comes from the place where it stores which hero was last selected for the placement preview in the "Individual Setting" list on the top left. Maybe this was a long time ago but it sounds like you did have more heroes in the database some day, and you had a "higher" one selected there the last time you were on this database tab. The solution is to temporarily increase the number of heroes to the maximum, then go to this tab and select a different hero (say #1) and then reduce the number of heroes again.

You said you also have this on tabs not related to the backdrop, such as tileset (I'm assuming with a different error address though), and you also mentioned blacked out graphics, so I'd say there is a chance you additionally have the issue LordBlueRouge has, that you converted your project to the official version, dismissing the warning about changed RTP once (probably not realizing what its impact can be) but having some old RTP resources still referenced. The catch-all solution would be to copy the whole old RTP into your project, at least temporarily, so all files can be found regardless which RTP the RPG Maker is using.

EDIT2: I realize there is also a way how you'd have never seen any update prompt or warning at all - if you had originally used version 1.10. I added this update dialog only in 1.11 I think.
Cherry

Close
03/14/2021 01:00 PM
I'm just curious, were the things I mentioned actually the cause for you? Did you solve it, kentona and LordBlueRouge?
LordBlueRouge

author=Cherry
I'm just curious, were the things I mentioned actually the cause for you? Did you solve it, kentona and LordBlueRouge?

I have a backup of a backup. So I am okay. But I was still curious why this issue happened and I wanted to help solve it in case anyone else runs into it in the future. But yes, it does sound like an RTP issue when transferring from old rpgmaker2003 to steam rpgmaker2003 - I'll check this again and try it out tonight when I have the chance.

Thank you again for your support Cherry!
kentona

I have copied the entire RTP into my project years ago, prior to converting to the Steam RM2k3 (prior to that existing, in fact!).

I think the most likely cause was missing files corrupting the database, because I had the project stored in my OneDrive AND microsoft helpfully implemented a "feature" that would delete local files if they weren't being used/accessed in a while.

Close
04/29/2022 12:38 AM
Hey I ran into *almost* the exact same error, but I believe my first number was 00000513 instead of 00000518. Anyways, thanks to this thread I figured out where my missing resources were. There were some files I stored in the folder with RPG Maker 2003 with my old RPG Maker. In my steam version I placed those files with the folder RPG Maker 2003 and then the battle tab instantly loaded. I'm thinking that the resources were in this directory. Hope this helps! Know, at least, that if the resources are missing somewhere else, that's definitely the issue here!
Pages: 1
Forums :: Help Me!
Back to Top