author=Erave
Shadows of Adam has been my main project for 3 years. Nearing its end. Going to beta soon and just put out a cool new trailer!

Your game looks so lovably nostalgic. Seeing the game in motion is more impressive than the screenshots you've posted (and those screens weren't bad to begin with)

author=Nana707
I'm helping with tilesets now, so our process of filling the map is way faster. I do think we still need some variations of grass to fill some empty spaces, tho.

Don't be afraid of empty space! It gives the player's eyes a chance to rest and focus on what's important.
Pyramid_Head

Close
10/06/2016 12:17 AM
I'm just working on the next dungeon on Steel Spirit SaGa, after taking too long a break. The next dungeon is a desert canyon area, and I suck at mapping deserts and canyons...
Nana707 Close
10/06/2016 12:44 AM
@Sated
As stated by people above, the brown isn't working since it's too pale, it's drawing too much attention, I would recommend some more tone down colours, such as these suggestions: (maybe the last blue won't work that much, but grayish tones will work just fine!)

@LockeZ @Kaempfer Thanks! The forum helped a lot. It's funny how I thought the first map was "so great" back then xD

@Ramshackin Thanks for the advice! I'm always looking at those filled maps and envying the 'genious' behind those, so I'm getting a little paranoid. But I'll keep this in mind.
Sated
4005

author=Rebezion
I am reworking some rooms. Adding bunch of destroyable stuff.

Can I just say that knife-whip animation is snazzy as hell? :o
Xenomic 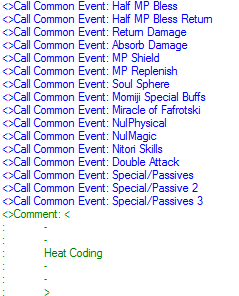 This is in every enemy event in the game bar special coding like Auto-Life coding for specific enemies. I actually took the time to put all of these into a Common Event that would replace these in the Turns Elapsed battle event. The question is: Would any of these break if I did that?

I at least got past Pestilence (removed Seven Sins, got rid of Seven Virtues for Hope, gave Hope Resist instead (60 MP, single ally, prevents all buffs and debuffs for 60 turns), and changed her Pox Alleviate skill to Decay (Grants level 5 buffs (25 turns), but at the cost of granting Doom/Zombie to one ally). Still have to code Extinction for her, but that'll be for later. I'm trying to figure out what all I can put into this common event that won't break, since these are all for battles specifically.

Also, yes, there's a lot of Armor/Weapon Bless events, and they're probably what causes slowdown in my game. I would LIKE to keep them, and the Armor Elemental Bless I probably can by changing the coding, which will be easier since I can do that, but I can't really do that feasibly for Armor Status Bless, nor can I do that for Weapon Bless at all. And as you can tell, Weapon Bless has a loooooot of stuff (7 months of 12 hour coding to do it all, and it's not even 100% done. That's how bad it is...). Feature creeping?? I don't know, probably. But with 20-28 characters that you can use, gotta make them all unique and whatnot (though some still need updating because they suck so hard...I'm looking at you Suwako!!).
Chilly-Pheese-Steak

I don't even know what to call this one. Still working on it.

author=Chilly-Pheese-Steak
I don't even know what to call this one. Still working on it.

author=Sated
Never liked any of the RTP options for stone caves. Threw this together by editing the RTP tiles a little. Any good? This wouldn't be an in-game map, it's just to show the chipset in action. I'm definitely going to change the steps for something less overstated...

Now with less accidental red, and I've also fixed the palette so that I could use even more shades of grey: edit: oh yeah yesterday i finally made a node menu so we can actually interact wit hthe game world

is it not beautiful

i've made it tremendously plug-and-play so that i can easily start shifting all of our design doc work into the actual game. basically i can add character abilities to all of the various node types, like telia auto-unlocking chests or gwendolyn being able to turn non-combat nodes into sacrifical pits

Close
10/09/2016 12:14 PM
Ironically, the game I'm working on does have a steal system. Copy/pasting events from one monster group to the next is definitely something that I won't miss if I ever stop using RM2K/3 :)
Chilly-Pheese-Steak

I dunno if this is a good thing or a bad thing.

A lot of flash RPGs do this and sometimes people have problems with it.
Craze

Close
10/11/2016 11:13 AM
maybe you should focus on identifying your core themes and then deciding on mechanics that fit in with and compliment those themes.
Deltree
doesn't live here anymore
4556

So this interesting glitch started popping up randomly since I updated Unity last week. Sometimes, the numbers on the UI will be replaced by hieroglyphics.

I'm not sure where to even begin tackling this one (I'm guessing something to do with the texture atlas generated for fonts), but infrequent posts on the Unity boards say that it only occurs in the editor and won't happen in builds. We'll see about that.
Chilly-Pheese-Steak

author=Craze
maybe you should focus on identifying your core themes and then deciding on mechanics that fit in with and compliment those themes.

I wouldn't even know where to begin with this. I'm starting to regret making a Custom Battle System because I don't know what direction I wanted to go with it.:(

Yeesh. I fixed that. I dread what other typos people are going to find when I release a demo because I didn't even catch that one.
Sated
4005

Close
10/13/2016 09:10 PM
Try using the default battle system first and see if that works for what you need. To be honest, there's a lot of unnecessary stigma that straight, no-frills turn-based games are taboo, but I've gotten more enjoyment out of some RM games that have lovingly-refined DBS over games that are loaded up with scripts and gimmicks that only take a step or two into.

I love the DBS. Sometimes, fewer mechanics means more room to refine those mechanics. Rather than juggling a bunch of ideas that sounded cool at the time.
Sgt M 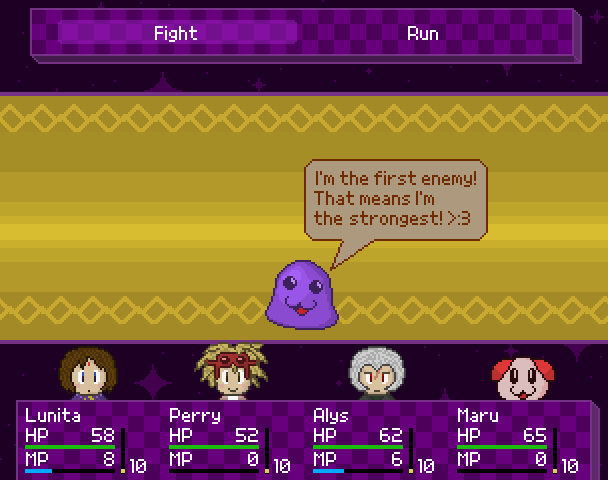 Chatty enemies! Sometimes between turns, or when certain conditions are met, enemies will have things to say. They play as an animation at the end of a turn, so it doesn't pause input and you can still enter commands as the animation plays through.
Healy