Close
05/02/2017 07:09 PM
Tried working on a game again! I had noticed that shops and what equipment they sell is kinda fucked up so to get an idea of how it all came together I made a giant excel spreadsheet of all the towns and what gear they sold. With it I could see all kinds of little issues (the general tier 3 shop is way easier to get to than the tier 2 shop, or gear that just straight up wasn't accessible for example). Spent some time thinking about how I wanted to lay out gear, what towns had too much, what ones didn't have enough, what towns were total flyover territory, and trying to rearrange what they sold to try and deal with it. After way too long I settled on something for now.

Related to above I added map treasure to the above chart to make sure it was all available and I could remember where I put it. I almost had two one of a kind items because I wasn't keeping track of this shit! This is one reason why I'm bad at making video games, I try to keep everything in my head and like an idiot screw everything up.

Also related to the aboves, I reviewed dungeon rewards and redid almost all of them. Dungeons used to reward some EXP but it was boring when you'd level up there because it would just give the boring level up textbox instead of the cooler level up in battle window and I don't want to muck about with it. Plus I decided that dungeons would only have up to three rewards and opening up the EXP slot for something else means I can give out more interesting loot. Also changed out rewards to give out more interesting loot.

Also also related to the above, the final dungeons had shitty rewards. Most of them don't even have notes as hints to where the final dungeon or the macguffins are. The improvement wasn't all great, I didn't have room in the database to add too much without having to reorder everything or yet another script fix. I settled with some super stat up items (you also can't buy stat up items anymore) and using up what space I had (basically accessories since those were at the end).


Also also also not entirely related to the above I looked over some stuff I hadn't finished and decided to keep or drop it. There's some weird stuff that looks like some attempt at adding more story that I'm just gonna drop (see keeping everything in my head issue again), and a really excessive amount of a certain type of weapon that I'm going to chop to reduce analysis paralysis (also on my part).

Fixed a quest bug and some enemy AI issues too where they'd just use the wrong stuff. At this point the early game is probably stupidly easy but I'll save that decision when I can subject a friend to play the game from scratch. At this point 80% of the content is playable in a coherent fashion, if I can bang out the final dungeon enemies out I can probably get 'em to play through all the way to the final boss. If that checks out (lol) it's just adding some wacky final boss death animation and fixing some credits stuff.
Craze

Close
05/03/2017 01:43 AM
i use far too many index cards and old envelopes to keep track of shit like this. i make charts more than i make actual games

what weapon did you have too much of?? and how does that happen?
V3xatious I play EvE Online, and make a ton of spreadsheets. Oddly, it's helped on the development side of things. Organization for the unorganized is the holy grail.
FluffexStudios
109

Close
05/03/2017 07:24 AM
Currently play-testing and brainstorming what area I can improve on for my horror adventure game Stitched

Close
05/05/2017 05:53 AM
I just finished working on 3 maps! For some reason I worked really fast today. Usually each map takes about 4-8 hours for me to complete, depending on complexity. Today 3 maps took me 6 hours, probably even less since I did some random things, and took breaks.
Kyoui
49

Did some work on making a flashlight visual, combined with mouse aiming. Now I just need to learn some spriting to make a 8-directional sprite for my actor, to make it look less akward...
NTC3

Well, all of these sound good, obviously (especially the last one, since I always find enemy variety a significant advantage for any game), but it's clearly too general-sounding to say anything else.
Fayte

Close
05/07/2017 03:27 AM
just got home from an 8 hour meeting with the team. TONS of progress has been made on the card game. I'm currently creating more cards until our next meeting.
Rebezion 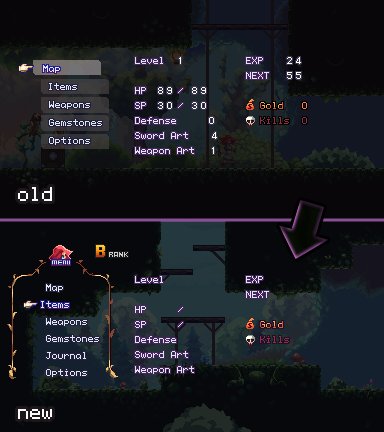 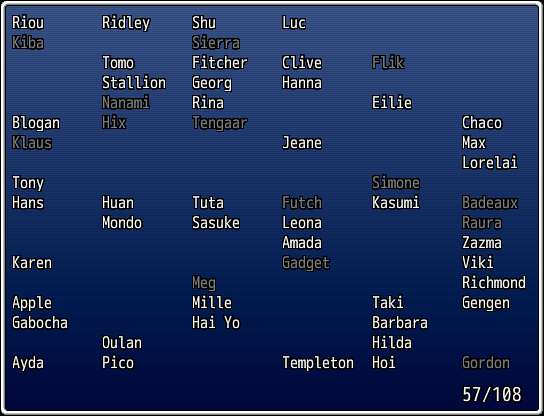 author=Marrend
Initial Tablet of Destiny is a go!

what are we looking at here?
GreatRedSpirit

It should be weapon type: Simple Daggers that everybody can use, grab bag of melee weapons, ranged weapons, and magic weapons. There is no fundamental difference between them except what characters can equip. I ended up with 20 melee weapons compared to 8 ranged, 8 magic, and 8 simple. It happened because I'm horrible at making games and have no actual idea what I'm doing most of the time. Everything I do is random and scattershot not because of some overarching vision but because it is a basically random and scattershot approach to game design.

Basically a list of recruited characters. The Tablet of Destiny from Suikoden was a grand list of what characters out of the total 108 recruitable characters you've acquired. It also tracks which ones have died by greying them out. Blanks are characters yet to be recruited.
Marrend

Basically a list of recruited characters. The Tablet of Destiny from Suikoden was a grand list of what characters out of the total 108 recruitable characters you've acquired. It also tracks which ones have died by greying them out. Blanks are characters yet to be recruited.

Yep-yep! Though, there's typically more going on with this screen than merely a list of names. Like, you can check the status of a character here, if they are still alive. Also, what Star of Density they are guided by, or represent, as based on the classic Chinese novel, Outlaws of the Marsh Water Margin.

*Edit: I happen to have a screenshot of Suiikoden 3's instantiation of the Tablet in my locker: 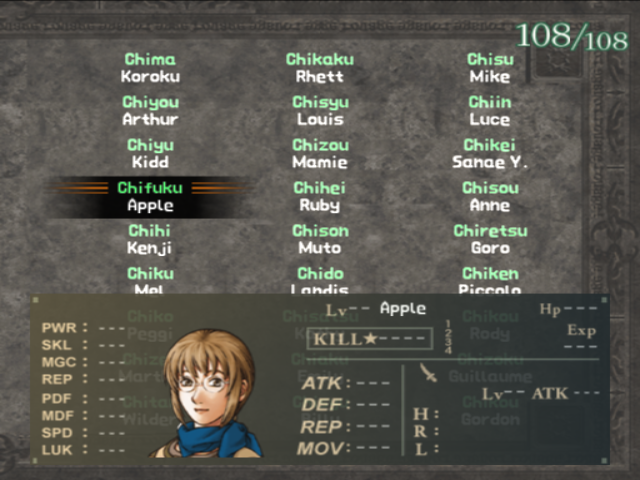 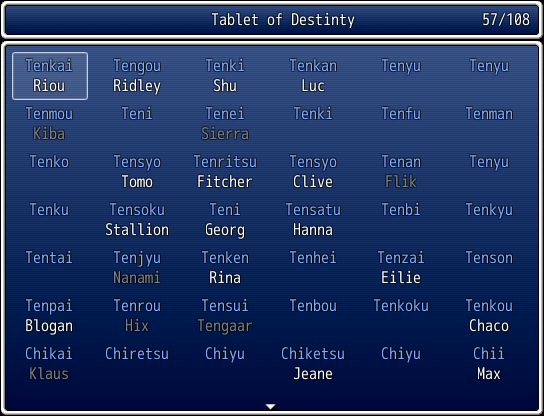 Now, none of these cells (for a lack of a better term) do anything, mind, but, I figure I've got to do it on a case-by-case basis. Could still use a bit of tweaking, as using Page Down can show a half-empty screen, but, hey! Progress!
GreatRedSpirit

Close
05/09/2017 05:41 PM
I made another excel: Status afflictions and how many sources there are for each tier of dungeon/enemy. The idea was to make sure I had an appropriate spread. There isn't much use for Ailment X recovery or immunity items if they're never used. Everything looked alright but I never weighted them based on frequency of a source or anything like that.

I also ended up changing Silence. Before it would just prevent using magic attacks, now it prevents using any skills that cost MP. Now, all PC skills cost MP but not all enemy skills do (since enemy actions are 90% skills) so silence would mostly affect their stronger/signature attacks that would use MP. What does use MP is totally inconsistent though since it's also used as an awful AI management for some other enemies. It's basically a mess since they gutted enemy AI after 2k3.

Actually, writing that up I don't know if silence is even a thing a PC can inflict!
Arcmagik 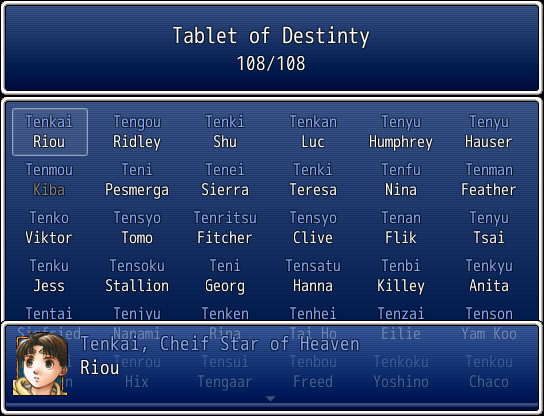 With this screen-shot, I was thinking there'd be a one-line blurb about the character that lies below the character's name. Though, I could (probably) figure out a stat-box akin to the Suikoden 3 screen, above. How to handle stat-boxes for characters that do not fight might be interesting to figure out!
Marrend

Close
05/11/2017 03:00 PM
A small bit over the 24-hour mark from my last post here, but, I think I've drawn up a very simple Unite system? The way it works so far is that the Unite command is a party-wide command, and can only be used when there's three or more people in the party. Maybe I should make it two.

I figure there should be some other condition to this command. A cost, as it were. I'm thinking the party accumulates some kind of resource (Unite Points?) every turn, and/or by winning fights. I think Suikoden 4 did something like this too, but, I forget what they called it. Was it "Rush"?

Anyway, the Unite command I just wrote uses a certain amount of these resources according to how many people there are in the party. So, a three-way Unite cost 3 of these points, while a four-way cost 4, and so on. In theory, this cost differential should balance out the sheer power of the move.

However, accumulating this resource could still be an issue. As of now, I have both per-round accumulation and per-battle accumulation, and part of me thinks I should make it one or the other. Or, have the cost much higher. Like, I'm going off Suikoden 4's "Rush" concept really hard here, and I think you could do a "Rush" in that game, maybe, every 10 or so fights? I don't recall. However, that's about where I want to be, but still have a mostly-variable cost.
Pages: first prev 263264265266267268269270271272273 next last
Forums :: Game Design & Development
Back to Top