Meanwhile, I'm sure quite a few of you have already seen this image, but I keep reposting it for people who haven't seen it yet, so I might as well just put it here. Basically, whilst trying to study for an exam, I couldn't resist fitting in a little bit of effort to construct scenes and try to materialize an overall plot for this perhaps-too-ambitious-but-might-turn-out-awesome RMN community fangame.
Rine

Close
06/23/2015 04:02 PM
Alternating between working on the main 'mission control' section of my as yet untitled game, and tightening up content. Today I got my R&D section working and ready to insert upgrades, and thanks to some help from the forums here, I have my mission-porter script working.
facesforce

Close
06/24/2015 10:40 AM
After another long hiatus from RM Game Making, I have once again dived into the world of ascii, and I have developed a event based combat system, that is so bloody circumstantial it drives me crazy.

This basically becomes a series of both characters dancing around on screen, forcing the player to observe and think of possible ways to take advantage of the battle, all in a text based, ASCII rendered world. But it's a nightmare in eventing.
BizarreMonkey

I also updated the HUD and Windowskin, the HUD is now much easier to keep track of in the peripheral, and the Message box pattern blends better and looks overall just nicer. 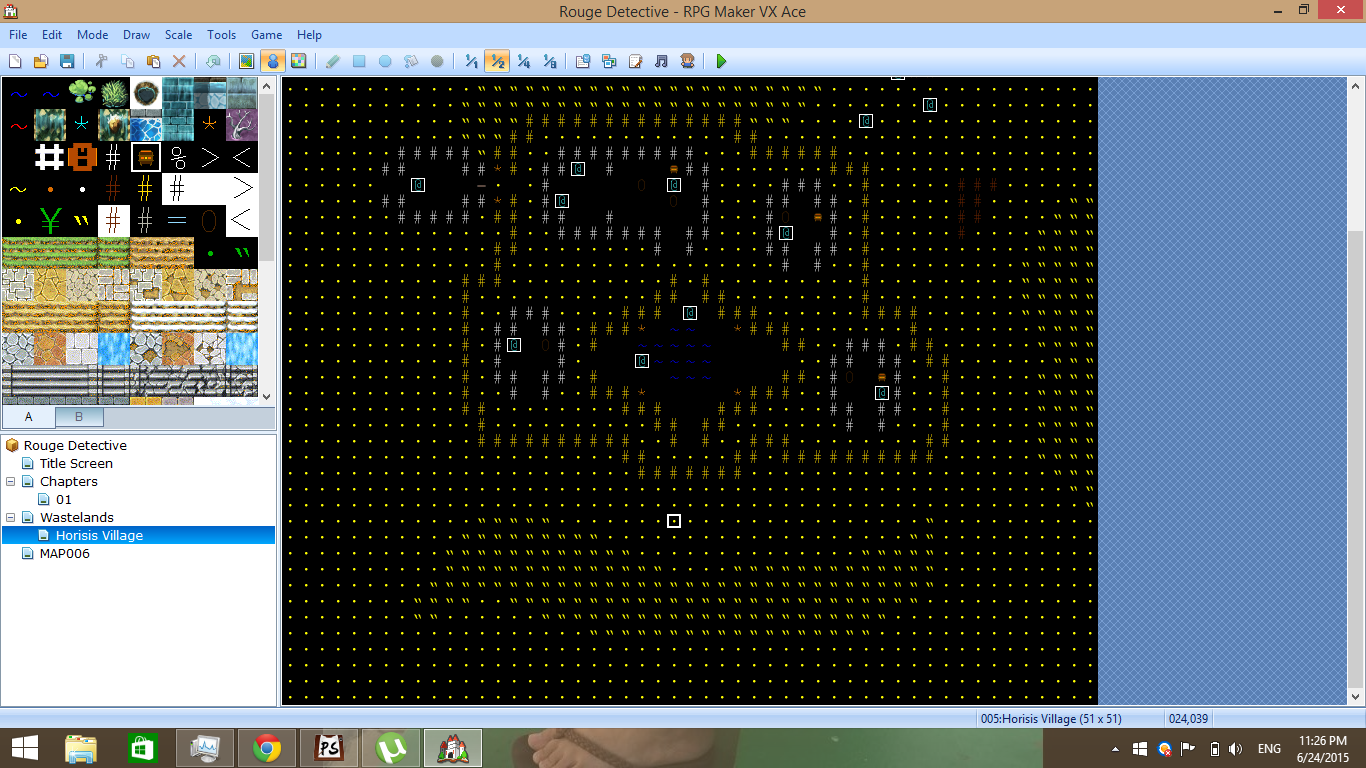 So many might remember my Ascii stylings in rmvx; I've updated to ace, and am designing a 5x5 map of 50 squares, a exploration based game with resources limits, and a difficult to recover health system.

This is the village of Horisis in the center of the Vernol wastes, and will act as 1 of 2 bastions of civilization. I will release a demo once I get 9 maps made.
The " sand is quick moving sand, and can be used in the combat, but here is used by the village made of tents around a ruin and oasis.

EDIT: Originally, this was going to be a literal adaption of "The Long Goodbye" by Raymond Chandler into ASCII, thus why it's called "Rouge Detective".
Rine

Close
06/26/2015 08:26 AM
Working on hammering out weapons, armor, unique skills, biographies, and stats for my first ten characters in my game. Easy to churn out, but taking a lot of mental energy to come up with new things constantly.
Frogge

Close
07/01/2015 11:17 PM
Oh well I think I can join in on the fun ^^
This is my main project, the idea is there are a bunch of hooded men invading a house and you have to find a way out without being detected. And this is an excersize game. If you look behind you, you will die. It's a game based around the candles game. Now I have to have every map I make cater for the "Impetus", which is a very unique and special weapon. The Heights of Dev.
Lucy_Fox And now I'm going to start the last and final chapter. \o/
There are also some techniques that have to be reworked ._.
Aegix_Drakan

I made a game in the last month, and now? Now I'm working on recovering. I'm suffering from total burnout.
Rine

Close
07/03/2015 03:16 AM
Working on finishing up my initial set of characters for my game, before I start some missions. Planning to do a character balance playtest by the end of next week. Each character has their own unique weapons/armor, biographies, class, 5 skills, and research upgrades...thankfully I only have about 5 or so left before I'm finished with my current ideas.
captainregal
1356

Close
07/03/2015 04:03 AM
I have an Npc in my game that follows the player around from town to town. She gives the player Alchemy Quest to complete. Before they quests were gated behind completing the previous quests in order to receive new ones. Also you always had to return the the original town to turn in the quest. I just finished making it all very dynamic so that you can accept/turn it any of the previous quests in any town. Next up is making the Guild Hall side quest line also do the same thing. Whew. It took a lot longer than I thought it would.
Red_Nova

Close
07/04/2015 05:28 PM
Shaving down some unnecessary scripts by writing my own. Well, I say "writing my own," but really I'm just overwriting many of Ace's default functions. I'm writing a sort of "utility belt," script that compiles many smaller functions (retain experience on class changing, adjusting max battle members, etc.) into one location that I can edit as I please. I'm curious: If I got enough of these functions together, would anyone find a use for such a script? I'm not writing anything new, just making life a bit easier from a development standpoint.

Also, I just discovered a life changer: if $TEST and if $BTEST

That allows functions to occur only if you're in a playtest or battletest. Since my current project only allows saving at specific points, if $TEST is super helpful! Now I can save whenever I playtest the game and not have to worry about manually removing the save command every time I upload a build. It's... so beautiful *sniff*
BizarreMonkey Now I'm working on the third and final Esperia Bossfight. It's gonna have like 4 phases and be absolutely nuts.
Sated
4005

I decided to add "Loci" items that modify stats and allow characters to learn skills, which was all well and good until I realised that the skill "Loci" will require me to do this for every hero (x14) and every skill I'm adding to these items (x16) >_<
bulmabriefs144

Close
07/06/2015 04:29 AM
Testing the final ending of Oracle of Tao. I finally got through with (mostly) no bugs. The Link To Event seems to be the extent of it, though it annoys me, as the ips doesn't seem to stop it.

Playtime 21 hours. Mainly because I knew I was doing, skipped the sidequests, and cheated on grind.

Next, I'm gonna add a few more scenes in for Selqui, and I may as well call it complete (well more complete).
elmerg
0

Close
07/06/2015 05:18 AM
Just getting back into RPGMaker 2003, and trying to relearn/improve my mapping skills, so I'm looking at things people have built with various chipsets on various games.

The game I'm working on is an amalgam of tabletop RPG ideas I haven't been able to run with or can't fit (the concept is built around a world where war ahs been put aside due to the monster population and, in an effort to curb that, the world has founded a number of academies that train adventurers, who either do freelance work as Hunters, or get recruited into the military, and the game centers around a graduating class from a particular academy, and their misadventures in the world).
Frogge

Close
07/06/2015 10:54 AM
That actually sounds a lot like Forever's End, elmerg, not that I would know since I just began playing it and I'm no longer than 1-hour in. Mapping with rpg maker 2003 can actually be quite tricky, I'll admit, I think mapping with ace is a bit easier and the engine itself is more beginner friendly. And here's a cute little girl named Annabelle: I improved quite a lot tbh, but I still cannot draw anything like I have in mind.
Also for the sake of comparison: It's supposed to be a bust for the little girl.
captainregal
1356