A random fight scene for our game. which is scrapped.

A random Hyper light drifter fan boy which was our first and proper animation.


I'd show you all the rest but It's too embarrasing.
We currently stopped animating due to lack of tools and time constraints (I don't have a digi graphics tab and I'm still a high school nerd.)
Now we're currently focused on Spriting.
Which we are not good at.
Here's a sprite of the red hair guy on the fight scene above.

Our game will feature the Cliche sideview battle system and will be filled with badly animated fight scenes and worthless NPCs and an uninteresting story.
(That was sarcasm.. We will definitely work hard for the gamers out there.)
We might release a MGSV Ground Zeroes kind of teaser to give the players a feel for our upcoming game.
So yeah.
Thats what I-

WE have been working on.
Check out our deviant art!
http://pixelperfectheroes.deviantart.com/
It's not much but it's still worth checking! 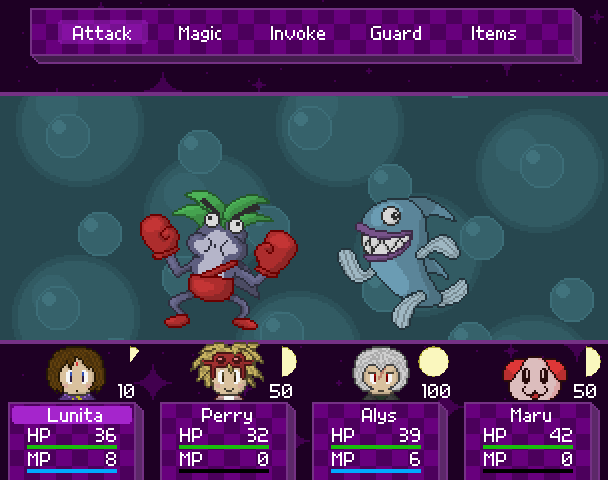 Re-arranging my battle UI. Now instead of one long window at the bottom, each actor has their own window. And a little moon that acts as the TP gauge.
Sated
4005

The right-hand enemy looks like something from Spongebob.
Thighbone
275

author=Thighbone
What am I working on?

author=Thighbone
What am I working on?

That is so meme material..
Allow me.. 
This morning I was implementing a BattleEvent class for Bossgame! It essentially covers what Common Events do in RM - I need a way to be able to interrupt the battle for cutscenes, summoning new monsters, etc. After that and a few other tweaks, I should have at least one fully-playable battle implemented in Unity.
Deltree
doesn't live here anymore
4556

Close
10/26/2016 02:59 PM
Prepping a demo build to submit to PAX East for booth space next year. Should be finished tomorrow (just waiting on a couple more art assets first). Then, I'll debate on whether to release it publicly and probably stress out over that for a week or two.
Marrend

Close
10/26/2016 03:23 PM
I should do some mapping for Might be Magic if we're serious about picking it up again. I've made at least a few attempts at making an area that transitions between Wornville, Freegrove, and Gradin, but, it always fell flat.
slash

author=Deltree
Prepping a demo build to submit to PAX East for booth space next year. Should be finished tomorrow (just waiting on a couple more art assets first). Then, I'll debate on whether to release it publicly and probably stress out over that for a week or two.


How far ahead of the event do you have to submit a request? I wouldn't mind applying to PAX West next year, but IDK what date I should be looking for...
Deltree
doesn't live here anymore
4556

author=slash
How far ahead of the event do you have to submit a request? I wouldn't mind applying to PAX West next year, but IDK what date I should be looking for...

PAX East submissions are open until November 4th, and the show is in March. They opened some time earlier this month. I'm guessing PAX West works in a similar timeframe; I will probably submit to that one as well when the time comes.
Marrend

Close
10/27/2016 12:03 AM
So, I've been fiddling around with a gimme-a-random-game-to-play program with VX Ace. Maybe not the most efficient way to make a program like that, but, whatever.

My initial attempts was to just define the game-list as an array in the script itself, and comment out games as I play them. However, I think I've got the array to read from an external file called "game_list.txt", and ignore lines that start with "//"!

Close
10/27/2016 12:33 AM
I'm taking a break from Steel Spirit SaGa to work on a small game based on a game I was making ages ago. It was a game that was akin to earthbound in style of story (an overall dark and serious plot with a few jokes to lighten the mood), and I thought some of the jokes I came up with were pretty cool, so I decided to completely rework the story but keep the jokes intact.
JosephSeraph

...Or wondering if I should just move to Construct 2 instead...

(btw this is NOT a Platformer with RPG elements, it is an RPG whose movement style is sideview, so it is more focused on RPG elements than it os on Platforming elements.)

On my end, finally got Reimaden done, and also got True Pandaemonium done right off the bat. Just have to test the actual enemies and bosses on my next runthrough of the dungeon to make sure things aren't too bad, and then it's onto the next dungeon which is already set up outside of monsters and one puzzle that I still haven't gotten set up. 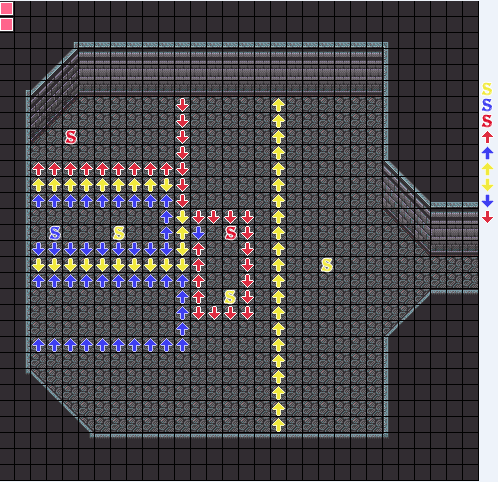 Some of you may remember this from LONG ago. I still never finished this darn thing. There's this room, and then the room on the opposite side just 2 rooms away. I feel the rooms themselves are probably too small for a good puzzle back and forth between them. Of note, the dungeon is the main entrance, these 2 puzzle rooms, the main area with 4 side rooms, and then the final area. It's actually EXTREMELY short, so I feel that having the puzzle rooms bigger might help. I'm bad with making them, so anyone got any good suggestions? It's on of them tried-and-true switch puzzles. The ultimate goal is to lower all 3 colored switches so that you can get to the switch that lowers the spikes in front of the door in the main entrance area. This switch is on the right side, surrounded by a ring of the 3 main colors. I'm thinking of having it so that there's a hidden passage or two between the rooms that you need to utilize in order to even get to specific switches or whatnot...@_@


(Anima is gonna be fun to test if I ever fight her. Oh boy...can't wait to make Warmech a nightmare to fight in this upcoming dungeon too!)
Chilly-Pheese-Steak


Thank you. You're stuff is looking amazing a always. 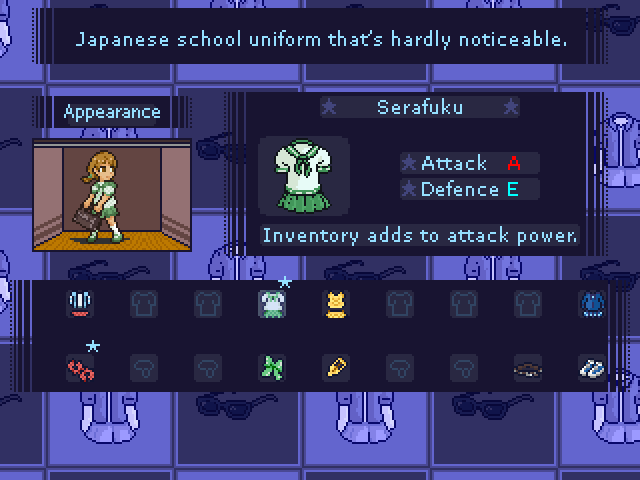 Because it really is a solid battle system. Mostly just need to replace/fix a few Skills and Passive Abilities (some are too OP or useless), and see if I can make the "economy" of the game feel more fair or balanced (You can spend points you earn in combat on small advantages in the next round). It feels kinda wonky right now.

...I am totally going to use that "Pass the ball" ATB mechanic in future MV games that use the ATB system. It makes a remarkable amount of sense (A character can skip their turn to instantly charge up an ally's ATB bar by 25%)
JosephSeraph

also that looks quite daunting to code chilly! but that's hardly surprising as you're making some really interesting and neat stuff, not to mention the great pixel art! And thanks! <3

I'm so damn excited for the new 2k3 patch.
I mean it'll also allow us to assign pictures to specific layers. That means...
...MULTIPLE PICTURE PANORAMAS! So I could easily do scrolling clouds behind the chipeset for instance, or someone with orz great mapping skills could make unthinkable things!
Pages: first prev 254255256257258259260261262263264 next last
Forums :: Game Design & Development
Back to Top