author=CashmereCat
Wait, what? If so, that's amazing! I love it. I was going to create an RPG called Lyne where you could only travel along the y-axis (e.g. you couldn't move left or right). I still might one day ahahahaha

You're off your game. You were supposed to call it Final Fantasy XIII.
Liberty

Close
12/18/2014 01:23 AM
There's an RPG like Mario where moving right will move the screen edge and you can't go back to an area once it's off-screen. It's rather interesting, actually. That said I can't recall what it was called, but it is on steam.

author=LockeZ
Wait, are there east-west exits to other maps, or is the entire game a single 20x31780 map?

I'm actually thinking it's a bunch of 20xwhatever maps that lead to one another. Same thing in essence but a hell of a lot less laggy. XD
Christamoose

author=CashmereCat
Wait, what? If so, that's amazing! I love it. I was going to create an RPG called Lyne where you could only travel along the y-axis (e.g. you couldn't move left or right). I still might one day ahahahaha

You're off your game. You were supposed to call it Final Fantasy XIII.


Wouldn't that be Final Fantasy |? You got your towers and they cool looking. You got your puzzles and they inspired by Account Mu. You got your crates and they polite nuff' to be pushed. You got your rails and they two-ways.
Liberty

Close
12/18/2014 01:33 AM
The rooms are pretty bland and boring. You could probably add more in there and still have them work okay. I mean, the outside looks like the layout is circular in nature, but if this is all there is of the insides, they look pretty square.

Consider what the tower was supposed to be for. What's its story? Did it belong to a mage who used it for experiments or was it designed by a malicious trickster who set up traps all over? Maybe it used to be the holiday home of a king before it fell in to disuse? Currently it just looks like some random person installed a few books and said 'puzzle ahoy' for no reason at all. It works from a game-play standpoint but it doesn't really look interesting.

Also, on the first map, you might want to give the tower a top or use shift mapping to keep the edges of the tower so that it doesn't look so weird. Like so:
Show Close
12/18/2014 01:38 AM
YES MUST DO.
Also if you're interested
the story is a man named Xavier and
his admirer Jade building a tower
because Xavier's father told Xavier
that after he died, he wanted Xavier
to finish the tower he'd been working
on so long, and he told him that in
the top floor he'd need to hide the
Artifact of Life so it wouldn't
fall into the wrong hands.
Storyline! Plot! Yaaay!
BizarreMonkey

thought i was the only one who did weird shit like that.

I'm a touch nostalgic for the set-game-screen size myself, being a purveyor and religious fan of both Epic Battle Fantasy 3/4 and Oddworld: Abe's Oddysee and Oddworld: Abe's Exoddus. It does have it's advantages, first since you don't have to worry about the camera moving, you can be particularly presenting of the details per screen, and if it's a world you love building, it's a good way to build it and extrude the emphasis on details. As a more fresh developer on the scene it's also a good way to seperate puzzles and give them direction while also keeping the world intact. because the transitions in Oddworld have sound that only adds to the atmosphere, it actually increases immersion rather than takes from it like you would imagine taking apart the seamless nature of 2d platforming would.
Craze

LockeZ
Wait, are there east-west exits to other maps, or is the entire game a single 20x31780 map?

split up into a bunch of 20x100ish maps, with 20x13 taverns to rest up in. some dungeons are multi-layered; even this desert has a few caves. however all "exits" are north/south, even on multi-layer maps!

thought i was the only one who did weird shit like that.

oh please i've been doing these odd visual stunts forever. i was a ta for a cinematography class in college, specifically a seminar on coen brothers films, so i believe i have the right to say "hon hon hon *swirls wine* *twists moustache* i'm more pretentious than you"

in this case, it's because the game is a pilgrimage from the south to the north. well, less "pilgrimage" and more "hunting down terrorists," same difference

CashmereCat
Wait, what? If so, that's amazing! I love it. I was going to create an RPG called Lyne where you could only travel along the y-axis (e.g. you couldn't move left or right). I still might one day ahahahaha

see above... also, that was my original idea for this game before i decided that was boring as shit (also before i ironed out my actual game structure and plot and realized i would want proper cutscenes)

Liberty
I'd recommend removing the green ground tiles (short grass - not the sandy grass) unless there's a lot of fresh water nearby. I'd also make a 'path' to the top tent - that is, get rid of some of the grass in front of it, as people would be walking there and thus wear the grass down. Same with the point between the road tiles - if people are still walking those roads the grass won't have had time to grow, and there's still foot traffic, so...

Otherwise it looks perfectly fine. I mean, you could always add more indents I guess, but it looks like it'd work for what you need and it's varied enough that it doesn't seem empty - which is usually an issue with maps like this.

yeah i didn't want too many indents or else it'd start to look artifical. i took your pathway advice, but i'm keeping some of the grass because it's meant to be a sort of patchy approach to the plains. i'm not sure it's actually realistic but it looks nicer than just yellow haha?

touched up that bottom part a little. here's the full map, i haven't done chests or side-events yet, i'm just mapping and hooking all the teleport events together atm. that northern space before the building is a bit sparse because the focus is a short scene that takes place there -- i wanted to draw the player's eye to the person that starts it up

Close
12/18/2014 02:26 AM
You could probably decorate around the edges of the northern part a bit. That would create a natural contrast to the emptiness of the middle and draw more focus there (while also making the area look a little less empty). ;D
I'd recommend a dirt path to the hut/building through the green. Even a bit broken up it'd at least look like some traffic goes through (since grass gets trodden on and dies, leaving dirt behind).

That said, it's looking good.
CashmereCat

Close
12/18/2014 02:58 AM
@Craze: Oh. Wizardsong was the idea that I was thinking of. It's been done. Waaaaaaaah. Speaking of that, I hope there's another Epic Monster Dungeon Explore! on the very distant horizon.
Max McGee

There's no way to be sure without whipping it out and measuring it.
ESBY

Colour of the day is purple. ESBY
@Craze - I really like that, giving yourself odd restrictions is the way to go.

Well, they're not entirely random. Visual and control gimmicks are meant to enhance the themes of the narrative. It's not unlike the screen going red and darkening around the edges as you lose health in a shooter -- it enhances the experience at the cost of making the game slightly more difficult to manuever. In Wizardsong, you literally cannot go left, as I hard-coded it out of the scripts. It's meant to show the duality of manthat these characters can never back down from their choices, even though it makes the game harder to control for the player. (Please note that iirc, I made Wizardsong in early high school so it sucks.)

AnYwAy, while I agree with Liberty that the screen looks pretty blue, it's definitely a nice shot. =)
CashmereCat

I'll be honest and say that I post about 75% of what I make. It's because I make very little
Liberty

Here, have a screenshot because why not? The sprite is nice. But that's just RTP mapping there. Decent mapping, but still RTP.

I followed some of Craze's advice and am working of my trees. 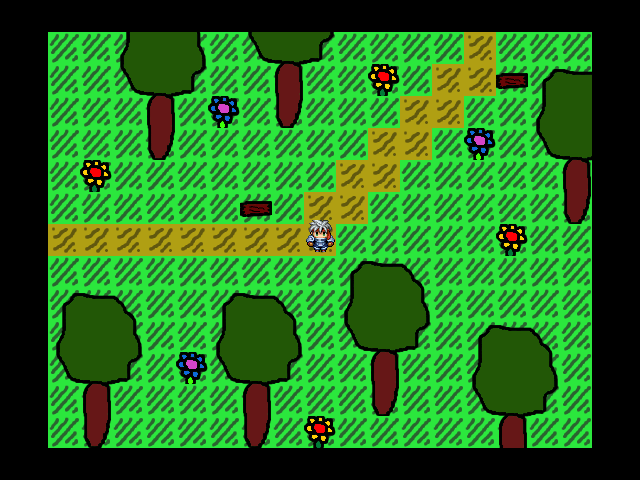 Close
12/18/2014 03:55 PM
And what is wrong with RTP mapping? Not a damned thing, my friend. Some of us prefer RTP. I use the RTP a lot and prefer it to most of the other packs that are out there, in fact. The game is an RTP game and thus, RTP mapping is expected.

Your ground tiles are too busy. You either need to make them a lot closer in colour so that the contrast doesn't break your eyes or get rid of them altogether. I'd actually recommend toning that green down a lot (the lighter green). It's harmful to the eyes. >.<;

A lot softer and less harsh on the eyes. It also comes across as less busy because the colours aren't so contrasting. This also makes the trees and flowers stand out a bit more, too.

I also messed with the black because black is very pop-out. Changed to different colours instead. You could use black outlines for events and sprites and they'd pop out more if they didn't have to combat against other black outlines (it could be a way to show what can be interacted with, even).
Red_Nova

Close
12/18/2014 04:35 PM
Liberty, sometimes I feel like people make short statements bashing the RTP just to get a reaction out of you.

I personally use RTP because custom tilesets are scary to learn. I use other tilesets if they suit my purposes for a particular game, but so far, RTP has done the job for me. I'm trying to figure it out, but I feel like I have a learning disability when it comes to anything related to mapping.

That being said, here's some of my mapping! 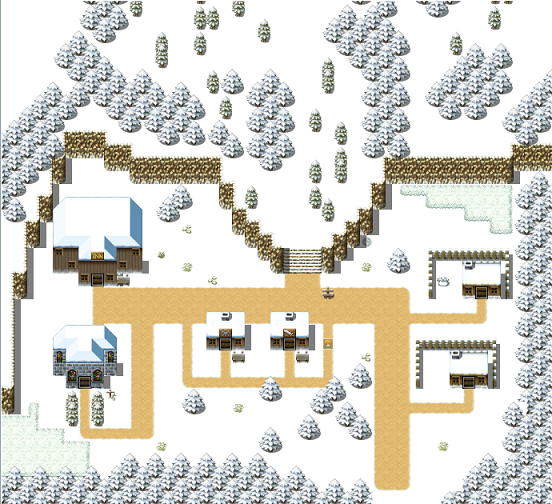 It's for a 10 minute game that I plan to have done in about 4 days. Hopefully I'll get done on time, but 90% of development has been me staring at a blank map trying to figure out where things go. This particular map is mostly a shopping district. It's a linear map, and the player has to go from the bottom up.

Here's how it looks in the game: 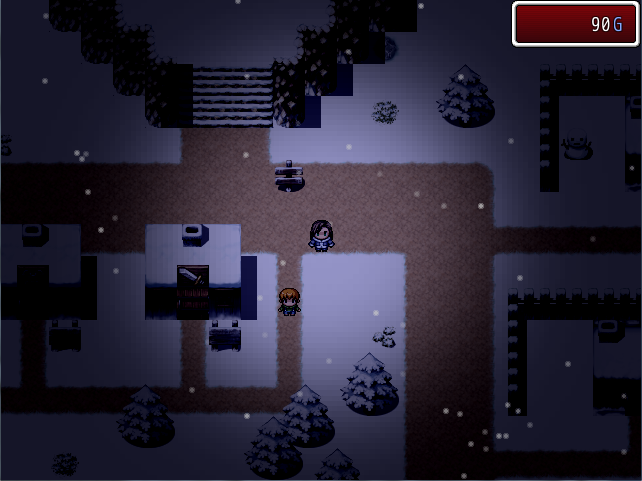