And I thought MY Release the Dead game was a copyright claim waiting to happen.

Game: Jello and the Valley of Duh

Story: You play as Jello, a shiny Jigglypuff that was abandoned by her parents! I thought this was Pokemon themed! Why do people have to traumatize Pokemon? Poor Jello! In the beginning, it's not apparent what the plot of this game is, then you meet Kirby, who is stranded on this planet from the home planet of Popstar, and it seems like it's going to be about getting him home, but then the game seems to mostly lose interest in that. Then you go looking for your parents, and it seems like the game is going to be about that, but then that gets resolved in a single chapter. It really seems like the game's overall plot centers on Jello working through her abandonment issues. They live in the Valley of Duh. I'm not sure where that is, but all signs suggest that it's in Hyrule. Ganondorf and Princess Zelda even get cameos. 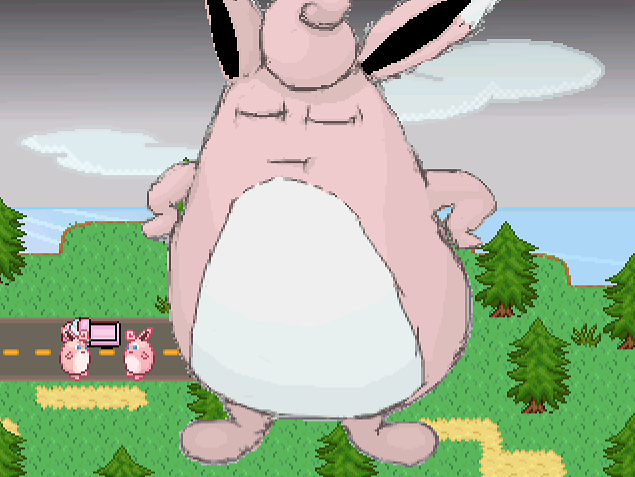 OMG, the artwork is so cute, but this doesn't look as clean as the rest of the artwork in the game, so I think this opening sequence might have
been done in a rush.


Writing: This adorable! And mean! And adorable! And really, really mean! Mom and dad abandon Jello because they didn't like her friends! A Jigglypuff is an abandoned child! There are a few typoes here and there. I didn't really pay much attention to them because there were so few, but one that stands out is that the Jigglypuff in the candy wrapper place, at one point, describes her establishment as the "cnady" wrapper exchange. The story is really engaging even if a substantial bit of it is campy and silly. BUT IT'S MEAN! How can you traumatize a Jigglypuff? ;.; Who has the capacity to do such a thing? It's a Jigglypuff! The cutest of all Pokemon! It's like Kirby watching his parents murdered in a back alley when he was just a child! 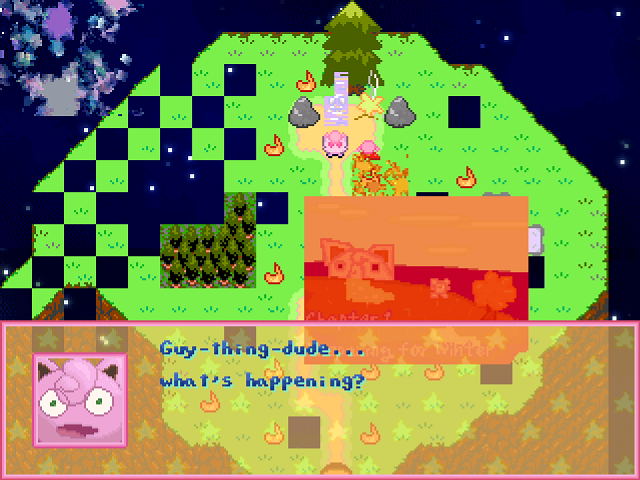 It's glitching out, dude!


Gameplay: This area of the game is surprisingly inconsistent. The characters have a fairly good skill progression that's undermined by the somewhat easy availability of purchasable seed items. This seems to be on a slow EXP progression system making the game a bit grindy in the early levels, then a little later, and then a later on, and the reason I say that is because difficulty is all over the place. On your first mission to find a tree for the holiday party, it takes quite a bit of grinding to get to the next level to make you skilled enough to actually make it through without having to constantly run back to bed. Then, once you've spent a ton of your money on the seed items that become available after the first chapter, you're rather quickly at the point where you're mowing down enemies. Then, once you've made out of the underwater chapter, difficulty ratchets way up as not only are enemies pounding you, but you now have party members that are way lower level than you and you haven't really had a chance to buy seed items for because you went so long without a regular party, you actually didn't realize that that would be a thing and they are far lower in level than Jello at any rate. The combat in this game seriously needs balancing. Crazy hard or crazy easy? Both are fine since the game doesn't make either one impossible, but some consistency is called for, here. Pick one and stick with it, please. 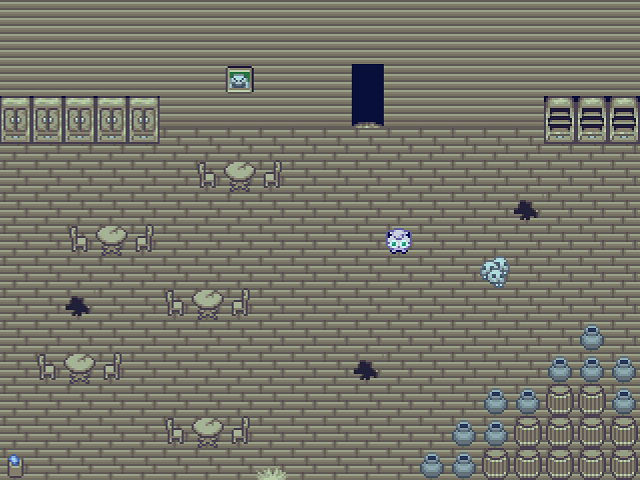 There's a little bit of giant map syndrome going on in the ghost ship.


A few things here:
1. The pirate captain. Does he do anything except stand there and let you pound him?
2. It'd be nice to have a turn-based battle system that lets you breathe and figure out what's going on. I think this is why whenever I use 2k3, I either create a new combat system with events or I just don't use combat. Whether you've got it set to active or wait, you don't actually have the luxury of thinking about what you're doing, and with wait, if you don't select fight fast enough, the enemy is just incessantly attacking you anyway.
3. I know that my stats are a bit juiced from the seed items, but I'm pretty sure a boss that you'll be facing at level 8 should have more than 80 HP (Missingno.).
4. It would be nice if future party members weren't so far below your level when they join. Remember, you start the game at level 4. Raiblo joins at Chapter 4 and he's only level 5. The expectation that you're only going to level up once in what is pretty much several hours doesn't work. I was level 10 when Raiblo showed up and I think Kirby started with me at level 1 when I was level 7. He was only level 4 when Raiblo joined. Jello was entirely carrying these two when all three should have been working together. Then after a single dungeon with Raiblo, he's thrown into one by himself, and I totally got destroyed by the enemies there. 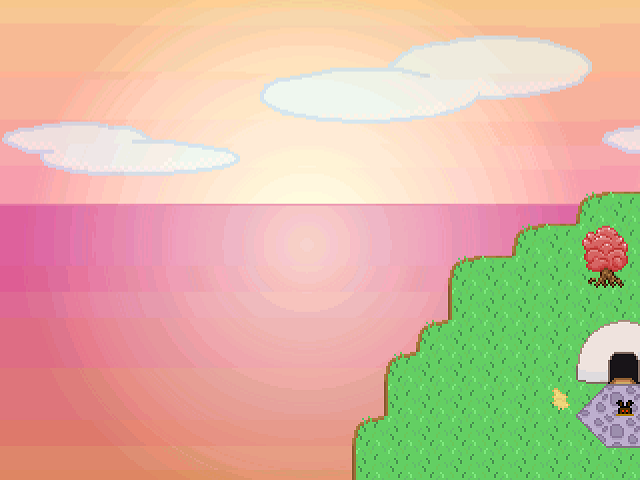 Here it is, the number one reason to play a LavenderSiren game; the amazing visuals!


I'm not going to comment on the broken Drifloon popping minigame since the developer is probably going to fix it and this is definitely just a glitch.

All of that aside, the game manages to be fun as you learn how you want to deal with it. The game is designed in a way that it's easy enough to avoid enemies, but don't expect to have an easy time with bosses if you do that...such as a certain matrimonial beaver...thing...I don't know Pokemon. I grew up with Pokemon Red on Gameboy and the anime series that was on after school cartoons. I'm not a fanatic. I know a few. The game didn't have to tell me that Jello was a Jigglypuff or that Sparkles was a Pikachu, for example. 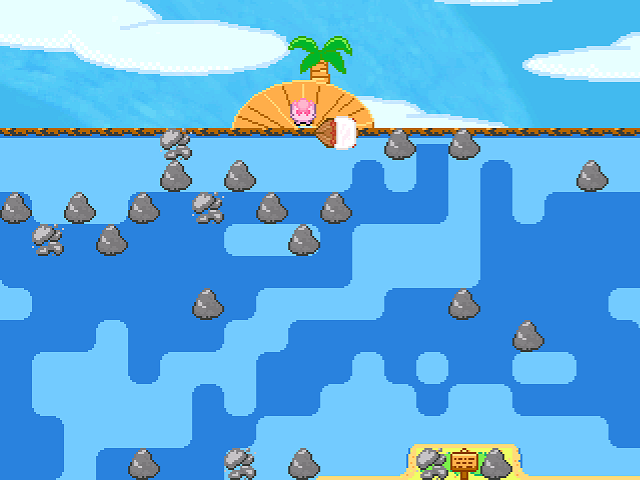 I don't think I was supposed to be able to go here...


Ultimately, this game simply boils down to a series of dungeons with enemies you can avoid where you have to find a McGuffin of some sort. That's fine. I expected more puzzles from LavenderSiren and they would have been nice, but at the same time, knowing how cryptic her puzzles are, I'm kind of glad she didn't.

Graphics: If anyone has the best graphics in the Release the Dead event, it's LavenderSiren. The cutscenes are hand-drawn, AND THERE'S CINEMATICS! AND THEY'RE NICE! I'm not completely sure, but if I had to guess, I'd guess that every bit of these graphics is created by LavenderSiren...except that weird RTP town you go to when Jello basically mashes all the tone holes on the Ocarina of Time where everyone is basically a jerk to Jello, except for the water fairy queen that shows up. And the ghost ship was also RTP. You know, I guess most of the interior cavern walls and water are also RTP. In the next image, you can see that the water tile should have been edited to match the surrounding floor tiles. 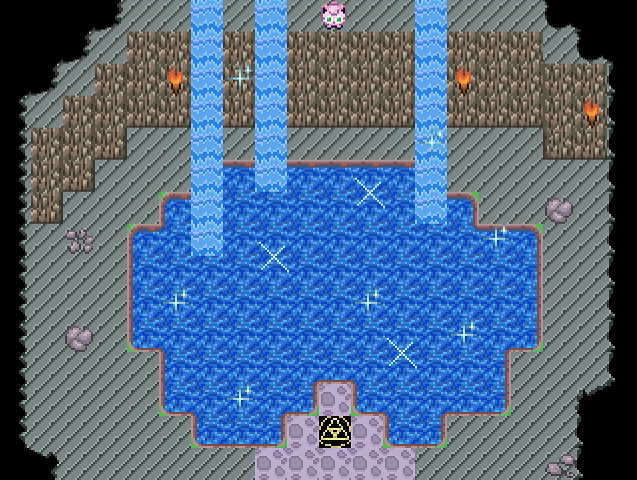 As if there weren't enough games with pretentious religious symbolizm, Jello can walk on water...falls. And ceilings.


Sound: According to the opening credits, if the music isn't RTP, then it's written by LavenderSiren, and it's all really good! I think the only thing that bugged me, at least at the beginning was Jello's footsteps, but I got used to it. I think it could be turned down a bit, though. I would also like point out that music has a tendency to change tempo from room to room. Should definitely look at straightening that out.

Conclusion: This game is so adorable and fun, I feel really bad about giving it any negative criticism, but unfortunately, there's a substantial bit to criticize. I understand that this was very long project that got put on hiatus and then got rushed through a 30-day jam, but still, there are things that needed to be done that weren't that does hurt the game. Paying attention to combat balancing is the biggest issue throughout. I'm going to ignore the broken minigame, though it's a shame I couldn't play it. This game is well worth a playthrough as it is. Its combat system needs a little more development, but otherwise, this game is a lot of fun and really neat. I want to give it four or five stars, but in its current state, I just can't.

Close
11/03/2019 03:37 PM
Thank you for the review!
This was really helpful to hear where all the issues are. Hopefully on a later date I can attempt to balance the combat a bit better (though I could use some help on that, combat balancing isn't exactly my strong suit). I appreciate your honesty wholeheartedly.

One thing I will mention though: his name is Raiblu, not Raiblo.
Kylaila

Close
11/03/2019 03:38 PM
Wow, seems like you had a better time at this game than I did : D Tho it is a neat little one (and I ADORE the terriblu cutscenes graphics).
I just felt it kinda dragged on after a certain point. I thought I'd just have some adventures around Duh Town, but nope, think again. (am in the solo dungeon portion and wondering how much longer it'll take.. I just kinda wanna finish it, though it has a review now already)
Pages: 1