Don't judge a book by its cover

Jello and the Valley of Duh is game about Jello, a shiny Jigglypuff that was abandoned by her parents, and how she goes on many adventures with her friends Raiblu (A mix between a Raichu and an Azumarill) and Kirby (Yes, that Kirby) in the planet Lodoran, inhabited by many different pokemon and even some humans. At first glance, is easy to mistake it for just another weird fan project that only the developer would care about. And in some ways, it kinda is. But judging the book by its cover will make you miss all the colorful graphics, the original soundtrack, and the lovable characters. And if you look a little deeper, you will also find the growth of the developer, both in their skills and in a personal way. But I'm getting a little ahead of myself. 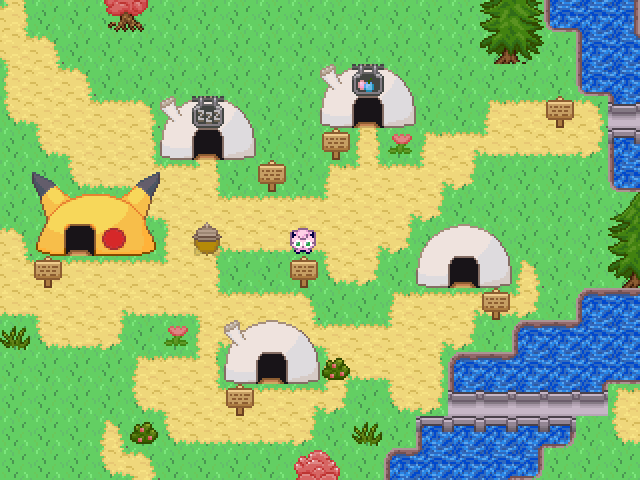 The graphics are definitely one of the strong points of the game. Every place you visit is full of color and charm, and every character, even NPCs, have personality. The maps use a mix of RTP and custom graphics, but they blend pretty well. Most characters also have a custom face set, with most of them looking cute and appropriate (though a few of them, especially humans, look... off.) There are also many illustrations in a few key scenes, with many of them looking great and perfectly setting the mood. You just gotta love every picture that appears at the start of every chapter. And of course, all of this accompanied by a mostly original soundtrack with songs made by the developer, a few from other games and another few RTP songs. There are some really good tunes in there too, I gotta love the Duh town song because you always keep coming back there and is a good tune to feel like you are back home.

But ok, I've been singing praises about the presentation this whole time. What about the gameplay? Well, it's kind of a mixed bag. Most battles are pretty easy, and the enemy's rewards tend to be so low that there's really no point in fighting them. Thankfully, most battles can be avoided, and it doesn't hurt that much seeing as the bosses also suffer from the same "easy" problem. It kinda feels like battles are there because they are expected to be there, but the developer wasn't really interested in working too deeply on them. This can be seen both as a good and a bad thing because honestly, the battles kinda feel like filler at times, and making them quick and easy lets you enjoy more of the story, but more depth could be appreciated. 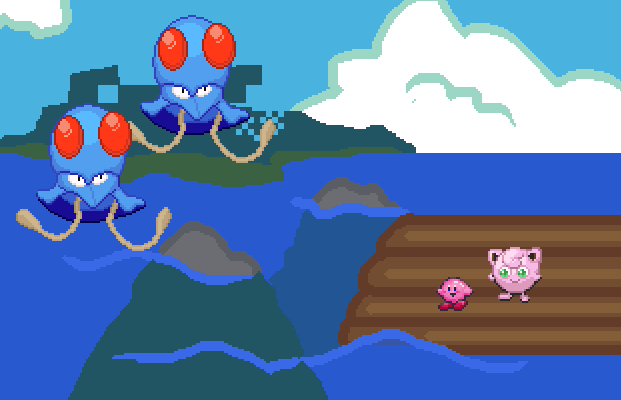 What about the story? Well... before I talk about that, I think it's important to make clear that this game took many years, working on it on and off. With the last two chapters almost feeling completely apart from the rest of the game due to the changes to the tone of the game. One very easy way to notice it is with the pictures before the start of each chapter, with every new one having progressively better-looking artwork. I can really appreciate the growth and changes, both of the developer and, in some way, of our main characters.

And that's cool and all, but what about the actual story in the game? Well... I gotta admit it's kind of a mess, with no clear direction at many points. At the start it seems that it will be focused on Jello's parents, but then Kirby comes and now it's about getting him back home. Mid-way through the game we solve the mystery of Jello's parents and then we kinda get lost for a pair of chapters until the plot picks up again until the end where the tone of the game takes a dark turn. Don't get me wrong, individually, each chapter contains its own story and are fun on their own. You don't ever feel that lost, but when you look at the whole picture it can be a little confusing.

Also, there are a few moments that leave you thinking "Wait, are we doing this now?". Without spoiling too much they are mostly crossovers with other games. I'm pretty sure that back then it sounded like a great idea to add many references to your favorite games, and why should I blame them? I'm sure that many of us did that in one way or another in our early game making days. And they aren't really bad sections, though I admit that they kinda drag the game more than necessary. 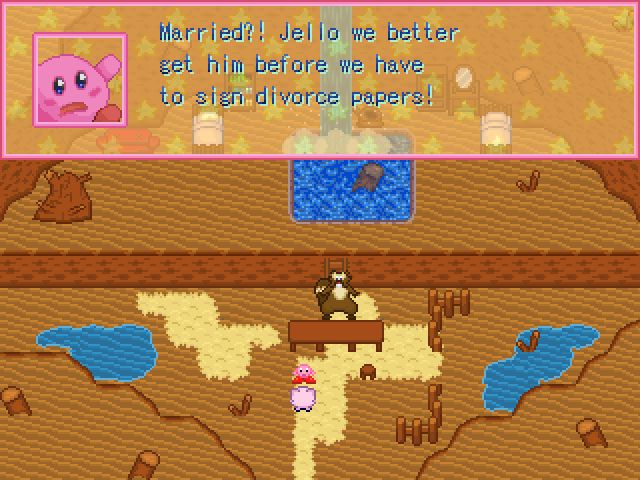 Overall, I really enjoyed the game, a lot more than I expected actually. It isn't perfect by any means, there are many little bugs and quirks here and there, plus many issues with the pacing and the gameplay, but the overwhelming charm of the game won me over. I believe that this is the result of many years of work, of innocent days long gone, of little past dreams and a dash of newer experiences. It is a product of love, and I respect that.

Close
11/17/2019 03:39 PM
Thank you for reviewing my game, and helping me with debug. I still got endless debug on this game (despite release. Yes, I know it's a cardinal sin associated with the state of the video game industry nowadays but I was given one month to finish a game which has more typoes and inconsistencies than level 8 content!) but hopefully I can put it behind me eventually.
Thank you tho.
El_WaKa

Close
11/17/2019 07:19 PM
No problem! I think I was a little generous with the score compared to the other reviewers. A big difference though is that I actually finished the game. A lot more stuff happens in the second half that, while it's also random and nonsensical, it keeps carrying the same charm, even in the last chapter.

And that's what it boils down to me, really. The charm. I'm willing to ignore most writing and pacing problems just because the game is cute. (Which are understandable problems due to the nature of the game and its long development time) Plus I take into account that future updates will polish the game a little more.
Pages: 1