Charming, with some issues

Brief Note: This is my first time writing a review, so sorry if it is a bit off.

Jello and the Valley of Duh, by LavenderSiren, is a charming game, although it has some issues.

- Story
You play as Jello Purin, a shiny Jigglypuff, in the planet of Lodoran. The story is charmingly lighthearted and most of it fit very well, but at times it can feel off with how it treats events, like
Show
how Jello's parents reconcile wit with Jello almost instantly despite having abandoned her and blocked her memories simply because they felt like it was the only thing they could do.
Throughout the story, you will also be joined by Kirby and Raiblu (a Raichu Azumaril combination), who both have their own stories as well. The story is largely humorous, but has well done serious moments too. The ending scene fit very well with the story.

- Gameplay
The gameplay is mostly good, but the difficulty was somewhat chaotic. There were areas where every enemy was weak and battles were easy followed by areas with significantly stronger enemies with missing party members. Despite this, I never really had to grind, which I prefer. The combat system gave enough different skills and options that it did not get boring, and the enemies were fun and varied. Although the difficulty was weird in some places, I largely enjoyed the combat system. 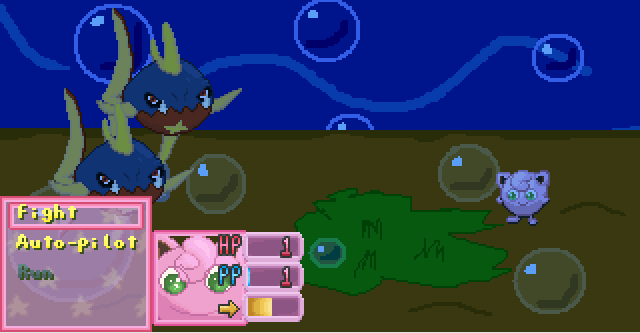 A battle with Jello against two Carvanha that has gone extremely poorly.

It is worth noting that there were some minor glitches. For example, in the first few chapters, re-entering certain rooms would trigger a repeat of the dialogue from the first time you entered the room. Another time, when talking to the Drifloon in Whisperton, Jello's dialogue appeared even when Jello was temporarily removed from the party. 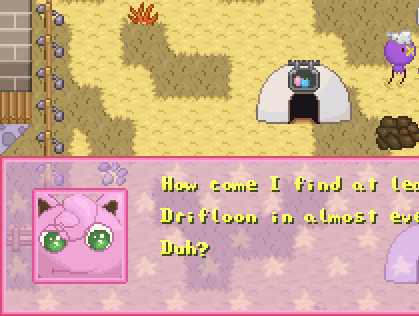 Dialogue from Jello, who was not currently in the party.

None of the glitches I encountered were especially bad, and they did not detract from the experience too much for me, but they may be frustrating for others.

- Graphics
I enjoyed the graphics quite a bit, and it even had some neat animated spots. Places like Duh town looked lovely, as did the characters. There were some parts that did not quite fit together, with things like water tile borders that did not match the tiles around them, but most tiles did not have these issues. A lot of the tiles and characters were made for this game, which is appreciable. The one thing I did not like is the text boxes, which are yellow text against pink. It is still readable, but the combination of colors is makes it harder. 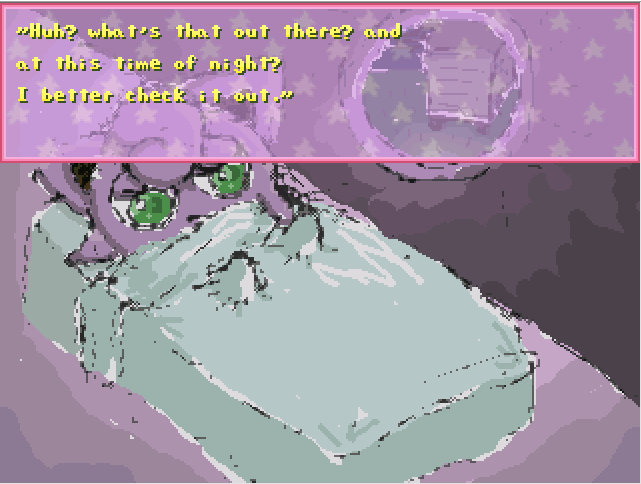 Scene from opening of the game.

All in all, Jello and the Valley of Duh was a delightful game. It had some minor bugs and story inconsistencies, but the characters were usually really well done and the graphics fit will with the story and looked good. I would recommend playing it.