Good morning!
Today's game is Blank Space by Muffle, made with RPG Maker VX Ace on 10/04/2017.
This game can be defined not as an adventure but rather as a visual novel or walking simulator, as we play the role of Annie, a lonely girl that lives inside her bedroom, a bedroom with no exit door (not an oversight but accurate representation of the young girl's state of mind)!

Even if her bedroom seems to be the only safe place for her in the world, interacting with the various items will lead to some flashbacks: these aren't visualized but just told through the use of dialogues, and will give an idea about her current emotional state. Then there is a final part in which she has to walk along some corridors where she'll meet many of the people that criticized and hurt her, encouraging her to "leave a blank space" for someone else and committ suicide. This part is haunting due to the progressively slowe and slower movement of the protagonist but it's near the end of the game that won't last more than 6-8 minutes. 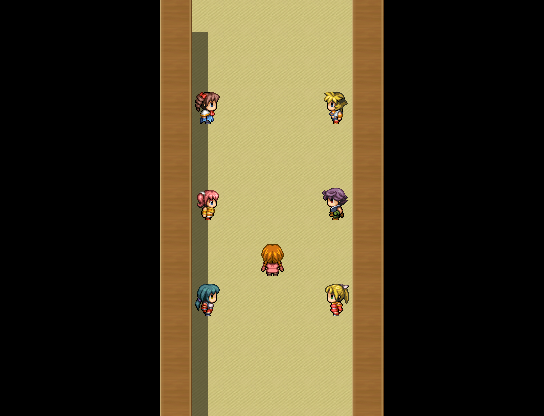 Overall this is a linear experience, and the only choices and options we get do not let us witness a different ending, just to underline the inevitability of the tragedy. The game gives a clear representation of the state of depression that can be probably understood even by those who did not experience it, and it's easy to emphathize with Annie.

Visually there is not much to say bout this game: it uses no facesets, and just Rtp assets, but I must say that the only real map (the bedroom) is competently made, there are no error or bugs.
Music consists in three mournful pieces from Incompetech, that fit the sense of sadness and depression, enforcing the already powerful atmosphere.

Final Verdict
Blank Space is a game that's almost impossible to rate, first because it's very short, and second because it cannot be defined as just a "game" but much more. Love it or hate it, this is an experience, that will surely move the player, so it has an important meaning and this is the reason why I'm writing this review.
If you have five minutes, well I'd suggest you to play this game since it's interesting, really, and it's amazing how the author was able to convey all these feelings in just five minutes through words, music and gameplay (the slower and slower moving part). Impressive.