It's here on steam
https://store.steampowered.com/app/1450650/Osteoblasts/

Go get it, quickly.

Hello living beings, those who still exist can download the demo right here right now. It has around 20 or so minutes of gameplay, going up to the Dog boss and finishing very abruptly.

No idea if saves will work in the final game so don't bet on it.

Final release is set to February 2021. All content is done and the next few months will be dedicated to testing, balancing, bugfixing, QA and all that stuff.


Thanks and go play it.

Unlike the characters, the game is not dead

...I just really keep postponing updates to include more stuff.
But, well, work has been mostly base map definition, events and database focused, which doesn't warrant pretty screenshots so I'll post random places. 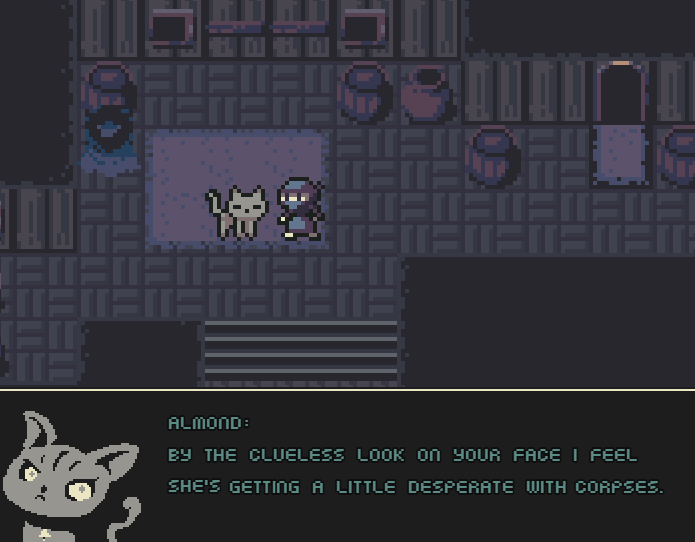 I wanted a progression system which could evolve on its own, so I took a while to both figure out and implement both a level and exploration-based scalling to enemies and items.
Using DreamX's random affixes was key to this, allowing me to create empty tier-specific weapons and armor and have them drop on a party level based common event. Prefixes control random attributes of the item while Suffixes are the base items themselves, giving specific skills from a tier defined pool.

These tiers can also be unlocked prematurely by completing the first four main Dungeons, in any particular order, which will make generic chests drop stronger equipment. 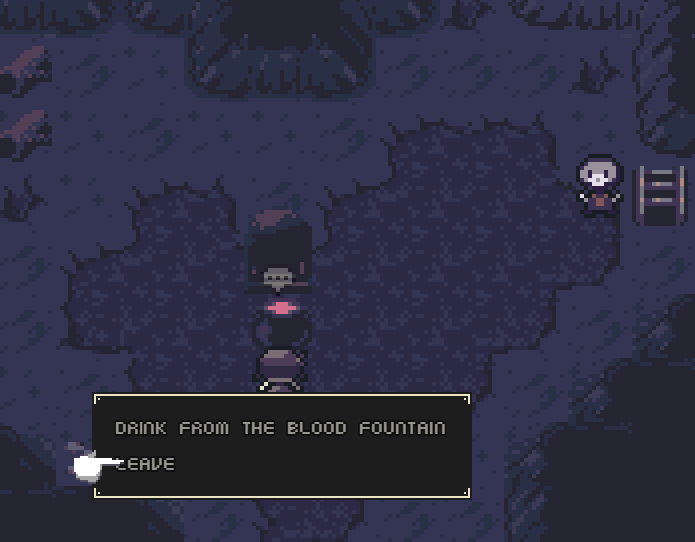 The stat system has also been adapted, as skills will calculate their damage based on a combination of stats, so characters should be built with a consideration to that. 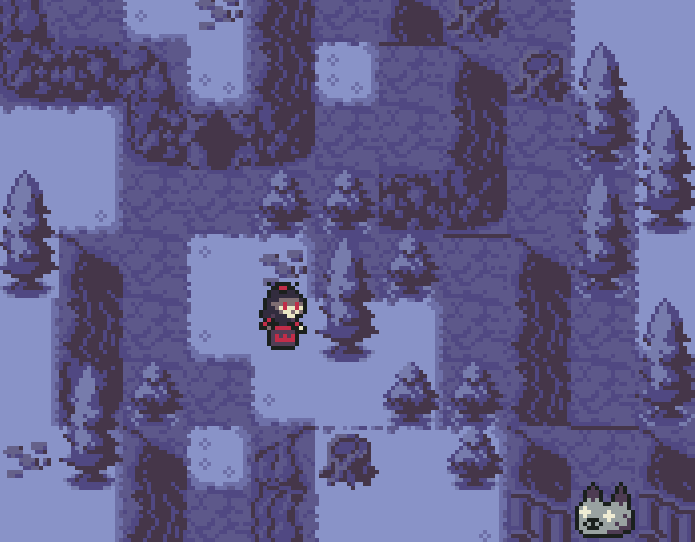 Maps are mostly set in place for the majority of the game, with a focus on interconnection by themselves over a World Map with separated locations.
As such, there will be a large amount of obstacles cleared by items and equipment.
Fragile Pickaxes will break an unsubtle boulder once, but stealing the Miraculous Drill from the Spooky Mole Rabbits will grant eternal boulder-breaking ability.
The Scientist may be able to harvest ingredients for the Dissolving Acid, which serves a similar purpose. 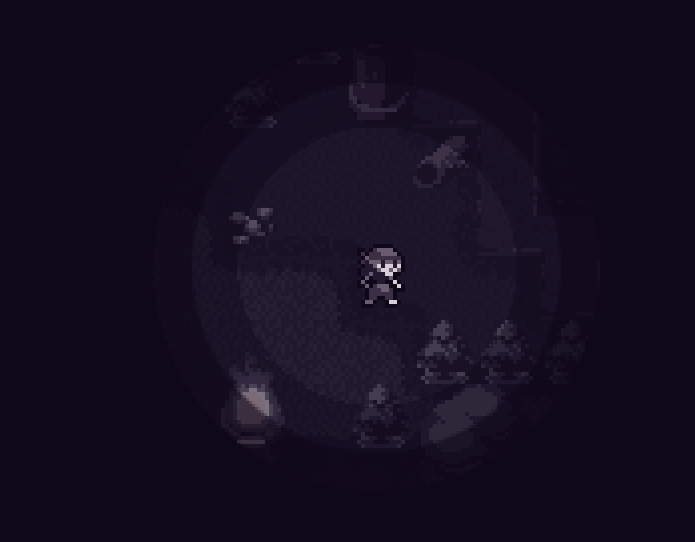 With the mechanics set, maps connected and all that, the next milestone should be to add in assets for every dungeon to keep them apart from each other, as well as the final Time Tower, which draws skeletons from all over the underworld in order to reach the top, but none has dared enter it yet. 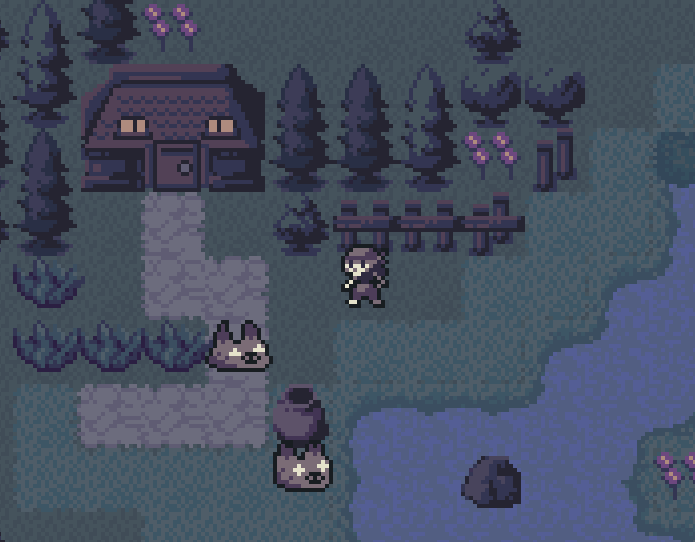 Most story sections are sketched and making a bit of sense, which will point characters to different corners of the world for their personal quest, depending on the class chosen at first.


A lot remains though, but I'll think of a release date sometime soon. Don't know if I said it anywhere but the game will be free when it's done, so please look forward to it! :3 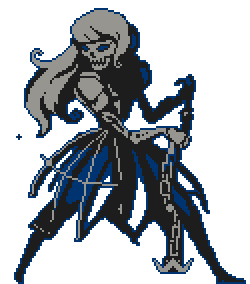 Some info on the Blast Battle System

As much as a post explaining some mechanics as well as looking for some feedback since I have the tendency to go a bit overboard with stuff that don't make sense, here's some more in-depth features of Osteoblasts' semi-homonymous Blast Battle System! 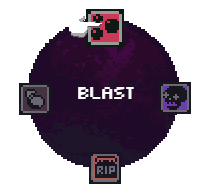 Unlike in life, Skeletons fight much differently in death. They don't measure their staying power with "health" or "life" but instead find some different uses for what most creatures utilyse for staying alive. Skeletons rely in their three meters Bones, Blood and Armor during combat.

Blood is a very important resource for skeletons, but they surely won't pass out if they run out of it, instead only being temporarily defeated if all of their Bones have been broken.

When using the battle command Blast, skeletons will be able to attack, defend or support allies with Blood-based skills. As their bones produce Blood internally when being hit by enemies or naturally through their Rest command, Blast actions will channel available Blood to deal damage, spending some of the total available.
It's very necessary to keep a track of available Blood in battle to perform more efficient Blasts. To increase maximum available Blood, skeletons must equip many different items or follow the path of the Bear Goddess.

To gain new Blasts, skeletons can also equip themselves with new items. Each weapon, shield and the two availabe Gadgets will grant terrifying skills to be used.

Casting Blasts isn't that simple, though. Players must press the right Directional Key before the timer runs out or the Blast won't have any effect. 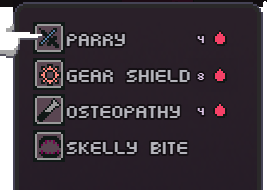 For Defense, both skeletons and all foes rely on Armor.
Armor will take full damage instead of Bones if available, but each point of damage taken will reduce current Armor, which can then be increased up to its available maximum through Defensive skills in general. If no Armor is available, Bones will be damaged instead. Skeletons can't move around if they have no more available Bones.

Whenever anyone in combat is hit, they won't just shrug it off as well. All battlers counter-attack immediately when struck. Counter-attack damage will depend on the remaining Armor the defender has remaining. Cautiously removing enemy Armor through several means is very important to not fall through a powerful counter-attack. 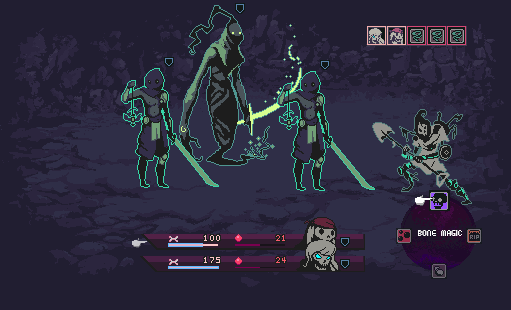 But more importantly, skeletons are very adept at casting Bone Magic.
Bone Magic will damage enemies based on the skeleton's remaining Bones. If they took too much damage, their magic won't have enough Bones to challenge the elements through and their power will be reduced.
Skeletons must be very careful as all Bone Magic will also spend some Bones to be cast, but their effects cannot be counter-attacked by any means, making them the perfect "opener" skills.

Much like Blood, Bones are also recovered through the Rest command. Resting also puts the user at the back row, protecting them from being targeted by enemies, but not from counter-attacks. Only one skeleton may be in the frontmost row at once, ensuring that players can control who's tanking damage very efficiently and visually.

Controlling stats which dynamically change in battle is very important to succeed both offensively and defensively.

And that's basically it for the game's battle system! I'd be very grateful for any feedback on it as I work on a playtest-ready version for the game!
Pages: 1