Hello and welcome to this review of Geiken.
Geiken is a RPG Maker VX Ace complete game by Orgaya released in 2018, that may look pretty ordinary from the screens but it is not! From the absolutely mysterious intro in which we know our alter ego, to the unusual real-time action combat and the open-ended nature of the game that provides different choices and endings (six, to be precise) this is an epic adventure unlike any other rpgmaker rpg you played before.

The game starts with the "birth" of the hero, Peren. Who is him? What's going on in this game? All starts shrouded in mystery as we learn the basics of the game. Our hero is a glassy-eyed guy with fiery hair, whose personality will be defined by the actions and dialogues chosen by the player. The world around him is apparently a classic fantasy scenario, with peasants and monsters, but something is not right. Our hero has also visions and weird things will happen during the course of the story, that's pretty long and after a while it will start with a trip to the mainland to deliver a package to a certain Vincent. 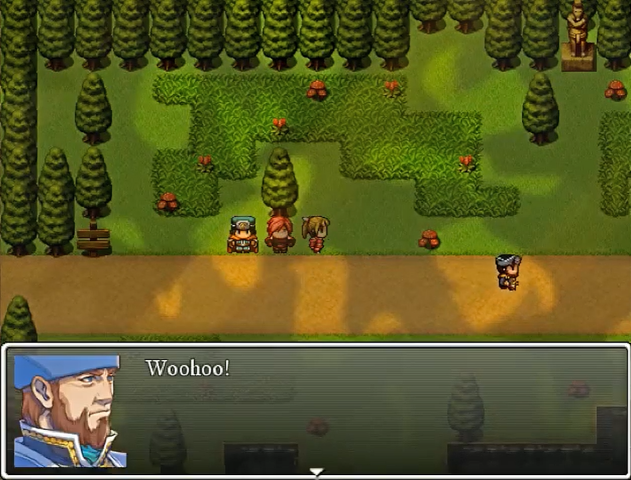 This game is serious & mysterious but not without some funny moments!

Geiken is an open world action rpg, and for an rpgmaker game it's pretty much unusual: maps are really big, there puzzles and many quests, some mandatory to finish the game, and some are optional but that guarantee extra loot, items and companions.

Oh yes, even if combat is in real time we can have a party of characters, but let's explain how it works: game combat recalls the old Zelda, since we move our character and attack with the equipped weapon, starting from an old blunt sword and improving with new equipment that provide more range and/or damage. We also start with a healing spell that's pretty handy since mana is recovered during combat in a matter of time, and it heals all the party (and later resurrects once you find a particular artifact). The other party members are normally inactive and stand behind our hero, but pressing "S" they will rush to attack the nearest opponent. Keeping "S" pressed will instead make them retreat, and luckily we can see their health conditions exactly like for our protagonist. It's a system that looks like a very simplified version of Overlord, but it works very well, the AI characters are actually good and helpful in combat (gotta catch 'em all)! 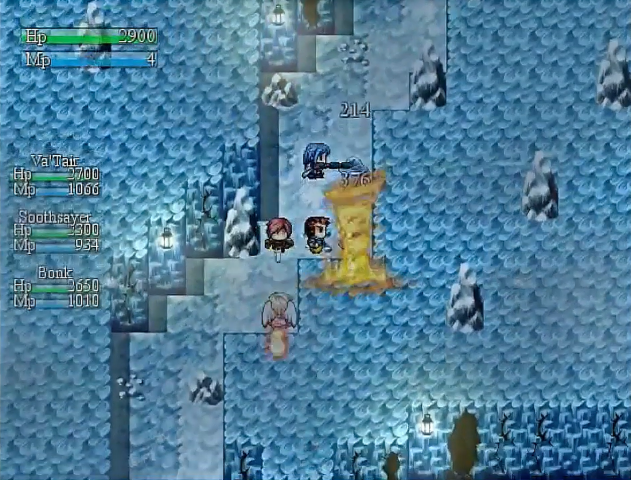 Battles can be quite chaotic once you have a full party involved!

Combat is for the most part quite easy, I mean slimes and bats are a joke and even the various humanoids are a moderate threat, but things will clearly change when we'll have to face the bosses that the games throw at us, some quite challenging and others very difficult to beat! For this reason remember to use your potions and skills at the right time, but expecially save often! Save points are represented by bunnies, but for what I understand you can simply save anytime directly from the menu!

Besides combat the game has lots of quest that involve exploration, finding characters and items, but the most interesting aspect is the world building: even if mapping is for the most part not impressive at all (especially the dungeons, and yet there are no errors or problems) there are huge locations to visit, so huge that even if you keep dashing around it will be still not enough and you'll welcome the fast travel option (that includes, you probably guessed that, first a ship and then a flying ship! Classic!), that sadly is enabled only during the final parts of the game. 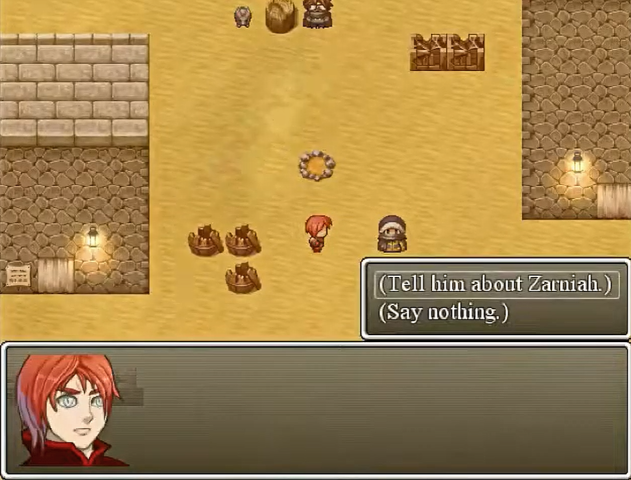 Decisions, decisions, this game is full of choices and some matters more than others, of course!

The setting, despite the bland appearance of the classic graphics (that if you played a bunch of other games, you have already seen one thousand times), is intriguing: there are many books that you can read that explain some particular aspects of the world, the story is captivating and very well written, and occasionally you have some choices to do that will change some details, with options becoming available or unavailable based on the decisions made by the player (but please ignore the special walkthrough that comes to the game that explain how to get the various endings and how some choice affect the events and play blind, like I did!). The lack of guidance may sometimes be a problem if you do not know what you are supposed to do next in some cases, but on the other hand the interfaces are excellent and the quest log is pretty useful.

Ok, I've already mentioned that the graphics and mapping aren't that special, still not ugly (I like the use of effects like darkness and fog, always effective and never excessive), on the contrary the atmosphere of some locations is powerful and the use of music excellent. All good? Read further! 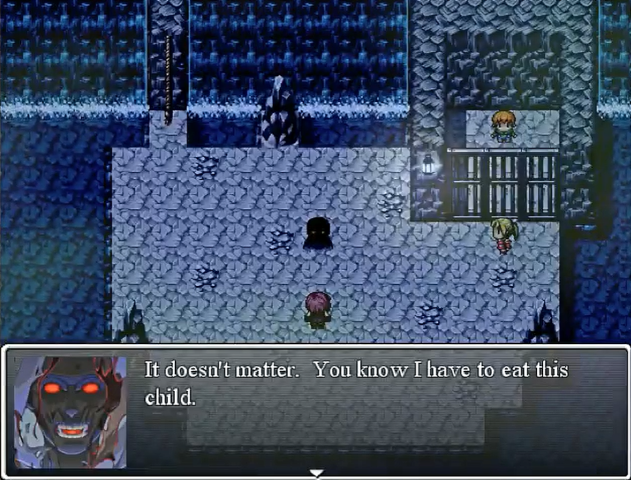 This game includes some battles against bosses and the child eater Gezden is just the first!

Final Verdict
Despite the apparently unassuming appearance, Geiken is a very peculiar and entertaining game, still not perfect due to some minor issues: the lack of direction in some parts (understandable due to the open-world nature and freedom of choices of the game), some glitches and typos, and the bland graphics that in some parts are used better than in others, but still look pretty average from the most part. But well the gameplay is very fun, and the story rather original and very interesting. Yes, I admit I was captivated by Geiken's bizarre beginnings, and I kept being entertained by the fun combat and exploration. It's a long and fun game that I believe many people would not enjoy since they would stop judging it from the cover. That's sure!