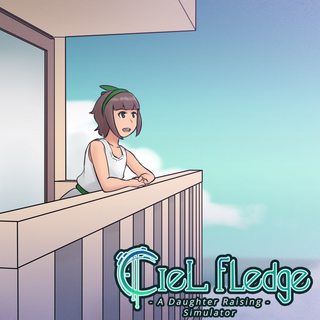 Hi everyone, despite being late for more than a month. I'm here to announce that Ciel Fledge development is finished and the game can be bought at Steam or Nintendo game store (Switch version)

At first I was hesitating to post the link page here, because, well, I feel that since this is primarily an RPG Maker games site, it's inappropriate to post a commercial game made with another engine here and I don't want to steal the spot that better reserved for someone else more deserving.

But then there are people that only found out about this game from this game page on this site. I'm obliged to let them, and the subscribers know about the status of this game.

With that in mind, there you have it, the announcement that the game is finished and ready to be played!

I want to thank RMN for hosting our game in this site and their support. I get into game development from making an RPG maker game, Ciel is also made with Rpg Maker MV at the beginning before we decided to switch engine. That's the two main reason why we posted the game in this website. We have always been an RPG Maker developer and this is our second commercially released game. Time sure is moving fast, I don't know what's next for us but for sure you can hangout and maybe chat with us on our discord server here: discord.gg/studionamaapa