I'll admit that this was one of the games I wanted to try out when I was covering entries for the 2017 Indie Game Maker Contest, but I never really gotten around to it. So, I suppose putting a bounty on this game finally gave me the motivation I needed to go back and take a look at this game. 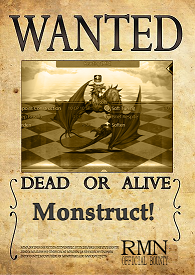 On the downside, I find myself struggling to know what to say about this project. Especially seeing as how I can't help but feel like this game is a vastly inferior version of titles like "Atelier Rorona: The Alchemist of Arland" by Gust Co. Ltd. In fact, I wouldn't even be surprised if the Atelier series was part of the inspiration behind this project.

And to make matters even worse, "Monstruct!" places a heavy emphasis on my least favorite aspect of those games. That being the need to dedicate my crafting skills to building stuff for other people. In fact, my hatred for spending my time on crafting stuff for other people is the main reason I haven't played through a lot of the newer Atelier games. As you can imagine this means I'm probably one of the worst possible people to score this game. After all, I'm tempted to give it a lower score then it deserves solely because of what it is. As a result, I'm not going to be giving this game a quality score at all. That being said, I should probably move away from this introduction and start talking about the narrative.

You play as a young and upcoming monstructor who dreams of being the best of the best. The goal of a monstructor is to build robots that are placed into dungeons in order to distract greedy heroes from finding the homes of actual non-humans. Yeah, the humans in this game's reality are horribly racist apparently and are always hunting down monsters in a bid for experience and loot.

Though where I think the narrative in this game fails is that the game stops when you get the biggest request of your life. An order so big that it would be impossible for even the most well known of monstructors to complete on time. At least until you came along. In a way it feels like the game should start at this point with your character on a tight deadline to complete the order on time. Instead the game starts to roll the end credits at this points and jumps to you having completed the order successfully in the post game content.

On the gameplay side of things, you merely build robots in order to fulfill various citizens needs. Of course, the method of building robots feels like a puzzle where you need to balance out quality with building the robots within a certain number of turns. After all it uses up a certain amount of CP (concentration points) or SP (skill points) every time you issue a command during the construction process. Of course, the most interesting thing about building robots in this game is that you may get a high quality version of a robot even if your quality gauge isn't full, and by the same token your robot may be a success even if it's construction is only halfway complete. As a result your success sometimes feels like it hinges on the goddess of RNG deciding to smile on you.

Honestly, I only really noticed one minor bug while playing this game. Though, I suppose if I went poking around a bit more I could find a few others. And it looks like the developer hid at least one by using NPCs to block you from getting to floors within the library that had graphics that were starting to trip up from layering.

That aside, the game sometimes fails to blow up a robot when its progress meter reaches zero. On the plus side, I have no idea why or how this happens. So at least I can't trigger it on purpose in order to give myself some sort of technical advantage in the game.

On the graphical side of things the game feels rather average for the most part. While a few maps do show off the developers skills at layering his maps so you can walk underneath trees and whatnot. The bulk of the assets appear to come from the RTP or commonly used add-on packs. As a result the game doesn't really stand out from the crowd all that well. Though a few assets appear to be entirely custom.

On the musical side of things the game starts out rather odd with the title screen being entirely devoid of background music, but oddly enough this a plot point. After all, if you start a new game you'll find out that your wingbuds are broken. As a result you can't listen to music.

"Monstruct!" is a game that can really struggle to get the player involved. After all, you really don't feel the sort of time crunch you'd expect in a game like this. In fact, the game goes out of its way to setup such a scenario just to declare that you've beaten the game by getting to that point. As a result, it's hard not to feel cheated out of an actual challenge. Outside of those issues I suppose the game is alright, if not tad boring after a while. After all, I'd rather construct monsters to serve my own ends in combat then just to hand over to others.