Hello everyone, today, I have something special for you all. A lot has been going on in the shadows, so it's time to shed some light on everything. Without further ado, let's get started!

Today I'll be discussing the following...

Starlight Park
Starlight Park is a neon-lit amusement park and modern city that lies high in the sky. This stage is primarily inspired by park stages from the history of Sonic the Hedgehog like Starlight Carnival, Toy Kingdom, or Night Carnival to name a few. 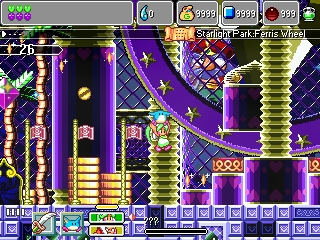 Stronghold Ruins
Stronghold Ruins is a stage that lies to the north of Mute Tower. Since Asha had stopped the sun from disappearing forever in Monster World 4, the ice in the desert had melted and revealed areas that had been buried in snow and ice. Within lies a certain item needed to create the Ultima Elixir. 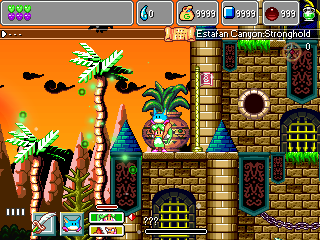 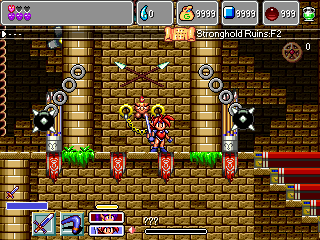 Popful Mail! Yes, that is right, this game won't just feature characters that the title suggests. Will there be more than one guest character? You'll have to wait and see...

Hero Fruit: A Hero Fruit is an item that increases your performance in battle for a short time. Perfect for those who need that extra boost in combat against tough bosses or stages.

Iris Leaf: An Iris Leaf is an item that boosts you out of a pitfall if you have one. As this is a platformer, there will be plenty of pitfalls, so carrying these are crucial for curious adventurers and those who need the extra help.

Treasure Crystal: An item that points to treasure chests, life drops, and synth crystals. This item isn't gained initially (of course), but it will be useful for when you want to revisit areas to find out what you missed.

The world of the game is open, but with challenges scattered everywhere. Some challenges will have you simply going to the end of the stage. Others will have unique objectives that act as both a mission mode and an in-game challenge mode. 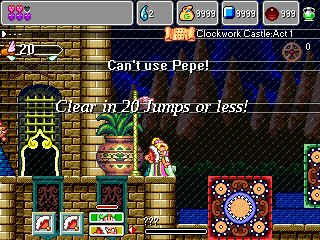 This one in particular will keep track of every jump you make. You must complete the stage within the set amount of jumps you are given or the stage will reset.

Throughout the game, you will encounter several mini games meant to either progress or to take a break from the storyline. Themes range from an Endless Runner to a Casino Slot Machine. 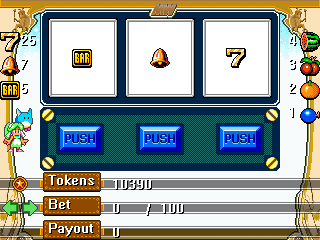 This system is the most powerful form of powering up temporarily in the game. Like a Hero Fruit, you are able to increase your performance in battle in many ways including attack power, defense, critical chance, experience gained and invincibility period. While a hero fruit will only give you about 2 minutes of time. The priestess; Phia will give you 3-5 minutes and increase the amount of each power up. However, they cost money. Phia's blessings can also be powered up via upgrade menu. 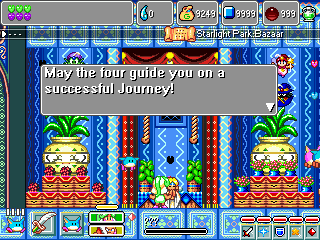 Last Chance is a skill that can be unlocked via upgrade menu. If Shanate or Asha are KO'd, the other will continue fighting. However, whoever is KO'd will revive after one minute with a single heart. This system is inspired by Mega Man X8.

Lately, I've really fallen in love with the Tales of games. One of the things I love most about titles such as Xillia 2 are how you change the character affection based on what happens in the game. With that said, this game now has a bond system in development in which you can earn goods based on what kinds of things you do in the game.

However, not all bonds will be good. If you do a bad action a certain amount of time like jumping in pits or taking enough damage, they will get angry with you. Think of it something like in-game achievements blending with a dating simulator.

In the last demo released, the only way to tell if you completed a challenge room was based on your own memory. Now, when a challenge room is completed, a star medal will appear above it letting you know that it is finished and you have collected the synth crystal within it.

Conclusion
There are a wealth of other things that I have in store for the future, but I believe this is enough for now. A new demo is being planned sometime soon, so be sure to keep an eye out for it. See you all next time!