Alright, I am back with a new and slight update on the game and it's current state. We'll be talking briefly about the new Talisman System and other things that have been tweaked/added since the last update.

The main reason why this was added was due to a ton of unused content in the original Monster World 4. There are many images showcasing content that was scrapped, but still exists. However, due to the poor image quality, I was unable to recover the exact "pixel for pixel" quality I wanted. This is the image or those who are curious. 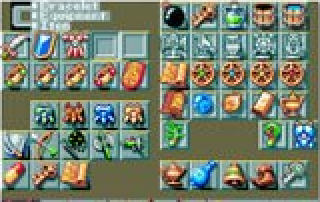 Now, if you look closely enough at the top left hand corner, you'll see three tabs that say bracelet, equipment, and item. Apparently,there was supposed to be a bracelet system in which Asha equipped to her arms and wrists.

Since this game is mostly focusing on reviving unused systems and content while adding new things, a new system was added in place of the usual "Equipment" option(at least for now).

The official definition of a talisman is "an object that someone believes holds magical properties that bring good luck to the possessor or protect the possessor from evil or harm." This means that a lot of these will be ones that are luck based and some can even give you a bonus stat or ability.

Here are a few talismans you will end up using in the game...

As of now, there are a total of 21 you can equip, but as you'd expect there are a limited number you can equip at once. You start out with 2, but you can earn more slots via the skill grid which at the time cost 10 Synth Crystals each. If you notice at the right, you'll see a bar and a number. The number is how many slots you have left and the bar is to show how many you have equipped at the time. Depending on what kinds you equip, it can create some interesting effects that are a must have in certain boss fights. 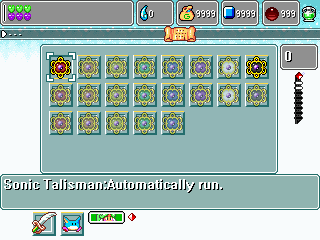 I'm sure Final Fantasy fans will recognize this...

That is all I have for you all at the moment. When chapter 1 is solid enough and all the games mechanics are explained within it, another demo will be released. Until next time!